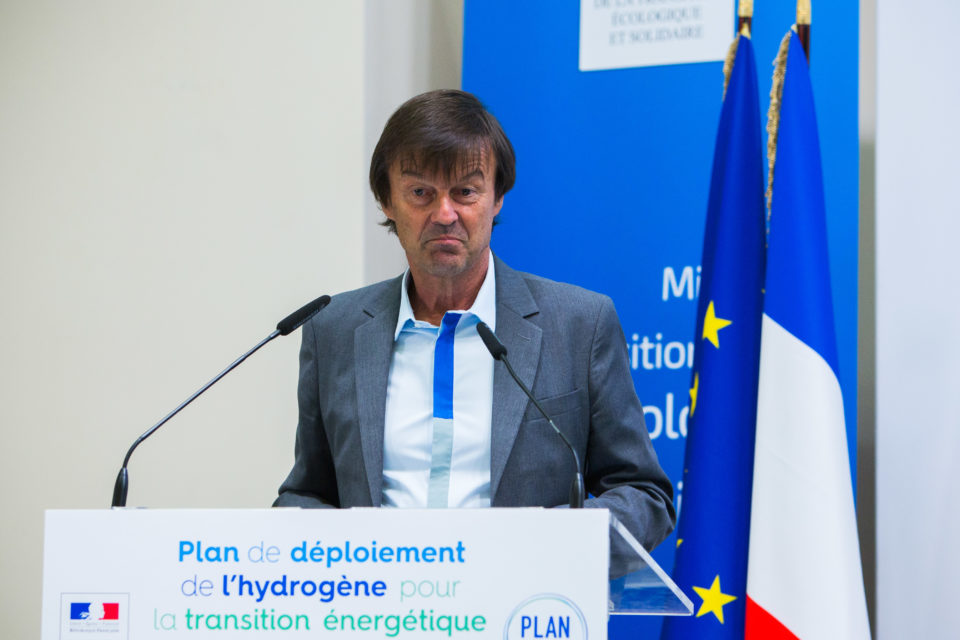 Nicolas Hulot, Minister of Ecological and Inclusive Transition presents the hydrogen deployment plan for the energy transition in Paris, France, on June 1, 2018 /Abacapress

Is hydrogen (H2) the miracle molecule that will allow humanity to succeed in its ecological transition or just a fata morgana? Pro and contra protagonists are facing each other with knives drawn.  French newspaper Le Monde draws up the balance sheet.

Beginning of June France’s Minister of Ecology, Nicolas Hulot, presented his plans to make the country to become the leader of this emerging technology and put aside 100 million euro to support small initiatives.

Hydrogen is already known since the 18th century and saw one of its first practical applications in the 20th century when the German earl Ferdinand von Zeppelin filled its airships with the gas that is quite lighter than air.

But after the explosion of the Hindenburg in 1937, enthusiasm cooled down. As the gas explodes in contact with oxygen, it was considered far too dangerous, while petrol and fossil gases were more easily to manipulate, to stock and to transport.

Hydrogen remained the first choice, though, for rockets, after the second world war. The gas with its three times more energetic density than fossil fuels, is well suited for rockets, which need the most effective fuel.

But after 30 years of the earth warming up because of CO2 produced by burning fossil fuels, hydrogen is back in the picture. Its combustion doesn’t emit CO2, nor any other polluting matter, and pure water is what is left in the end. The water can be used to produce hydrogen again. It looks like the ultimate Swiss knife in energetic transition.

American economist and activist, Jeremy Rifkin, sketched the ideal world in 2002 in his book The Hydrogen Economy with locally used and locally produced hydrogen, with the help of renewable energy from wind and solar farms. The idea is tempting and gets more and more support, but lots of energy experts remain skeptic.

‘Hydrogen lobby is a sect’

“The talk of the hydrogen lobby appeals to some fanatics, is full of good intentions, but is not credible”, says an anti-hydrogen protagonist, who tags the opponents as ‘a real sect’. The latter say “the anti-hydrogen people, often of the pro-petrol lobby, live in the past and defend their own terrain”.

Hydrogen seems a way, though, to ‘decarbonize’ many sectors, among which the refining and chemical industry, which uses 85% of the 60 million tons of hydrogen produced today. The energy sector is interested because at least theoretically, by injecting H2 into the gas network CO2 emissions can be reduced.

And the transport sector believes in it, thanks to the fuel cell that converts hydrogen into electricity and water (H2O), and can be used to bypass fossil fuels in all kinds of transport: cars, ships, heavy trucks, buses, airplanes…

Hydrogen won’t replace everything, according to a study by McKinsey: 20% of all energy consumption in the future will be hydrogen-based, compared to 2% today. Some 40 multinationals, among which big names like Air Liquide, Toyota or Engie, united in the Hydrogen Council, adhere to this theory.

“In the long-term the industry has to start the process of decarbonization and I don’t see many alternatives for hydrogen”, Pierre Etienne Franc of Air Liquide says. Electricity producer Engie is bedding on hydrogen too, with the creation of a special division, as do several car manufacturers, like Toyota, Hyundai or Daimler.

Hydrogen vehicles can be an alternative for the long distance, replacing battery-powered vehicles with a limited range. Today some 7.000 hydrogen vehicles are roaming the world’s roads, with 300 stations to fill them up. Toyota foresees a fleet of 1 million hydrogen cars by 2030 and several thousands of filling stations.

“If you look at the projections of the car industry, hydrogen is hardly present at the horizon of 2035”, Oliver Appert, president of the French Council for Energy and former chairman of the French petrol institute counters. “Why? Simply because the network of filling stations doesn’t exist.”

For Franc (Air Liquide) it’s the ‘what came first discussion: the chicken or the egg?’. “To make a hydrogen station, costing 1 million euro, profitable, you need users with a hydrogen fleet. Like the station in Orly near Paris, which is running at full capacity thanks to the fleet of Hype taxis coming to fill up.”

For the railways, the situation is different. To decarbonize one can electrify the lines or use an electric train with batteries or hydrogen. Batteries are still too heavy and limited in range and electrification of the line costs 1,2 million euro per kilometre.

So these are no options for the 60% of German non-electric railways today, says Jörg Nikutta, CEO of train builder Alstom in Germany and Austria. “Our hydrogen train will replace diesel trains in a more economically way.”

Produced in a clean way

The ‘clean’ alternative is electrolysis of water by using renewable electricity. Today ‘clean hydrogen’ like this costs 4 to 6 euro per kg compared to 4 to 5 euro per kg by the petrochemical way, points out Florence Lambert, CEO of the CEA-Liten research institute.

But Oliver Appert calls the idea of using surplus electricity from renewable sources to make hydrogen not realistic. “The hours of surplus production are very limited. Only Danmark or the north of Germany have enough surplus green electricity and even there questions are raised.”

Apparently the Germans started to invest in 2011 to store surplus energy in hydrogen, but they realized in 2014 its wasn’t the solution to the problem and decided to transfer the electricity from the north to the south of the country by high tension lines.

Costs of transport and storage

Last but not least, there are not only production costs, but also costs of transport and storage, as hydrogen has to be put under high pressure making handing more complex, says Paoli Franki, director of the International Energy Agency (IEA). “Hydrogen is interesting, but not for transport or storage of electricity on the short-term. Biggest gains are to be expected in the chemical industry in the next ten years.”

The French IFP research institute (with ties to the petrol industry) calculated that a carbon tax of 300 euro per ton would be needed on fossil fuels to make hydrogen competitive, regardless of the technical evolution in more efficient electrolysis.

“It looks like hydrogen always will be more expensive”, concludes Air Liquide’s Vice-President Hydrogen Pierre Etienne Franc. “But its the price we have to pay for decarbonization.”

Rifkin’s making the same mistake with his Third Industrial Revolution like he did with his Hydrogen Economy.He has no idea
of the cost involved in making the switch to a alternative fuel.Another thing he’s forgetting is that people making the switch
to renewable energy expect to save money on utility bills.What he’s proposing could end up costing people in the long run. 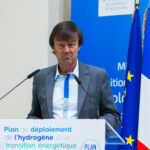