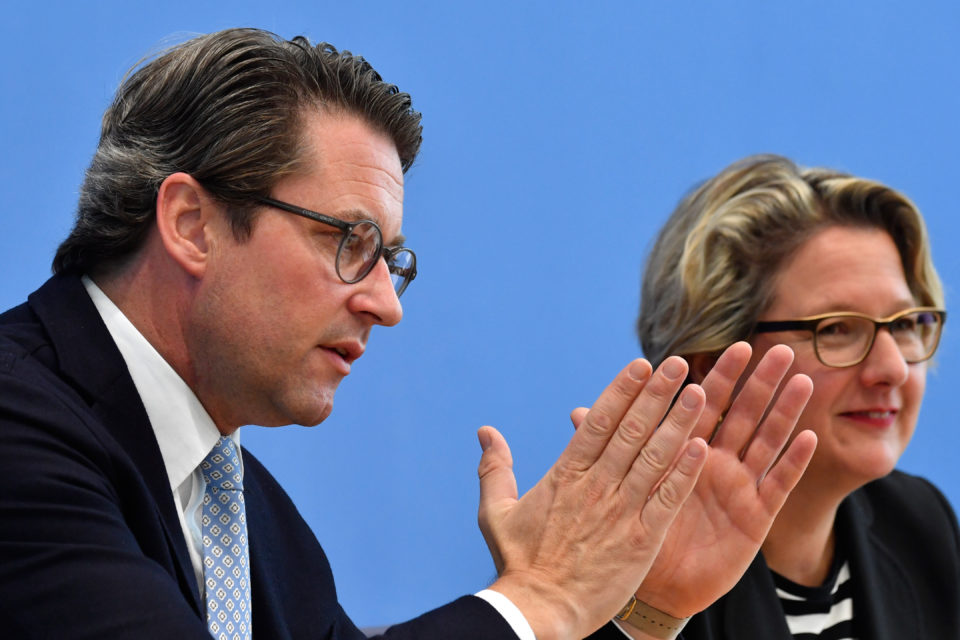 German Environment Minister, Svenja Schulze (R), and Transport Minister, Andreas Scheuer, explained on a press conference in Berlin how the government wants to make the German car makers pay for the trade-in or upgrade of millions of older polluting diesel cars /AFP

After a long nightly debate on Monday, the German government coalition has reached an internal agreement on how to make German – and foreign – car makers pay for premiums and hardware updates for owners of older diesels in fourteen cities with high air pollution. This could cost car makers 6 to 12,5 billion euro for the upgrades alone.

“We want to avoid driving bans in cities and if they are not avoidable, we want to avoid the drawbacks for the citizens who are dependent on individual transport”, the government’s paper states. “This goes for financial drawbacks as well as for usage limitations. The car industry has a high responsibility in this.”

Owners of older diesel cars with Euro 4 and Euro 5 standard will get an offer with a premium to trade in their car for a newer one of the latest Euro standard, brand new or even a used car. How much this premium should be, wasn’t detailed yet in the nightly agreement.

For Euro 5 diesel car owners a second option is to have their car retrofitted with NOx filtering hardware, payed for by the car makers. Although aimed at the German car makers and Volkswagen, which was at the base of the dieselgate scandal that broke in 2015,  in the first place, foreign car makers will be expected to make an offer too.

The forced measures with premiums and hardware updates could cost the car makers 6 to 12,5 billion euro, German experts like Stefan Bratzel from the Center of Automotive Management (CAM) calculated on Tuesday. Bratzel estimates a mere 2,5 million diesel cars should be updated, costing between 2.500 and 5.000 euro per vehicle.

These measures won’t affect the whole German territory, but will be applied in and around 14 cities with especially high NO2 emission levels that could be forced by German Justice to ban the most polluting diesels in the near future.

It won’t be limited to people living within the city limits, though, but will also be valid for people of the neighbouring districts or the so-called ‘Landkreise’ and people even living farther away, but who have to travel into the city for business on a regular base or self-employed people, owning a business in the city.

Question is now how far German car makers will be willing to go along. BMW and Daimler already decided not to comment before the government has released further details. Opel – now owned by French PSA Group – already said on Tuesday it is radically opposed to hardware updates payed for by the manufacturers and says this is ‘technically not feasible’.

Earlier in 2017, German car manufacturers already offered premiums up to 10.000 euro for owners of old diesel cars to trade it in for a new one. More than 200.000 of them qualified for this offer, the industry said in July.

Birth of a mouse

Jürgen Resch, president of the environmental organization, Deutsche Umwelthilfe, who has become the thorn in the flesh of German car makers after suing the cities of Stuttgart and Düsseldorf for not complying with European NOx standards, calls the government decision ‘the birth of a mouse’.

He says the trade-in premiums are not to get cleaner air by switching to effectively cleaner cars, but “only to guarantee the mobility” of the people affected in the cities. Retrofitting of exhaust filtering systems is ‘wishfull thinking’, according to Resch.

Industry expert, Ferdinand Dudenhöffer, from the CAR Centre for Automotive Research is rather sceptical that it will come to a new large-scale trade-in action. He thinks chances are high that the existing rebates offered will be ‘converted’ into the new ‘environmental premium’.

“There are lots of rebates offered today in the car business and more than 200.000 old diesel cars weren’t ‘fished off’ neither with last major trade-in action”, Dudenhöffer told the DPA press agency. 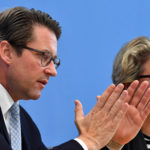