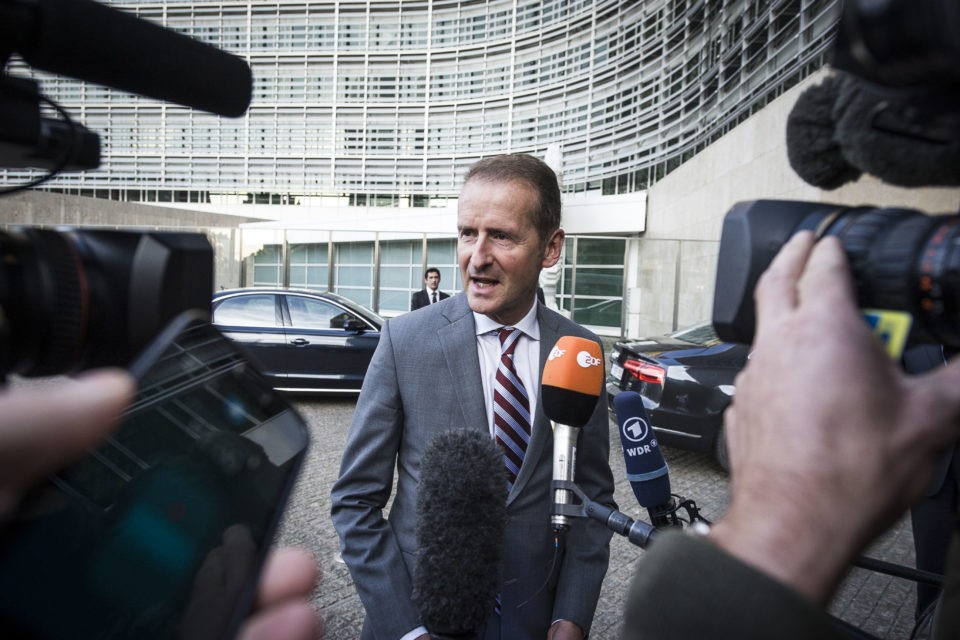 VW CEO, Herbert Diess, here pictured before reporting to the European Commission. Dieselgate has caused a real attitude change with EU politicians. Is the power of the car industry waning? /Eyevine

The European car industry reacts furiously to the 40% CO2 reduction targets voted in the European Parliament last week. “The vote proves that the power of the car sector is waning”, says Kathleen Van Brempt (sp.a), Belgian member of the EU Parliament and former president of the so-called dieselgate commission.

The reaction of the industry on the EU proposals is very harsh: “The car sector is not a cow you can milk dry just like that”, says a furious Erik Jonnaert, secretary general of ACEA, the association of European Car manufacturers.

Europe is increasing the pressure

The car sector didn’t have a nice time last week. The German government forced car manufacturers to foresee a premium for clients who want to swap their old diesels, the EU parliament voted a CO2 reduction proposal that goes 10% further than the one the Commission had proposed.

Erik Jonnaert from ACEA indicated that he was “very disappointed” after the vote. “If Europe is defining too aggressive targets this will have a serious impact on employment. Factories will close, that’s a reality.”

The EU targets for 2021 (although also contested by the manufacturers) are still fairly easily obtainable with conventional (ICE) engines, but the goal set for 2030 is impossible without a big increase in electrified cars. And the market still doesn’t seem ready for it: only 1,5% of the registered cars last year in 15 western EU-countries were electric.

The German manufacturers have put a lot of money in developing a ‘clean diesel’ alternative, as diesel engines produce less CO2 on average than petrol engines. But now that the diesel market has partially collapsed after the dieselgate scandal reveiling diesel cars are emitting far more harmful NO2 than allowed, European manufacturers have a problem.

The world biggest automotive supplier, Bosch, claimed in April 2018 a breakthrough in clean diesel technology, reducing NOx emissions to 40 milligram in busy city traffic or even 13 milligrams per kilometre in best circumstances in real driving conditions. The European legal limit is 168 milligram today. But as experts say: “nobody wants to hear this anymore“.

“The car sector uses internal combustion engines (ICE) for more than 100 years and they still make a lot of money with it”, says William Todts, director at Transport & Environment, an environmental lobbying group. “They don’t want to stop this too quickly.” Last year the six biggest car manufacturing groups in Europe gained 37 billion euro profit out of a 500 billion euro turnover.

The car sector is also using the danger for job losses as leverage to soften decisions. It points out that the above mentioned six big car groups employ up to 1,5 million people. “We are and will stay an important employer”, adds ACEA’s Erik Jonnaert.

When things turn bad, the car lobby counts on its most loyal partner: Angela Merkel. The German Chancellor has already announced that she sticks with the 30% reduction of CO2 emissions in 2030, the earlier proposal of the European Commission.

French President Emmanuel Macron holding a gala diner for the automotive industry gathering in Paris at the start of the Motor Show, offered the car maker’s CEOs a deal: he will renegotiate the future emission standards of 2030 if they can tangibly reduce their emissions in the next two years. Current ACEA president, Carlos Tavares, CEO of the PSA Group, has urged French president, Emmanuel Macron, to join Merkel in this battle.

Dieselgate has been a turning point in the political world. Volkswagen’s fraud on emissions has turned a lot of politicians away from the car industry. Local politicians seek popular support with Low Emission Zones (LEZ) in their cities, government leaders like premier Rasmussen in Denmark are declaring that conventional cars with combustion engines can no longer be sold in his country after 2030.

On the other hand, the CO2 emissions of vehicles and transport account for about one fifth of total emissions, so to reach the Paris climate targets politicians maybe also have to look into other sources of emissions, for example, the industry but also farmers and households (heating of houses particularly). A very touchy area when they still want to be elected the next time…

This week will be crucial for the ambitious emission plan of the EU Parliament. A consensus has to be found between the parliament and the EU member states themselves, while many have car producing factories.

“The car industry’s influence is very big”, concludes William Todts from Transport & Environment. “At the moment the pressure is raised at every level. We will see next week if the power of the car lobby has really diminished.” 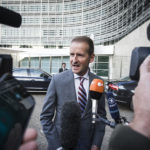