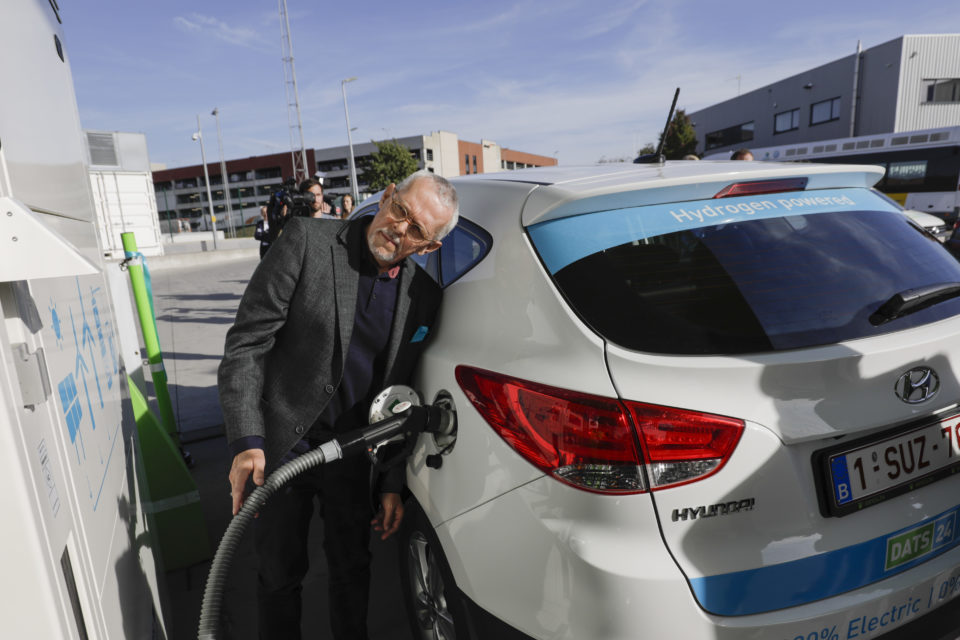 At the Dassenveld site in Halle, Colruyt Chairman and CEO, Jef Colruyt, demonstrated at the official opening of Belgium’s second public hydrogen fueling station he knows how to fill up a Hyundai ix35 FCEV /Belga

In Halle near Brussels, Belgium’s second public hydrogen (H2) fueling station was opened on Monday, an initiative under the DATS24 fuel station brand of the Colruyt supermarket group.

The first dedicated H2 station was opened in April 2016 close to Brussels International Airport in Zaventem by Toyota and Air Liquide. A third (DATS24) will be opened in Wilrijk, near Antwerp, next year.

It’s a European first to integrate a hydrogen fueling station into a traditional fuel station, that also offers electric charging for electric vehicles (EV). The hydrogen installation is part of the DATS24 fuel station at the Dassenveld site in Halle, hometown to the Colruyt group.

Colruyt is a family-owned retail chain, active in Belgium, Luxembourg and France, with 553 own grocery supermarkets and 581 franchise stores under the brand names of Colruyt, Okay and Spar Belgium, employing over 29.000 people. It has made itself a name as price-breaker in groceries, but also as a front-runner in sustainable energy.

With its daughter Eoly, for instance, Colruyt Group, is going to deliver ‘green electricity’ for 2.500 public charging stations the government is installing in Flanders upon 2020. It produces the ‘green power’ with its own wind turbines and solar panels.

Another daughter, Parkwind, is active in the Northwester II windmill park project. The project aims to build 23 wind turbines producing 224 MW by 2020, or enough energy for 220.000 households, some 48 km offshore the Belgian coastline.

At its headquarters at the Dassenveld site in Halle, it already produces its own hydrogen for some years now to fuel a fleet of 75 forklift trucks and 13 company hydrogen cars. CEO and co-owner, Jef Colruyt, said at the opening of the new hydrogen fueling station he believes there is more than one way to sustainability.

“We will need a combination of solutions in the future”, Jef Colruyt said. “The choice of mobility means will be dependent on numerous factors. Hydrogen and electricity are the future for zero emission vehicles, but cars on compressed natural gas (CNG) and hybrids have also a role to play.”

Until now, the only public location to fill up a hydrogen car was at the Leuvensesteenweg in Zaventem, an initiative taken by Toyota, which has its European headquarters nearby, and French Air Liquide, that wants to be a world leader in hydrogen, and has over 300 factories worldwide producing it for different applications.

Every 25 km a hydrogen station

At that time, the Minister for Energy, Annemie Turtelboom (Open VLD), promised there would be 20 or more hydrogen fueling stations in Flanders by 2020, one within every 25 km radius… 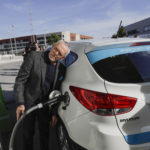