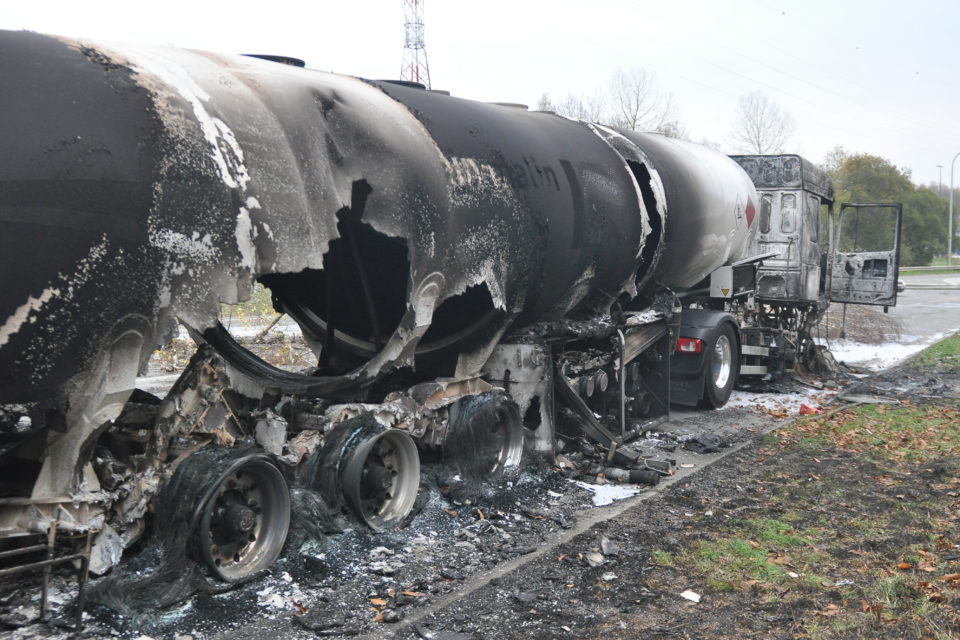 Peaceful protest of the ‘yellow jackets’ detoriated into violent riots that went on during the night. Witness this tank truck set on fire on the road which leads to the Feluy fuel depot of Total /Belga

On Tuesday nearly 400 – one third of the Walloon fuel pumps – ‘dried up’ as a result of the road blocks set up by the ‘yellow jackets’ at major fuel distribution centers in Wandre, Sclessin and Feluy. A ‘civil rage movement’ against high fuel prices that has blown over from France, but didn’t touch the ‘richer’ North of the country, Flanders, so far.

At the Total depot of Feluy, the initially peaceful protest, called upon via social media, deteriorated on Monday evening into some violent riots and confrontations with the police, cut down trees and stakes causing damage to the highway, that had to be closed over a 10 km stretch and even tank trucks set to fire.

Apparently those riots were said to be caused by ‘French hooligans’, who crossed the border to mingle with the peaceful protesters. During Tuesday night several minor street rows were reported in different parts of Wallonia, like a group of 50 masked hooligans at the fuel port of Wandre and a new road block in Courcelles, near Charlerloi, for instance.

It were mostly the provinces of Liège and Hainaut that were touched on Tuesday. Wednesday morning most Walloon service stations were provisioned with fuel again during the night. According to the Belgian fuel federation Bafco, the fuel depot in Feluy was well guarded by the police, enabling trucks to drive out at night.

Meanwhile the rest of the country with Brussels and Flanders in the North, didn’t move at all. Something that the Walloon protesters don’t understand: “They have to be affected by these high fuel prices too, no?”, is heard on a regular base at the road blocks.

In Belgium, diesel prices have become the highest in Europe with 1,61 euro per litre, followed by Italy, Finland, Sweden and the UK. Asked for a possible explanation for the north-south difference, Maarten Matienko, spokesperson of the Flemish mobility organization, VAB, points at the different income levels in the first place.

“Flemish people are wealthier than their fellow countrymen across the linguistic border. If you don’t have a comfortable income, fuel costs are felt harder at the end of the month”. Statistics show that the average yearly income in Flanders is 19.000 euro, compared to 16.800 euro in Wallonia.

Mobility factors play an important role too, according to Matienko. People in the south of the country are living in less densely populated areas rather than in metropolitan areas and have to do more kilometres to go to work or to go shopping.

No real alternative for the car

Public transport is less built out and Walloon people see no real alternatives to the car. That car is often an older diesel car that is consuming more fuel, as people don’t have the money to buy a new, less polluting one. Older diesels, that are also more and more banned from cities like Brussels, so people feel stigmatized and abandoned, fueling their anger.

On top of that, in Flanders some 250.000 company cars are driving around, doing 7,5 km per year, mostly payed for by the boss. In Wallonia, there are 61.000 company cars, doing 2 billion km a year. So you probably you won’t find any company car drivers among the ‘yellow jackets’ today. 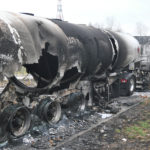