In Antwerp, there will be medical transport by drone from autumn 2019 onward / Helicus

On Wednesday, a command centre for automatic drone flights was opened in Antwerp. This took place in The Beacon, a product development hub where a group of aviation, service and health care organizations under the name Helicus Aero Initiative (HAI) joined forces.

Starting next year, the aim is to transport laboratory samples, human tissue and pharmacy preparations quickly between Antwerp hospitals without the hindrance of road traffic problems. The project should serve as a test case to develop new (traffic) rules for transport via drones.

Helicus is aiming for the autumn of 2019 to have the first drone flight between Antwerp hospitals take place. At the moment, a series of test flights is in progress on a secluded site in Sint-Truiden, as are a number of safety studies.

The drones will initially fly at a height of around 150 meters, where they would hardly be audible and visible due to their limited size and silhouette. The flights will in principle be automatic, but will be monitored by operator pilots in the command centre, who can take over control if necessary.

Expansion to other cities

The initiative to organize Medical drone flights was taken because it is no longer affordable to provide all support functions, such as laboratories and pharmacies in every hospital. Such medical transports would currently also often be too slow over the congested roads.

HAI includes Skeyes (formerly Belgocontrol), aerospace company SABCA, insurer Baloise Insurance, the IT company NSX, software company Unifly and the GZA Hospitals, which originated from the University of Antwerp. In time, HAI also wants to become active in other cities.

The test flights are part of MEDRONA, a project with a financing of 4 million euro, that is supported by the federal government. 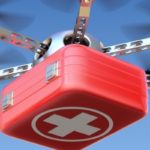