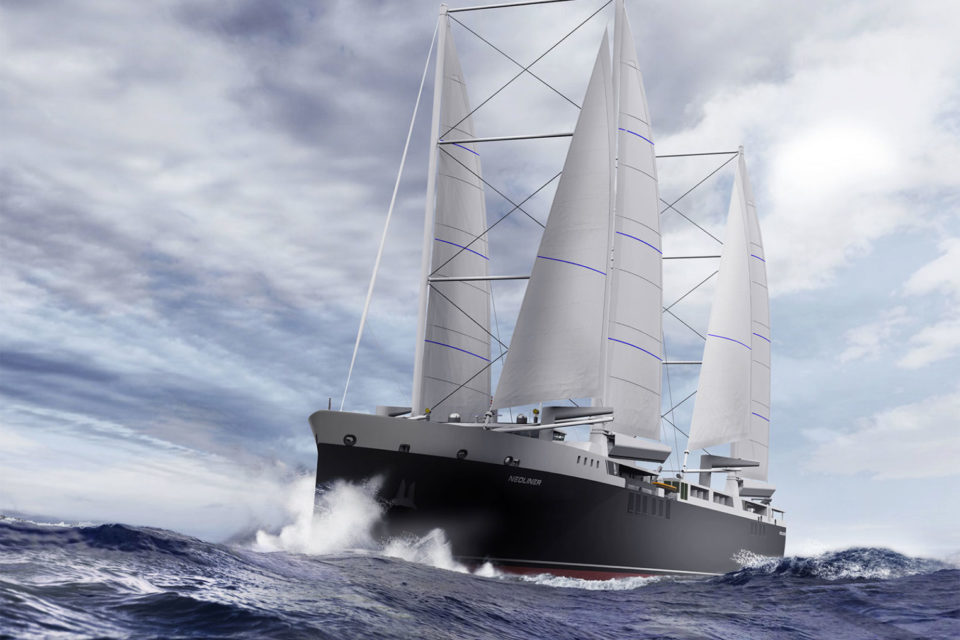 The two Neoliners to be built are 136 m long and 24,2 m wide and can transport up to 500 cars at a commercial speed of 11 knots, driven by the wind /Neoline

A four-masted modern roll-on/roll-off sailing ship of 136 metres long, 24,2 m wide with and 4.200 square metres under full sail, carrying 500 cars or 280 TEU (20 foot) containers on board to connect the French coast with North America in 13 days. That’s how French start-up, Neoline, sees the rebirth of centuries-old cargo under sail from 2021 on. One of the first clients aboard is Renault.

The name refers to a ‘new transatlantic cargo line’ between Nantes (France), Bilbao (Spain) and Charleston and Baltimore on the American East Coast, with a stopover at the French oversees community of the St-Pierre and Miquelon island group in front of the Newfoundland Canadian coast.

Two sister ships would ensure the regular service two times a month and will be profitable and able to compete with regular cargo ships that cover a comparable distance in eight days on average, burning tons of polluting heavy fuel.

The ‘Neoliners’ would do that mostly on sail, at a commercial speed of 11 knots, saving 90% of fuel on the way and at a competitive cost in ‘transit time’ for the client. The group behind former captain, Michel Péry, has calculated this in a five-year simulation, taking into account general weather conditions on that route.

Renault to step aboard

The feasibility study included the search for eligible cargo clients and in November the Nantes’ start-up could announce its first big name: French Renault. The car maker wants to ship a few hundred utility vehicles a year to St-Pierre and Miquelon this way.

Not the most impressive volume, but it is a start. Meanwhile, the group says to focus on a niche market that doesn’t exist today, and claims having a list of candidates that makes the business plan realistic enough to get started.

Michel Péry knows what he’s talking about. He has a 40-year sailing career behind him, of which he was a captain for 26 years, commanding several commercial roll-on/roll-off ships, the so-called ‘roro’ ships, but also the French historical three-masted bark, Belem, dating from 1896 and currently managed by the Compagnie Maritime Nantaise.

Today maritime cargo transport is responsible for 7% of the world’s oil consumption and 19% of CO2 emissions, almost as much as road transport and compared to 2% of global man-made CO2 emissions for aviation.

The team with several nautical experts has designed the new ‘Neoliners’ with existing modern sailing technology in mind, using four 67 m high masts (that can be lowered to 41 m)  and triangular sails instead of the historic square rigging, enabling the ship to sail at a sharp angle with the wind, like modern sailing boats.

It has a 4.000 kW auxiliary diesel-electric engine too, the same concept already used in modern sailing cruise ships. This ship, with an estimated price tag of 35 million euro, is intended to be sailed by a crew of 14 people and to transport cargo of all kinds on two decks.

Those can be accommodated to safely store extra-ordinary sized machinery or goods up to 9,8 m high and 200 tons if necessary, without the need of lifting, as it can be ‘rolled’ on board through the huge stern doors. 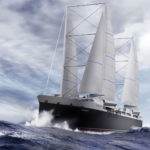