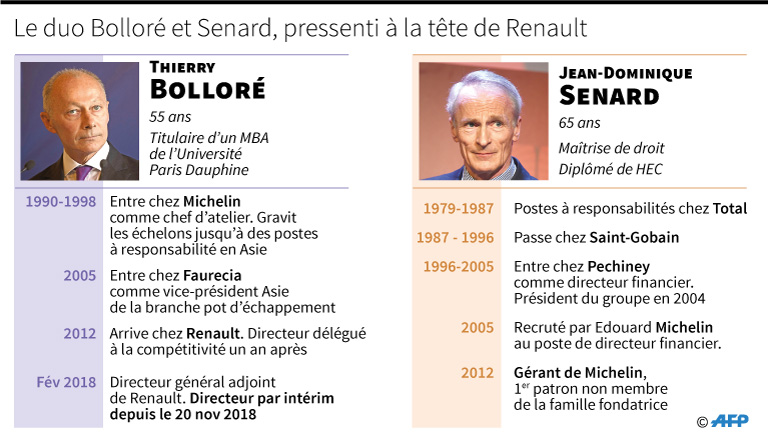 Finally the Renault board has decided to turn the Ghosn page. In a board meeting on Thursday, Jean-Dominique Senard (actual Michelin president) will be appointed president and his CEO will be Thierry Bolloré, the former COO and already replacing Ghosn temporarily.

Carlos Ghosn is still in jail in Japan and not ready to be released. It was time for the Renault board to act and the French government (largest single shareholder with 15,01% and 22% of the voting shares) has insisted on this.

It is expected that Ghosn will leave the presidency today by way of his lawyers. The financial conditions will be decided later as this is a very delicate question right now. Ghosn’s voluntary leave would be an elegant manner to solve the growing succession problem.

The new tandem at the head of Renault will have things to do. Jean-Dominique Senard, who stays president at Michelin until the end of his mandate at the end of May, has the heaviest task: restore the good relations with the shaken Nissan company and its Japanese leaders.

In the end Renault will have closed the Ghosn era quicker than Nissan, which still hasn’t designed a successor for Ghosn as president of the board. The demise of Ghosn will surely accelerate things, but the influence of Renault (43,4% shareholder within Nissan) will surely be felt.

For sure, the Alliance has to be saved and reinforced. Ghosn was planning a fusion between Nissan and Renault in the longer run and now everything has to be reconsidered and rebuilt. At Nissan they’re not adverse to this, but the Japanese wait what the constellation will be in the post-Ghosn era.

Mr. Ghosn didn’t like to be countered and has made a board of people who gave him full power. His successor will have to change this, with the help of the new CEO, Thierry Bolloré, new CEO at Renault, and Hirotu Saikawo, Nissan’s CEO. Question mark: who will be the new president at Nissan and of the Alliance?

The Ghosn affair has occurred at the wrong time. The car industry is in turmoil and companies need strong leaders to face the future. Bolloré will have to fall back on Ghosn’s ‘Plan stratégique 2022’ (70 billion euro turnover, 7% operational margin, 4 billion euro cost savings) to steer Renault into calmer waters. Fortunately the results are not so bad at the moment but all challenges are still there.

“The biggest challenge for Renault”, says a consultant, “is the energy transition. The WLTP changes already caused some problems, Renault will probably have to pay fines for not complying to the CO2 targets, it will have to focus even more on its electric advantage being already a long time on the market.”

Undoubtedly Ghosn has missed an exit with honour, but in fact his company lead has been very positive overall. The notorious cost cutter saved Nissan in 1999 and came to Renault in 2005, keeping the presidency of Nissan, maybe his first mistake.

Under his reign Renault has sold 48% more cars and turnover has grown with 42%, the operational margin doubling to 6,6%. Ghosn has also transformed Renault from a French manufacturer depending on one or two models, into a global player with a very good performing low-cost arm and sales all over the world, also in China.

The second challenge was electrification and the Alliance is still a leading company in the energetic transition to electrification. It has cost a lot of money but now that electric cars are on the verge of success, Renault/Nissan is in a good position to surf the wave.

Finally he has succeeded to conclude several agreements with the unions in his French factories, reviving them, reinvesting in them but making them also competitive again with the aid of the workers who were ready to save costs, also in their salaries.

For many Jean-Dominique Senard is the complete opposite of Ghosn. He’s a listener and always polite, says almost everyone. He also has the reputation of being socially concerned and of irreproachable ethic conduct.

In the beginning of last year he published a report for the French government on the social role of an enterprise in the 21st century. He made it together with Nicole Nottat, former secretary-general of the big CFDT union, and it was much praised by all, also by the new president Emmanuel Macron who shares his vision.

Senard will have his 66th birthday on the 7th of March and has prepared his succession at Michelin. He will assist Florent Menegaux to the Michelin presidency until he leaves the tyre manufacturer in May.

He knows the car sector very well, has even been named at a certain moment as the new president of PSA Group, the arch-rival, and leaves Michelin as a healthy company after a 14 year reign. He has had to make some tough decisions but has taken them in full commitment with all stakeholders.

This son of a diplomat has studied law and economics/administration and started his career at Total in 1979 going to glass specialist Saint Gobain in 1987. His passage at Pechiney (the aluminum giant) prepared him for the top.

eing taken over by Canadian Alcan has had a great influence because he had to made some unpopular decisions. This experience will hopefully help him to lead a car manufacturer in an era of great turmoil. 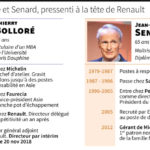