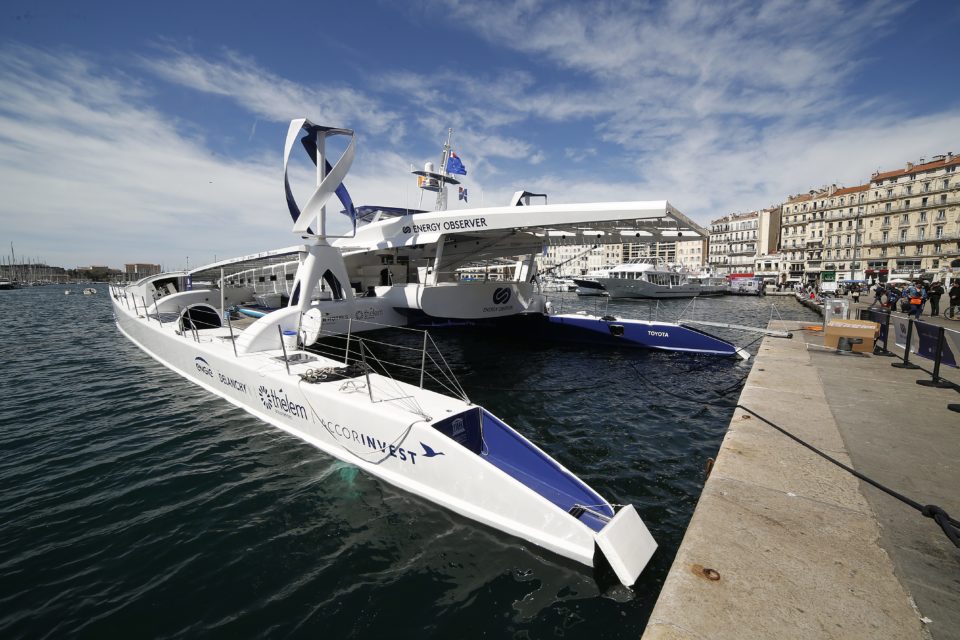 The former racing catamaran, Energy Observer, can produce its own hydrogen from seawater with its solar panels and wind turbines on board /Maxppp

French self-supporting hydrogen catamaran, Energy Observer, on a circumnavigation for six years docks at Antwerp on March 21st to show the next step in sustainable transport. The Antwerp Port uses the occasion to set up an exhibition called ‘Watt’s Next’, part of the ‘energy festival ‘EnergieFest’.

In April 2017 the former race-boat, Energy Observer, was launched at Saint Malo (France) to start a world circumnavigation without any CO2 production, using the wind, the sun and self-produced hydrogen.

The Energy Observer was inspired by the Solar Impuls airplane that circumnavigated the world on solar energy only. It is going around the world during a six-year mission to promote clean energy solutions, making a stop in 101 ports in 50 countries, among which Antwerp, between 21 and 29 March 2019.

The former (sailing) racing catamaran is 30,5 metres long and 12,80 metres wide. It has 130 square metres of solar panels on deck, two vertical helix wind mills and a wind traction parachute that drives two electrical engines that can be reversed to hydrogen generators.

The hydrogen is produced out of seawater after desalinating it and stored in a 62 kg hydrogen container for long-term use. A fuel cell can convert the hydrogen back into electricity when needed. A Li-Ion battery pack (400 Volts) can store the solar energy for short-term use.

The Energy Observer can reach a top speed of 10 knots (18,5 km/h) and has a crew of eight on board. Apart from the initial purchasing price of 500.000 euro for the former racing boat, total costs amount to 5 million euro.

The French boat will share the quay with the Hydroville from the CMB shipping company. It was in November 2017 the first ship on hydrogen homologated for passenger transport and is used for staff of CMB commuting over the river Scheldt since.

The Hydroville (costing 1 million euro and built in the UK) is testing the use of hydrogen as an alternative fuel to be burnt in big maritime diesel engines. First in auxiliary motors, later in the main engines.

Both ships will be moored in the shadow of the Port Building, where the Watt’s Next exhibition is to be held on 23 and 24 March between 10 and 18 h, on how the Antwerp Port is using green energy. 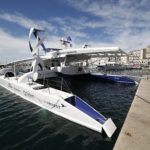