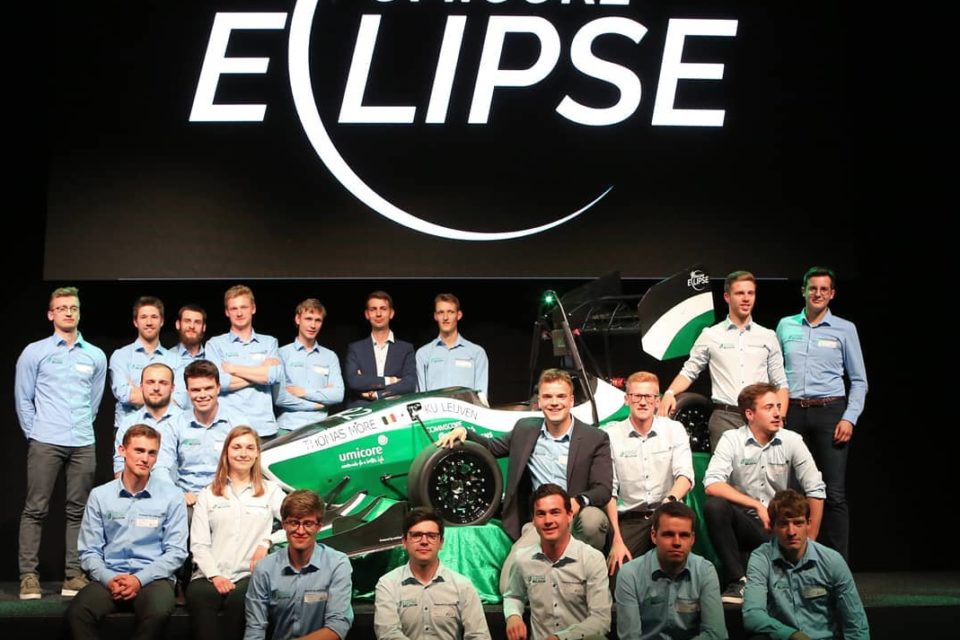 The Umicore Eclipse, an electric racecar built by KU Leuven and Thomas More College students, debuts in the Formula Student championship today. Formula Electric Belgium, as the team is called, will compete against other student teams. The first race takes place in The Netherlands, followed by rounds in Italy, the Czech Republic, and Germany.

The Umicore Eclipse goes from 0 to 100 kilometers an hour in 2,6 seconds, weighs 200 kilos and is worth about 500.000 euros. Belgian newspaper De Tijd followed the construction of the car.

Wednesday, May 8th. At the lab of engineering company Absolem, Members of the Formula Electric Belgium student team are welding the battery of the Umicore Eclipse. A crucial phase.

Lorenz Van Damme (26) and Yentl Frickx (22) are part of the team of 21 post-graduate students in the team. They started designing the car in September to compete against 250 foreign teams in different competitions.

“We designed the more than 4.000 parts of the Umicore Eclipse ourselves, from chassis to battery pack,” says Frickx. “Today, we are laser-welding the copper plates to the conductive print plates to link the battery cells to the electronics.”

Although D-Day, the presentation at Autoworld on May 28th is nearing, they are having fun. The battery weighs 50 kilos and has a tension of 600 Volts. The team turned to Absolem because they don’t want to use bolts to make the battery. This adds weight and the bolts can come loose during the race.

“As a company, we also learn a lot from this cooperation,” says Jurgen Adriaensen, responsible for process development at Absolem. “The students have a very innovative design and we don’t often come across this type of folly.”

Absolem works for customers in the medical, food and automotive industry for ‘laser challenges’, as Adriaensen describes it. Developing machines, products or samples.

Absolem isn’t the only company the students turn to. The black hoodies the guys are wearing are riddled with company logos. Usually, they support us by providing free space and technology. We often get the chance to work with their specialists. A valuable experience.”

The two team members can’t stop talking about the attraction of Formula Electric Belgium. “We enrolled in practical education, but during our studies, we only get to do small lab tests,” says Frickx. “Building this car, we are involved from the beginning to completion, we learn to work as a team, and we have to do everything ourselves, from marketing to finding companies.

Like in an SME, the students split up into specialized teams. One team is responsible for lightweight materials, other teams focus on electronics or the chassis.

“It is hard work,” says Frickx, head of electronics. “In reality, it comes down to an extra week of work on top of our activities as a student. But the advantage is that you see progress every week. Fantastic!”

Wednesday, May 28th. There is a long line outside the Brussels car museum, Autoworld, for the presentation of the Umicore Eclipse. Hundreds of sponsors, friends and family members.

“It’s wonderful that the students have organized this themselves,” says Kurt Vandeputte. He is responsible for battery materials at technology group Umicore, which has been the team’s main sponsor for years and also has experience in Formula E. “We keep our distance because the students do everything themselves. But we guide them during the process. They ask practical questions. About the type of batteries they best use, but also about the business plan they have to present to a jury.

On stage, in front of a packed room, different groups of the team present their work in panel discussions. “For a B2B company, like Umicore, this is an excellent chance to be more visible to a broader audience,” says Vandeputte. “And, of course, it is also a talent pool. At our division in Hoboken, we already employ students from previous editions.”

Umicore has seen the quality of the teams and the cars they build improve dramatically. Not a coincidence, according to Vandeputte: “The ecosystem of partner companies continues to expand. Moreover, the students pick the team that builds the next car themselves, so the knowledge transfer is assured.”

More than 130 partner companies support the team. The engine’s cooling system is built using Diabatix’s ‘virtual engineer’. This company developed an intelligent algorithm to design the optimum cooling system for electric cars but also smartphones and computers. “We like to work with the students because we get to test experimental cooling designs in real-time,” says Christopher Nicastro from Diabatix.

For the Monocoque, the carbon fiber structure of the car, Formula Electric Belgium works with aerospace supplier Sonaca in Gosselies. “The integral chassis is made using the same technology as the chassis of a Formula 1 car,” Says Kurt Withouck, who works with the students at Sonaca. “The material used is ideal because it is light and very rigid. We can also help the students by negotiating with our supplier.”

The students are creative in their search to cut costs. “We bought our battery cells from the Chinese manufacturer Melasta, which actively searches for students to work with,” says Frickx. “We tested the cells at the specialized firm Pec to push them to their limit. By sharing the results with Melasta, we obtained a discount on our purchase. That was important because the batteries represent a big cost.”

On Monday, July 8th, the day has finally come to race the car after 10 months of development. At the race in The Netherlands, the students will compete in sprint and endurance races, but also present their business plan and design choices to a professional jury.

The Belgian students dream of podium places this year. Last year’s car, the Umicore Pulse, was crowned the most innovative in the Czech Republic. “This year, the focus is on data gathering,” says Van Damme. “There are more than 200 sensors in the car. Some keep an eye on cooling, others the tension of the batteries. All that data can be used after the race to perform even better next time. They will also allow next year’s team to develop an improved version of the Eclipse.”

Team Formula Electric Belgium 2020 should already start to focus because next year they want to enter the competition for autonomous racecars. 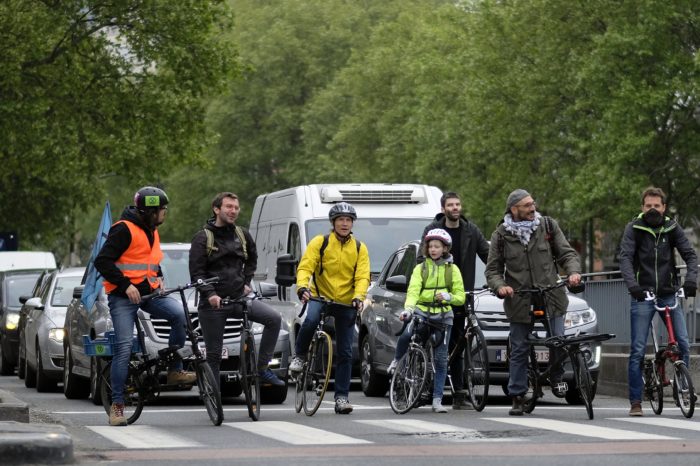 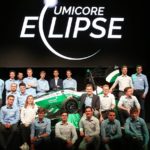