Geely-owned English car manufacturer Lotus has launched a new hypercar, the Evija. It’s electric, has 2.000 horsepower and will cost 1,9 million euros. The plan is to make 130 units.

The Lotus has a mid-mounted battery-pack of 70 kWh, providing a 400 km range (WLTP). Charging time can be reduced to 9 minutes if you can find a charger that supports 800 kW. The whole electric layout has been developed by technical partner Williams Advanced Engineering.

Lotus has always been renowned for its lightweight cars. Not so easy when you’re going into full electric. Nevertheless, the car only ways 1.680 kg, battery-pack included, aided by a monocoque carbon fiber structure only weighing 129 kg.

The chassis has adaptive damping; the wheels are made of magnesium and house carbon brakes. The most dramatic element of the exterior design is caused by the Venturi tunnels which pierce the rear quarters. The objective is, of course, to optimize airflow to the maximum. The interior of those tunnels is LED-lighted to create a fighter jet effect. There are no rearview mirrors; there are three cameras instead.

Evija has a motorsport-inspired interior that is also fairly luxurious. It’s a two-seater, the battery-pack laying behind those front seats in the center of the car. The Lotus Evija is the first production road car in the world to feature laser lights for both main and dipped beams.

Lotus will offer Evija customers a very high level of personalization, enabling them to specify the car exactly as they wish. This will include the opportunity to select unique paint finishes, interior trims, and detailing. 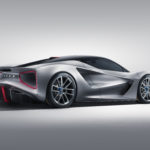