Belgian bus builder, Van Hool, produces 1.800 buses and coaches and 3.000 industrial vehicles annually, of which 80% is destined for export. The Belgian plant is situated in Koningshooikt (Lier, Belgium) /Van Hool

According to the Dutch media, the buses will be used for a link between Groningen en Drenthe. Part of the production will happen in the Van Hool plant in Macedonia, where more buses are produced than in the Belgian plant.

The hydrogen-electric buses will have a 350 to 400-kilometer range and will be used for interregional connections, like the one between Groningen and Drenthe. During the ride, hydrogen will be transformed into electricity to drive the buses. The only substance they will emit is water vapor.

The cost of this technology is still high, but the project is supported by several governments, like the provinces and Europe, among others. “Van Hool started to build hydrogen buses in 2005, and since then, 131 units have been made,” says Filip Van Hool, CEO of Van Hool.

According to the Flemish newspaper, De Tijd, the contract has a value of 13 million euros, 650.000 euros per bus. The chassis, bodywork and the interior will come from Macedonia, while the Belgian plant in Koningshooikt will take care of the fuel cell and the cabling. The buses should be ready for use by the end of 2020. 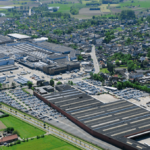