Antwerp police wants to be able to eliminate drones

Not only the police force from several Belgian police zones, but also customs officers are frequently using drones to gather information or take aerial photos /Belga

The Antwerp police are the initiator of Skyfall, a European project to eliminate dangerous drones. The police will buy special devices that can take control of the drones and even capture them in a net. Skyfall is a cooperation between the Antwerp police, the federal police, the police zone Brussels-Capital-Elsene, and the Romanian police, Jandarmeria Romana.

Drones are becoming more and more popular in the air. Since March 2018, there have been more than 16.000 commercial drone flights above Belgium. In Antwerp, Helicus, a company specialized in unmanned biological transport, wants to develop a fixed drone connection above Antwerp to transport tissue, samples, blood, and medicines between 21 different hospitals.

At the same time, the Antwerp police are analyzing the use of drones to take aerial pictures of accidents.

The more drones used, the larger the risk for accidents in the air. Also, terrorist organizations seem to be familiar with the use of drones. Some types can even be equipped with explosives, and the Antwerp Major, Bart De Wever (N-VA), wants to be prepared. “The use of drones for criminal or terroristic attacks is no longer hypothetical,” he says. “Just look at what recently happened in Saudi Arabia.”

With the presence of the port of Antwerp, the petrochemical cluster, and several so-called Seveso companies, it would not be a good idea to await the first incident with a drone, the Major says. Moreover, the police will get more and more calls from citizens making complaints against drones invading their privacy. So, with those devices, the police can eliminate pilotless machines.

The Antwerp police will buy the devices, work out a training schedule, and acquire hands-on experience. This experience will be shared with the other partners of the project. The entire budget for the Skyfall project is more than 1 million euros, of which 90% will be financed by Europe. 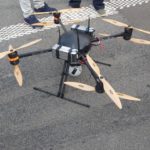 Antwerp police wants to be able to eliminate drones