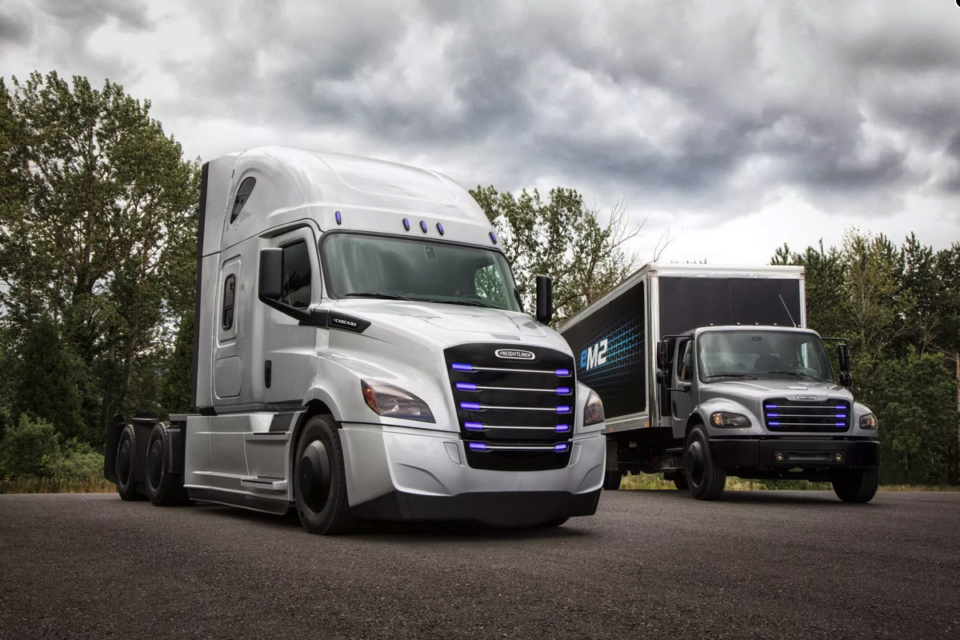 In the US, Daimler already delivered the first eCascadia full electric Freightliner semi-trucks to key customers for testing, beating Tesla’s Semi in speed to the market /Daimler

While electric cars and buses are showing up in the streets more regularly, it is still waiting for the electric semi-truck in the transport sector. Only in 2028, this type of semi-truck will become cheaper than diesel, two sector economists of the Dutch ING bank write in a new report.

Their report was presented on Wednesday in Rotterdam at the gathering of the transport sector. Rico Luman and Michiel Bode calculated the total cost of ownership per kilometer driven. In this scenario, the authors assume the semi-trucks to drive 60.000 km per year, and prices of these e-trucks to drop from 300.000 euros now to 150.000, while the range goes up from 200 km to 300 km.

“The revenue model for a semi-truck is quite complicated,” Machiel Bode tells newspaper FD, “The wage bill is the highest expense. This represents 50% of the total. You have to keep the truck running as much as possible to cover the expenses. Taking your time to recharge, as the owners of a private electric car can, isn’t possible with the low margins in the transport sector.”

The Dutch bank expects the production of electric semi-trucks to take off from 2021 on, but the real acceleration will be seen after 2025. “Legislation will be the driving force in the Netherlands,” Rico Luman says. He points at the fact that thirty to forty Duch cities will require trucks to be zero-emission to enter.

Pioneering in the Netherlands

“But even then semi diesel tractors will still be allowed if they are younger than eight years, five years for box trucks,” says Jeroen Baartmans from Dutch transport company Breytner. He expects a peak in sales of diesel trucks at the end of 2024, which will postpone the turning point to electric until 2030.

Breytner is pioneering in the Netherlands with electric transport. He and his sister, who are running the company, believe in the energy transition. “Yes, first expenses are higher,” Baartmans says, “but these expenses don’t outweigh the social benefits. The Paris agreement wasn’t setting goals for CO2 reduction without reason, and the transport sector has to do its share.”

The company has four electric trucks in service in the Rotterdam area, two MAN and two Mercedes that were adapted to electric. Meanwhile, they did some 250.000 km altogether. Jeroen Baartmans made that a business case on its own by testing trucks and software for e-truck manufacturers.

He also has a business case by delivering transport services for retail chains that want to be a forerunner with a greener image. But in this, he is working together too with a ‘classic’ transport company, Vlot Logistics.

In the Netherlands, a model country in private electric vehicles, only 135 electric trucks were registered at the beginning of these years. But for big electric semi-trucks, it’s still waiting for the manufacturers to start delivering.

Meanwhile, German car and truck builder, Daimler, is beating Tesla in the race by officially delivering in August the first of its Freightliner branded eCascadia semi-trucks to US customers in Southern California for testing.

Tesla has promised it will deliver ‘soon’ but has been using its prototype Semi itself only to transport Tesla cars or parts, so far. Daimler says the electric box truck and semi will go into production from 2021 on.

Meanwhile, hydrogen truck builder, Nikola, claimed a few months ago to have about 14 billion dollars of commitments from customers for its Nikola One with a 1.200 mile (1.900 km) range. Among them Anheuser-Bush, the American daughter of the world’s biggest brewer, AB InBev, headquartered in Belgium.

They placed an order for 800 Nikola trucks last year. It also ordered 40 battery-powered semi-trucks with Tesla. The latter Tesla promised to start delivering in 2019. 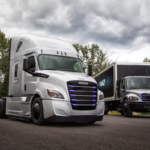