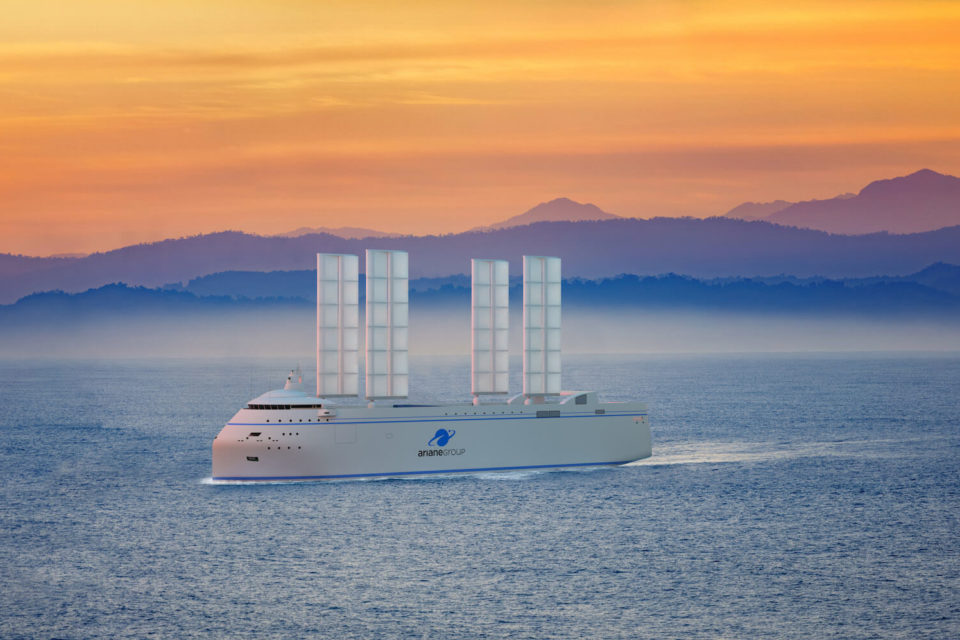 The 121 m-long carrier, Canopée, is designed to be partially propelled by four wing-sails of 363 square meters reducing harmful emissions of the ships engines by 35% /Alizée

ArianeGroup, joint-venture between European aerospace companies, Airbus and Safrane, has chosen to transport its new Ariane 6 rocket in parts to its launching platform at the Guyana Space Center in Kourou, by sailing ship. ‘Alizés’ – meaning ‘Trade Winds’ in French – is to do the job with its yet to build 121 m-long hybrid motor sailing vessel ‘Canopée’ by 2022.

Alizée is an ad-hoc joint-venture between French Zéphyr & Borée and Jifmar offshore services. The first – named after the Greek gods of west and north winds –, was created in 2014 by former merchant marine officers to develop an alternative to modern freight shipping by sailing ships. Jifmar is specialized in supporting vessels.

Canopée was designed to the though specifications required by ArianeGroup to pick up the parts for its state-of-the-art Ariane 6 rocket in Bremen (Germany), Rotterdam (Netherlands) and the French harbors of Le Havre and Bordeaux and sail it to the port of Pariacabo in French Guyana (South America). In Kourou, the rocket will be assembled and made operational.

Canopée or ‘canopy’ in English – is 121 meters long and 23 meters wide. It has the ‘castle’ – the captain’s bridge – in the front and has an open deck and stern to be able to handle the huge rocket parts.

On its starboard and port, it has in total four 30 meter masts carrying articulated wing-sails of 363 square meters each, so-called ‘OceanWings’. The latter are designed by naval architects, Marc Van Peteghem and Vincent Lauriot Prévost, of VPLP design. The fruit of a project that started in 2010 with the BMW Oracle trimaran that won the America’s Cup that year with a fixed-wing.

Van Peteghem estimates that with these wing-sails, the ship can reduce polluting emissions by 35% and reduce CO2 emissions with 7.200 tons per year. The ship still has marine combustion engines too, that run on marine diesel oil (MDO) or LNG (Liquid Natural Gas). Cruising speed is around 16 knots (54,8 km/h). 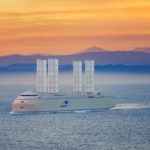