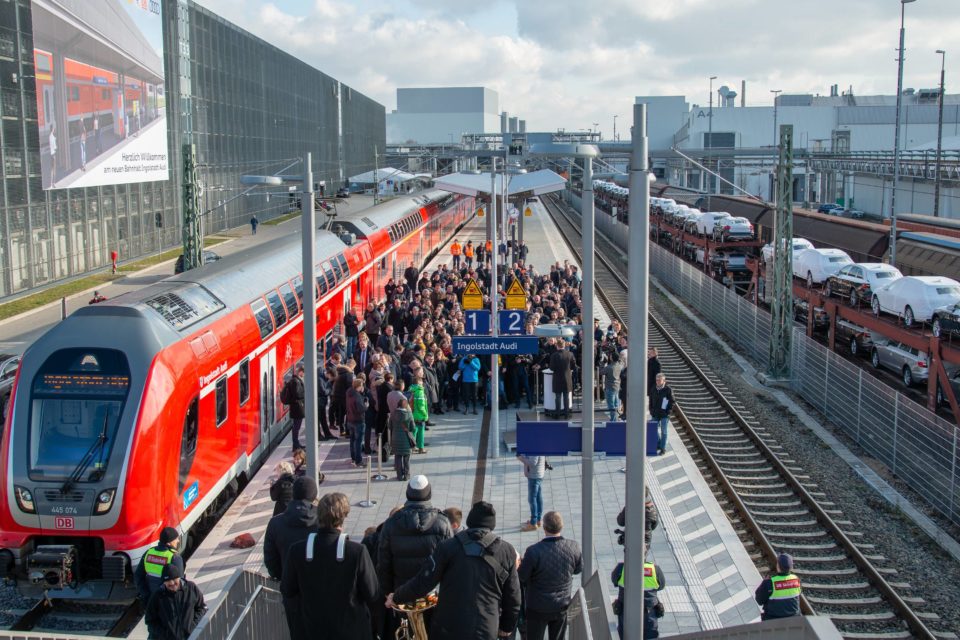 German rail, Deutsche Bahn, inaugurated on Monday the brand new ‘Ingolstadt Audi’ station at the giant factory of the carmaker, who co-financed the station itself /Audi

German carmaker Audi tries to lure part of its 44.000 employees at the main factory in Ingolstadt out of their car and on to the train with its ‘own’ train station. The 15,4 million euros for ‘Ingolstadt Audi Bahnhof’ that was inaugurated on Monday, is co-financed by Deutsche Bahn (DB), the Free State Bavaria, the city and Audi itself.

It’s not unusual that car factories have a train station nearby – like the Forest train station at the Audi factory in Brussels, for instance – but a purpose-built railway station that is paid for partially by the car manufacturer itself is not so common. How much Audi’s share in the financing is, was not communicated though.

From the station, Audi employees can take one of the twenty VW Caravel shuttles or fifteen MAN buses (from parent company Volkswagen) the boss provides to bring them to their working place on the 2,76 square km factory terrain. At the Audi headquarters in Ingolstadt, there are some 1.700 company-bicycles at the disposal of the staff too.

Whether Audi will be able to seduce their employees to get out the car most of them ‘are in love with’, remains an open question. “But when you’re stuck in traffic jams during rush hours on a daily base, that ‘love’ has its limits,” was heard at the inauguration.

Half of the ticket paid back

Audi pays up to 50% of the train and bus tickets of its employees with a maximum of 300 euros per year to help them cross the line. So far some 3.000 employees made use of the offer to have their public transport subsidized. Initially Audi and DB count on 1.500 train travelers a day for the station.

The station is brand new and features two platforms, enabling some 3.000 movements daily (getting on and off the train). It sits directly on the line München – Nürnberg, over Ingolstadt and Treuchtlingen and 40 regional trains from Deutsche Bahn will stop at the ‘Audi station’ daily.

Open to the general public

It becomes Ingolstadt’s third train station and will also be open to the general public from December 15th on, so citizens and visitors to Audi’s Forum and Museum can make use of it too.

Next to the ‘Ingolstadt Audi’ station, there is a brand new bus-station with eight bus connections, two taxi stands, and a bicycle parking. The infrastructure has a price tag of more than 6 million euros on top of the 9,2 million for the train station alone. 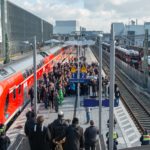