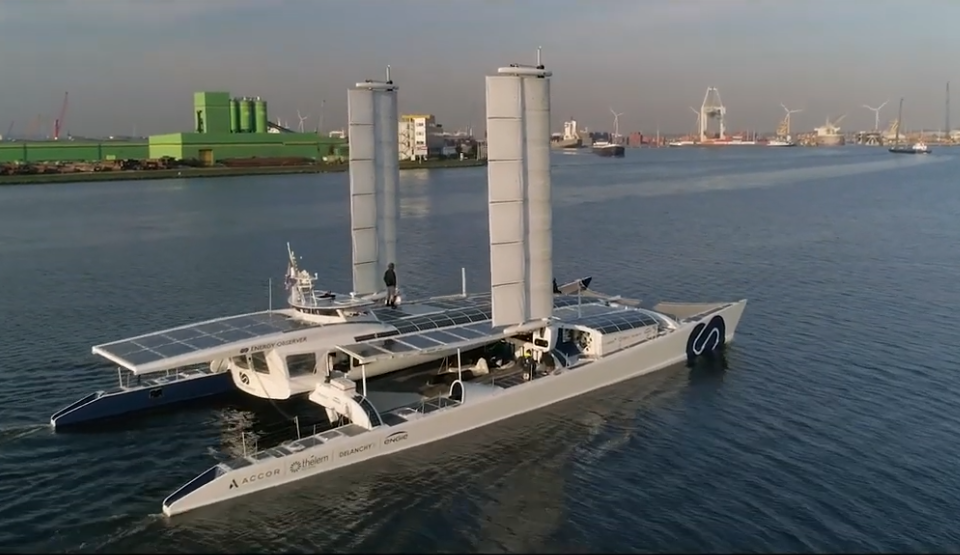 The ‘floating hydrogen and solar energy lab’ of French captain and sailor Victorien Erussard, the Energy Observer, is ready to start next week the second phase of its six-year round-the-world tour with zero emissions. The goal is to show the world the technologies that can make a difference in the battle to fight climate change.

Energy Observer is going to sail to Tokyo via the Galapagos Islands to start with, to be at the Olympic Games as part of the flame bearers. Hydrogen will be a major theme in the margin of this year’s Games.

The journey will bring them later to Australia, China, India, Africa – some 101 ports in 50 different countries in six years – to end in New York at the foot of the United Nations building in 2023. Last year in March, the Energy Observer visited Antwerp, among others.

The boat, a 30,5-meter former sail racing catamaran, produces its own energy by solar panels for its electric drive and stores the surplus energy as hydrogen, produced onboard from desalinated seawater. New is that it can actually do this while sailing. Before it had to be done at stopovers.

Propulsion is helped by newly developed ‘wind turbine thrusters’, a kind of rigid sails that can be reefed down, called ‘Oceanwings’. The latter are designed by French naval architect company VPLP Design.

Its founders, Marc Van Peteghem and Vincent Lauriot-Prévost designed several of the world’s most innovative racing boats. These ‘Oceanwings’ are the outcome of a project that started in 2010 with the BMW Oracle trimaran that won the America’s Cup with a fixed-wing. The fixed wing’s aerodynamic efficiency is superior to traditional sails.

The problem with fixed-wings is that they can’t be reefed down – reducing the sail’s surface area – when the wind becomes too strong. This is solved with the Oceanwings, using Hydranet, a resistant fabric that can be painted or varnished and allowing to fold down the wing-panels.

According to the designers, these Oceanwings could reduce CO2 emissions on traditional ships equipped with them by 46%. The concept will be used by ArianeGroup to transport the Ariane 6 rocket to its launch platform at the Guyana Space Center in Kourou.

The joint-venture between European aerospace companies, Airbus and Safrane, ordered a new transport ship-to be built by 2022, the 121 m-long hybrid motor sailing vessel Canopée. On its starboard and port, it will feature in total four 30-meter masts carrying Oceanwing-sails of 363 square meters each.

On the Energy Observer, the Oceanwings have a surface of 31,5 m². Each wing is self-supporting and can rotate by 360°. They will help to propel the boat with wind energy like a traditional sailing vessel, but make it possible for the first time to generate hydrogen while sailing. Before, this had to be done on stopovers.

While the boat is sailing on wind power, electricity can be produced for the electrolysis process to make hydrogen by reversing the electronic motors into hydro generators. The hydrogen is compressed at 350 bar (62 kg) and stored in carbon fiber tanks.

With a newly developed fuel cell (engineered by Toyota) it can be used to make electricity again. The total net energy stored is 1 MWh. The latter shows the advantage of hydrogen for energy storage over batteries, the Energy Observer team says. 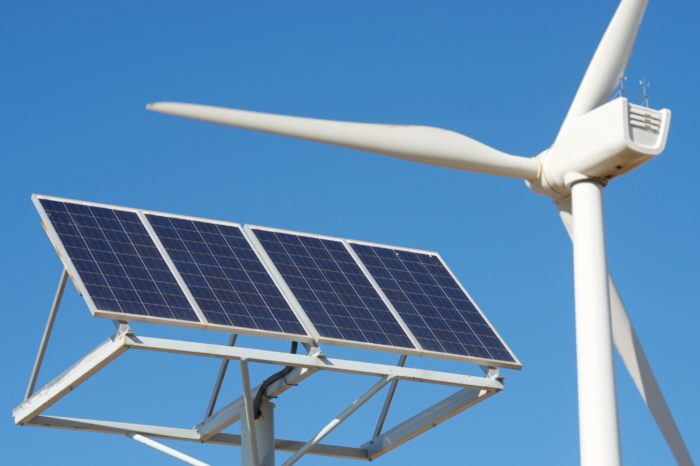 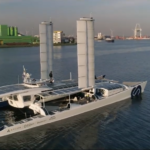