Picture showing several wind turbines in Ostend built by the ENECO consortium. Today, the Seamade project is the largest construction site in the country /Belga

In the harbor of Ostend, there is raging a race against the coronavirus. The builders are accelerating the construction works of Seamade, the largest wind energy farm in the Belgian North Sea. “A lack of supply would be a disaster.”

Today, Seamade is the largest construction site in our country that is still operational. The main goal is to have the offshore wind energy farm inaugurated by the end of this year. “It will be a challenge, but it’s not impossible either,” says project leader Mathias Verkest.

The question is whether all particular parts – wiring, turbines, and sails – will arrive in time despite the corona crisis. “The more severe the corona measures will become, the more complex it will be to keep the construction works on schedule.”

The project depends on deliveries from Spain, one of the countries that is hit hard by the crisis. All elements of the turbine towers are made in Spain. They are transported from the port of Bilbao to Ostend. Unfortunately, the shipping of the towers cannot be accelerated.

The management of the project is split up in two separate locations to reduce the risk for contamination, which would automatically lead to a standstill of the works. The social distancing measure is rigorously respected. That is also why the crew on the ships is halved.

The crew will stay longer on board to avoid that new a crew brings the virus on board. No contact is allowed between people onshore and offshore. They have to remain, work, and eat in separate containers.

Bringing over specialized staff from abroad is also taking some doing. “We had to charter a special flight to transport workers from the Greek electricity cable specialist, Hellenic Cables, to Ostend. Arranging a scheduled flight seemed to be extremely difficult.” 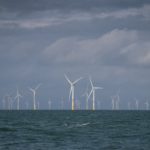