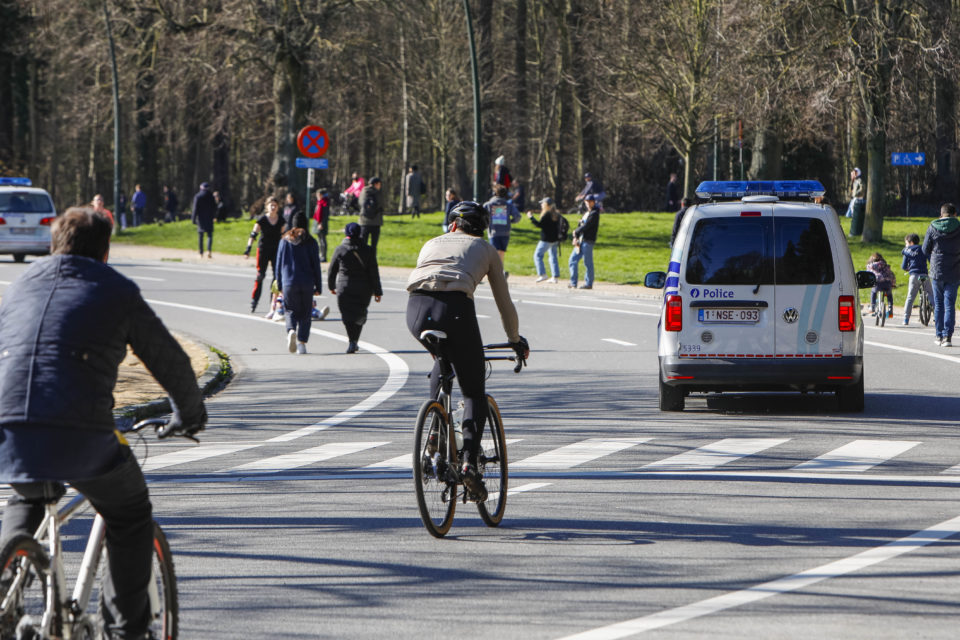 Brussels opens its parks and streets to pedestrians and cyclists but police are still making sure social distancing rules are respected. /Belga

All around the Brussels Region, municipalities are called to open up their streets and parks to pedestrians and cyclists to help social distancing. In the so-called ‘pentagon’, the inner city inside the ‘little ring road’, speed limits will be dropped to 20 km/h during the lockdown.

Pedestrians and cyclists get absolute priority over motorized traffic and can use the full width of the street. The measures will take effect from the end of April or the beginning of May, according to the newspaper Le Soir and local news site Bruzz on Monday evening.

The woods of La Cambre/Ter Kameren have been totally freed of cars, Ixelles/Elsene has reserved a shore of its ponds to pedestrians while Anderlecht transformed two kilometers of roads into a meeting area.

In the current lockdown situation due to the COVID-19 virus outbreak, Belgians are asked to stay at home and keep their distances. This might be easy in the countryside but in the smaller living areas of the capital city.

But boredom and the lack of fresh air could easily play on the citizens’ mental health. To make sure that those who decide to go out for a walk can respect social distancing measures, Brussels is ‘opening up’ its streets and parks.

From cars to cyclists

Brussels’ biggest fresh air bubble, the woods of La Cambre/Ter Kameren, sets the tone. It has been totally freed of cars and dedicates all its streets and paths to pedestrians and cyclists. However, police are closely monitoring the grounds for social distancing and excess speeds.

In the central ‘pentagon’ and in some other parts of the city, municipalities are creating slow streets, where the traffic speed is limited to 20 kph. Cyclists and runners already decide by themselves sometimes to use the full width of the street because traffic is very low and the pavement is often full of people queuing for the bakery or the butcher. The new measures will give them an absolute priority.

Brussels Mobility Minister, Elke Van den Brandt (Groen) is inciting all the 19 municipalities to make way for cyclists and pedestrians. To do so, the Minister is offering the help of her administration, opening regional reserves of urban furniture and other flower boxes or speed humps.

In Woluwe-Saint-Pierre, cars have been banned from the park while Ixelles has reserved a shore of its ponds to pedestrians and Anderlecht has transformed two kilometers of roads into a meeting area. 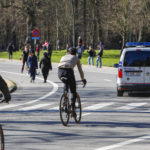