The sales drop due to the coronavirus crisis is best highlighted in Britain where sales have reduced by 89%, reaching low numbers not seen since 1952 /AFP

Since the beginning of the Covid-19 health crisis and the lockdown, car sales have drastically dropped all around the world. Compared to May last year, sales dropped by 49,5% in Germany, and 89% in Britain.

Even Russia recorded a 51,8% sales decrease. After a complete stop in April, production restarted in May, but numbers are more than halved of what they used to be.

There’s no doubt: the coronavirus health crisis will leave a dark spot in the automotive sector’s history. After the lockdown was enforced all around Europe and other parts of the world, car and parts production were brought to a halt to try and stop the virus from spreading.

Numbers were at an all-time low with -97% for Germany alone. As dealerships are reopening now, and production restarted about a month ago, sales numbers are increasing, but very slowly.

Europe’s two biggest markets for the automotive sector are only a fraction of what they used to be. In Germany, 168 148 new cars were registered in May, which is 49,5% less than at the same time last year. Worse: sales in Britain have dropped by 89%. Only 20 247 new cars were registered compared to 163 477 in May 2019. The UK hasn’t seen registration numbers this low since 1952.

In Germany, all brands have seen their sales drop, except Subaru. The government has decided to reintroduce a scrapping incentive, just as they did back in 2009 after the financial crisis. As part of a 130 billion euro restart plan, the VAT has also been dropped.

“The VAT drop and incentives for EVs are positive impulsions that will contribute to restarting part of the low demand for cars. But to remain competitive and combine climate protection and economic conditions, we need to keep an offer that also includes cars with modern internal combustion engines,” notes Hildegard Müller, president of the German Automotive Sector Federation (VAD).

“The situation on the market remains dramatically bad. And we now see that the reopening of dealerships in April had almost no positive effect,” explains Reinhard Zirpel, president of the Foreign Manufacturers Federation (VDIK). In the UK, dealership chain Lookers is planning 1 500 lay-offs out of a total of 8 100 employees and the closure of 12 sites.

This situation isn’t limited to Europe. In Russia, new car sales have dropped by 51,8% compared to May last year. “This is not a surprise because dealerships in Moscow, Saint-Petersburg, and most regional retailers stayed closed the whole month,” informed Thomas Staertzel, director of the AEB’s carmaker committee. 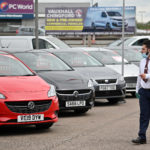