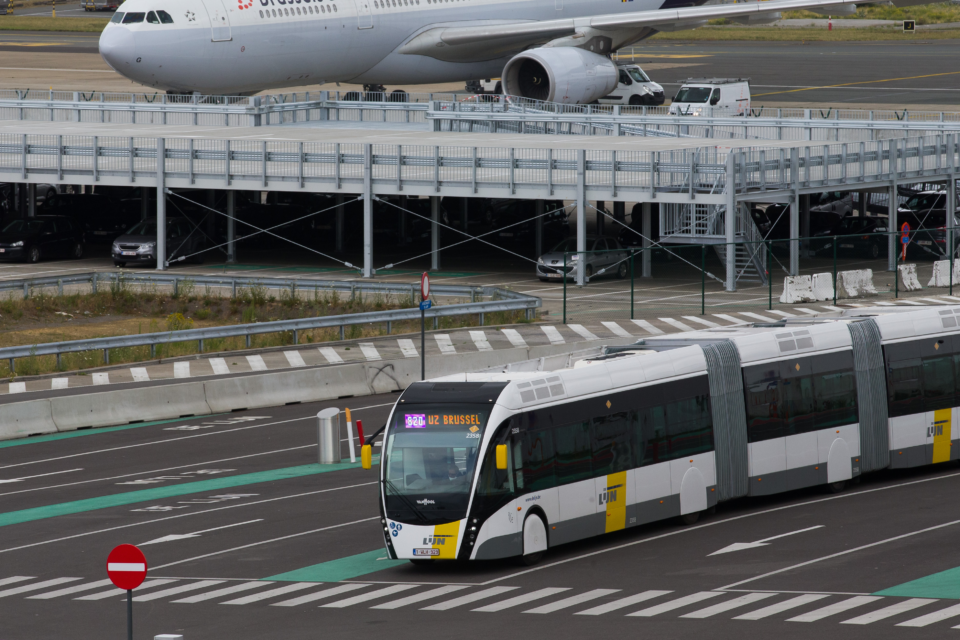 A ride of Line 820, a Tram-Bus hybrid on the Ring trajectory between Brussels Airport and the UZ Jette hospital /Belga

On Saturday, the Ring Tram-Bus was officially inaugurated at Brussels Airport. As of today, it provides the connection between the airport and the university hospital UZ Jette, via airfreight Brucargo, the center of Vilvoorde, and the Heysel.

The Ring Tram-Bus also fits in perfectly with the airport’s strategy of sustainable development. “We are not just an airport, we are an intermodal hub,” says Arnaud Feist, CEO of Brussels Airport Company, as reported by the press agency, Belga.

“Brussels Airport has one of the busiest bus stations in the country. There are more buses here than there are flight movements, and in addition to the thousands of air passengers, we also receive thousands of commuters who use public transport.”

With their hybrid engines, the 14 Ring Tram-Buses, which cost 12,2 million euros, are not only quieter, they also emit a lot less CO2, and are a lot more energy-efficient.

Each 24-meter-long Tram-Bus also offers space for 137 passengers. “This is a first for Flanders and Belgium, and it is no coincidence that this is happening in this region,” says Roger Kesteloot, director-general of De Lijn.

“Flemish Brabant faces a major mobility challenge, as it has two employment poles, Brussels and the airport, and it is also a transit area. The northern edge is already one of the most traffic-prone regions. To tackle this, we need a modal shift, which we want to make with the Brabantnet, of which the Ring Tram-Bus is the first realization.”

Producer Van Hool’s hybrids have been on the road since 2013. Although not in Belgium, but in Sweden, Ireland, Norway, Martinique, Metz, and Barcelona, among others.

“This time we made them for De Lijn,” says Jan Van Hool. “With versions on demand of them as a customer. The Tram-Buses are equipped with leather seats, roof lights, and colors to match De Lijn. On the outside, they are mainly recognizable by their modern design reminiscent of a tram and the two hinge points.”

The Ring Tram-Bus will run on line 820 and every half hour, from September even every quarter of an hour. On Saturdays and Sundays, this frequency will drop to every half hour and every hour respectively, but the bus runs on its own bedding, which should improve traffic flow and reliability.

A separate bus bedding with a total of 16 km will be provided along the 20 km route. The newspaper Het Laatste Nieuws writes that there is currently 4 km of bus bedding and that a lot of modification work has already been done.

In 2023 the whole route will be finished. Once all the bedding is done, the ride between the airport and UZ Jette will take about 40 minutes.

The Flemish government has invested some 60 million euros in the Ring Tram-Bus project.  The next steps are the Airport Tram connecting Brussels North with Brussels Airport and the Express Tram between Antwerp Willebroek and Brussels North.

According to Flemish Minister of Mobility, Lydia Peeters (Open Vld), negotiations with the Brussels-Capital Region are still ongoing.

The Brabantnet fits into the multimodal plan around the Brussels Ring Road and the Flemish periphery around Brussels, where, according to the Minister, 34 million euros are planned for bicycle investments in 2020 alone.

For example, safe cycle paths will be provided, which will, among other things, connect to the main stops of the Ring Tram-Bus. By the way, bicycles are allowed on the Tram-Bus. 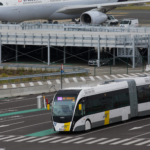