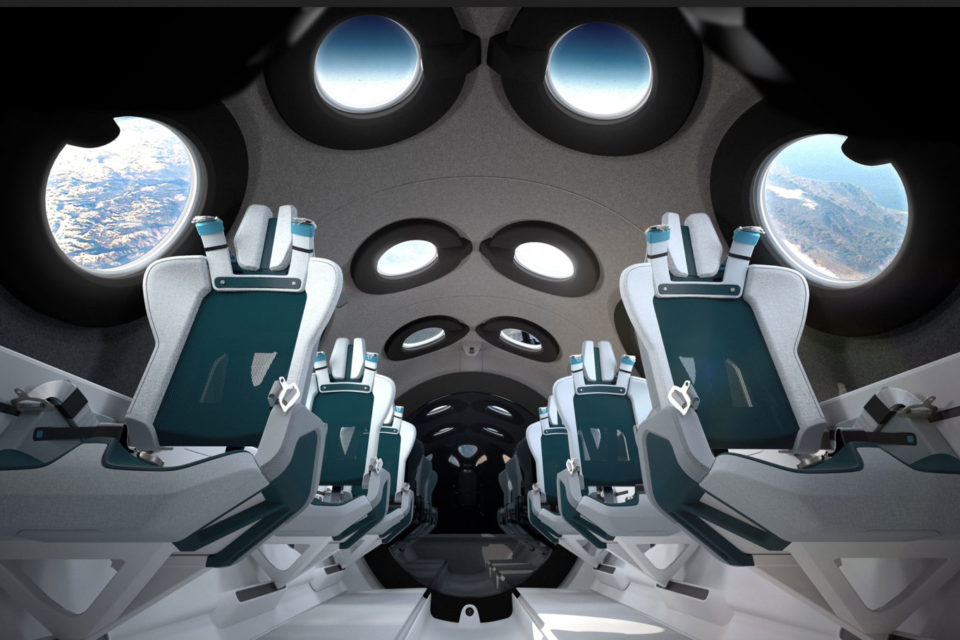 Sir Richard Branson’s ‘space tourist company’, Virgin Galactic, has unveiled the final design of the cabin interior for six private astronauts to experience traveling into earth’s orbit and six minutes of weightlessness. A ride of their life, they’re willing to pay $250 000 for each.

A specific take-off time frame for the first of 600 people that already paid a deposit of $1 000 to reserve their space-ticket isn’t set yet. So far, the company has only flown to space twice.

Before starting with the commercial flights from the Virgin Galactic base ‘Spaceport America’ in the Southwestern desert of New Mexico still, a number of test flights have to be done. Starting with five ‘test passengers’ and finally, Branson himself. But technical difficulties and corona have delayed everything so far.

The cabin of Virgin Galactic’s spaceplane VSS Unity was designed with the help of London-based design firm Seymourpowell entirely around the concept of giving future space tourists the optimum view on the planet. There are six of them seated all on ‘window seats’, one aside them and one in the ceiling above. In total, there are 17 windows, the three in front of the two pilots included.

The individually size-adjusted seats themselves are high-tech bucket seats made of high-grade aluminum and carbon fiber. They are covered in engineered foam, 3D knits, and technical fabrics. The latter is designed by the American sportswear company Under Amour, which also designed the blue spacesuits for the astronauts.

The seats seem to hover as they cantilever from the sidewalls, leaving ample space underneath and reinforcing the experience of the zero-gravity the occupants are to experience once in orbit. During takeoff and landing, they are securely strapped in with a five-point seat belt that can be released with one button on the circular buckle on the passenger’s chest. 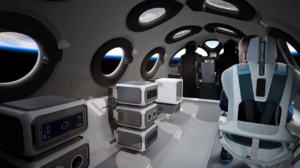 Like in an airplane, the seat configuration can be adapted and partially removed. To carry modules for scientific experiments in a zero-gravity environment, for instance. Yet another part of the Virgin Galactic’s business plan.

So how does it work? A specially designed carrier plane brings the spaceplane into the thinner atmosphere at 35 000 feet (10,6 km), where it is released, and the rocket engine in the back of the spacecraft is fired.

In six seconds, the VSS Unity passes through the sound barrier, and passengers undergo 3,5 times the normal gravity G-force while it climbs to a height of roughly 97 km above Earth’s surface.

“Outside the sky changes from blue to purple and finally to black, as you leave the Earth’s atmosphere,” Virgin Galactic promises in its leaflet. “As the rocket motor shuts down, your cabin is transformed from a 3,5G rocket ship into a unique, spacious zone for the exploration of weightlessness, and a silent viewing platform for the greatest show, off-Earth.”

In the six minutes, the passengers can enjoy weightlessness after unstrapping, the seats recline to give maximum moving space. The sidewalls are covered with soft materials, so you won’t hurt yourself being too enthusiastic. The side and ceiling windows have a black, soft circular frame that you can grab on while looking outside from your floating position.

In the frames, cameras are incorporated to make selfies for the passengers automatically. And in the back of the cabin, a large circular mirror lets them admire themselves floating around. Everything is designed for you not to bother to use your smartphone to take pictures, that’s done for you on the fly and delivered to you right after you touch down.

When starting to descend back to Earth, passengers are strapped in again, and seats are declined for maximum comfort while gravitational forces return. During that descend, “the rotated or feathered tail booms act as powerful airbrakes slowing and stabilizing the spaceship in readiness for the final glide to a runway landing at Spaceport America.”

In total, the space trip will have taken some 90 minutes to ‘burn’ your 250 000 dollars, but the experience includes a four-day stay at Spaceport America where you will be prepared for the ‘experience of your life’ as most would-be astronauts hope. 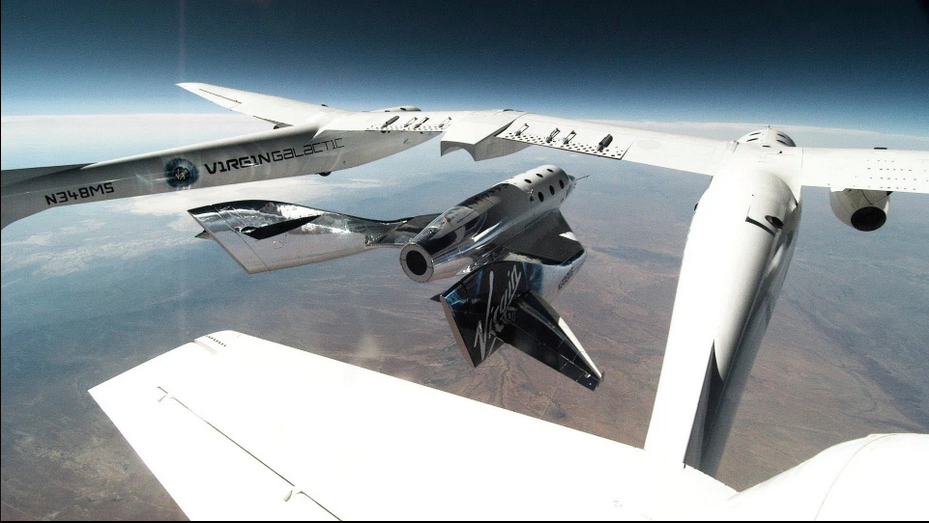 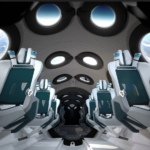