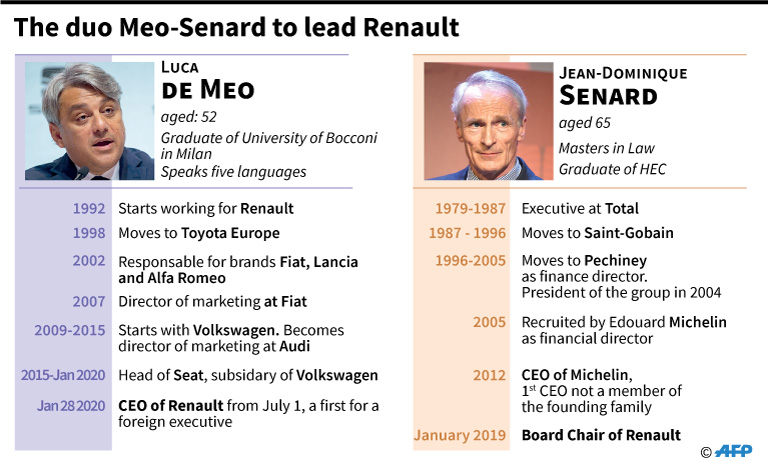 The careers of Jean-Dominique Senard and Luca de Meo, the duo that will lead the French automobile group Renault /AFP Infographics

In the first half of this year, the French car manufacturer Renault has suffered the highest net loss in its existence: €7,3 billion. The newly appointed CEO, Luca de Meo, consequently wants to change the business system: “We are going to transform the whole system from volume to value.”

The duo on which the company is counting to turn the bow is the above-mentioned Luca de Meo, who came over from the VW Group (Seat) very recently, and Jean-Dominique Senard, former boss of Michelin and asked by the French Minister of Economy, Bruno le Maire, to save Renault and the Alliance after the Ghosn affair.

A big part of the loss is also due to the fact that Renault is (for 43%) owner of Nissan, the Japanese number two car manufacturer that has also accumulated huge losses. This represents €4,8 billion of the total loss suffered.

But Renault was already in difficulties before the corona crisis, and Covid-19 has, of course, worsened everything. In the first six months of this year, Renault itself registered a turnover of €18,4 billion (-34,3%), with a negative operating margin of €-1,2 billion (compared to €+1,7 billion last year).

The Renault Group, representing the brands Renault, Dacia, Lada, Alpine, and Samsung Motors, suffers from overcapacity in its plants all over the world. When the market collapses, things become even worse.

“At the moment, we are in the lowest point of a negative curve that started years ago,” comments Luca de Meo, referring to the (overly optimistic?) plans of his predecessor Carlos Ghosn to produce 14 million vehicles per year with the Alliance.

“Now we have to invest in the growing segments of the market and those which are the most profitable,” de Meo adds. In his communication, de Meo points to positive elements for the future like the E-Tech hybrid technology and the top class new electric platform to be used throughout the Alliance (and just recently presented in the Nissan Ariya).

The new strategic plan for the Group will be announced in January next year and will spread over six to seven years. It will be at the same time cost-cutting and preparing the rebound. “The efforts we will do to lighten the company’s structure will also serve to nourish our future potential,” de Meo has added.

Looking into the future

The good news is that Renault still has some cash, also because one of its major shareholders is the French state (15,1%), and it has been granted a guaranteed loan of €5 billion. In the new strategy, every car has to generate much more cash per unit, thanks to a much better finish, repositioned brands, and much more attractive models.

To achieve this, Renault had already lured away Gilles de Borgne, chief of R&D at PSA, at the beginning of this year. In the first month of his new reign, CEO Luca de Meo has already struck twice, by hiring Peugeot’s design director Gilles Vidal and Seat’s design chief Alejandro Mesonero-Romanos to give the Renault products of the future an attractive appearance.

Renault finally wants to turn the page of the Ghosn debacle. “There’s a new wind in the company,” says President of the Board, Jean-Dominique Senard, “but we will have to do make huge efforts, and they will last for several years.”

“We have direct competitors who are doing very well regarding the circumstances,” (Senard is, of course, referring to PSA without naming them), “but they also needed several years to turn things around.”

Luca de Meo is not afraid to admit that his example will be PSA. “We would surely like to achieve their performance. The rivalry between us can lead us both further. But it will take some time, we will have to wait for 2022 or even 2023 before we will effectively see what we are deciding and planning now.”

Being at the same time president of the Alliance, Senard also referred to the changes and the new strategy that has been deployed recently. “The newly created Alliance committee is a lever for the future. Each member of the Alliance will play a leading role in a part of the world. For Renault, this will be Europe. We want to cultivate this new feeling of confidence between the partners further.” 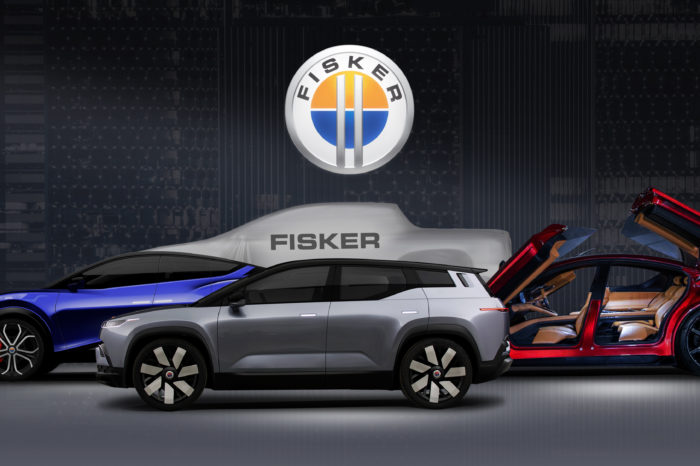 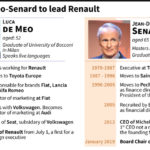