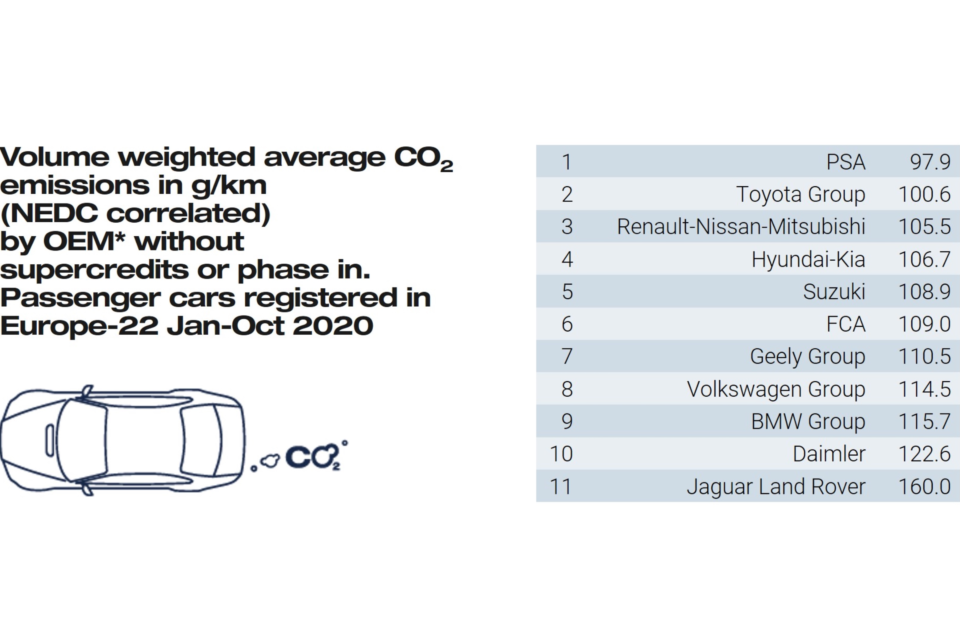 In the ranking for the first ten months of 2020, not taking the super credits and other calculations into account, PSA is first, followed by Toyota, Renault, and Hyundai /JATO

According to market analyst Jato, both the PSA Group and Renault Group will not be paying CO2 fines because of too high average emission results for 2020. Almost all other manufacturers are liable to fines. For some of them, they could be huge.

In 2019, Jato did a simulation of the future regulations and applied the general rule to the registrations of 2018 to see how much work some still had to do. The PSA Group was already leading then, but at an average of 114 g/km CO2 (the limit is 95 g/km), they would still have to pay a fine of €5,39 billion.

Another example, the VW Group still had to diminish by 26 g/km to avoid the fine (estimated at €9,2 billion). Simultaneously, manufacturers like Daimler, BMW, and especially JLR found themselves in deep trouble.

Many manufacturers argued toward the Commission that the corona pandemic had changed all parameters and that it was impossible to comply with the new rules in 2020. They asked for a moratorium on the CO2 objectives, but the EU Commission has rejected this.

An additional reason that the exemption for 2020 wasn’t allowed was that manufacturers were not unanimous about the demand. Some of them argued that they’d made huge investments to meet the targets, while others already bought quotas to lower the bill.

To limit the fines’ impact, the EU administration developed a system of so-called ‘super credits’ because one sells zero or low emission vehicles that are counting for one and a half or two. Each manufacturer has its own target depending on different types of cars made, weight, size, etc.

When applied, the super credits can influence the average total seriously. The system’s biggest beneficiary is Renault that jumped to second place in the ranking and managed to stay under the target set by the EU rules. In particular, the super credits (thanks to Zoe) permitted to lower the average for Renault by 11 grams, from 105,5 to 95 g/km.

Fiat Chrysler Automobiles (FCA) solved the problem by buying credits from Tesla (for €1,8 billion over three years). Even Volkswagen had to limit the damage by buying quotas from the Chinese manufacturer MG. The postponed launch of the ID.3 (due to corona and software problems) has caused problems here. That’s why VW is pushing so hard to sell electric vehicles these last weeks of the year. The ID.3 became the best-selling electric car in Europe in October and probably November).

Fines will be paid

Meanwhile, the German premium manufacturers are battling to keep the fines as low as possible. BMW will be on the verge of avoiding many fines because the market has suddenly developed a great enthusiasm for plug-in hybrids, for which the company can also have the benefit of super credits.

The same accounts for Daimler. The group’s target is 100 g/km, adapted to its car portfolio’s typology, but descending on average more than 20 g/km will not be possible, not even with super credits.

The European record holder is Jaguar Land Rover, with an average of CO2 emissions of 160 g/km, with not many super credits to be counted (only for the Jaguar I-Pace and some PHEV-versions of different models at Land Rover that are now being introduced). JLR-owner Tata will once more have to look in its purse to see if there’s still money left to compensate for its English subsidiary’s ‘gluttony’. 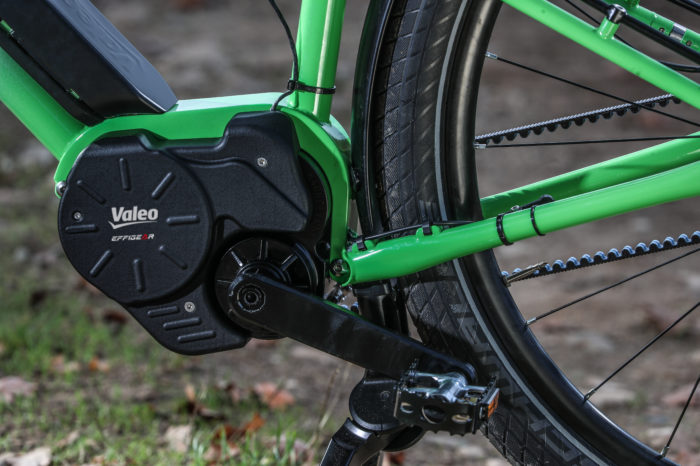 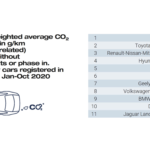