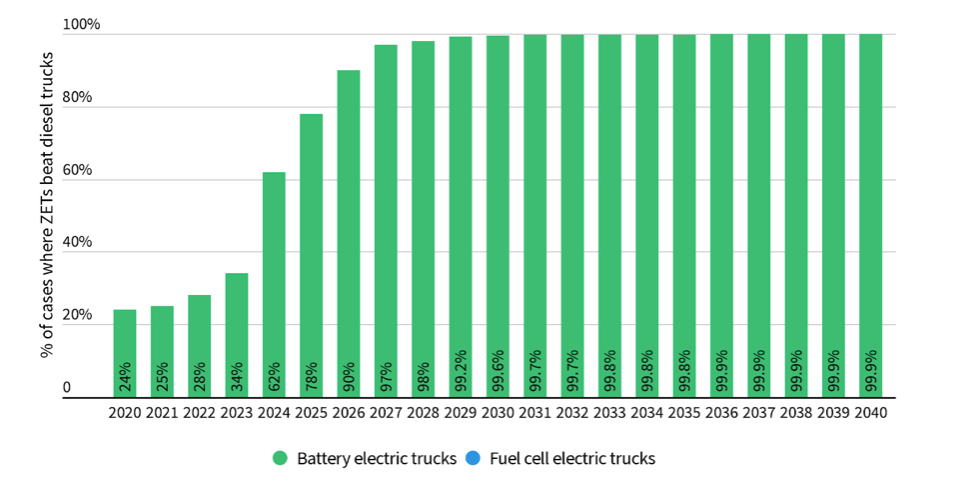 According to the TNO study, zero-emission trucks will beat diesel trucks in costs and capabilities for almost 100% from 2030 onward; Fuel cell trucks account for only 0,02% /T&E

A new study by the Dutch technical research institute TNO about the possible uptake of zero–emission trucks to replace diesel in the coming years shows the battery-electric truck (BET) is the most cost effective (only) option from 2030. Fuel cell trucks will play a marginal role due to higher costs.

By 2035, 99,8% of the fleet of all urban, regional delivery, and long haul trucks could potentially be replaced if manufacturers and charging infrastructure can keep up the pace. The study ordered by NGOs Transport & Environment (T&E) and Agora Verkehrswende confirms the findings of the PwC report saying the BET will beat the diesel truck in TCO by 2025.

This advantage in the Total Cost of Ownership of the battery-electric truck would even be the case if battery prices do not come down as fast as expected, diesel prices would be relatively low, or electricity prices relatively high, TNO says. The calculations also evaluate costs for building the (fast-) charging infrastructure.

For 0,2% of the fleet sales, zero-emission vehicles (ZEVs) cannot replace diesel trucks due to the range limitations of BETs. Fuel cell trucks on hydrogen that can cope with extra long distances are not cost-competitive as they require 30% more energy in the process than BETs. But they will be useful in specific applications, the researchers think.

Heavy trucks burning hydrogen or e-fuels (made from hydrogen and CO2) in an internal combustion engine are not considered in the study, as are synthetic bio-fuels. Due to their limited availability, synthetic fuels should be reserved for hard-to-decarbonize sectors, e.g., shipping and aviation, T&E says.

Still, by being far more energy efficient than internal combustion engines, the energy costs per kilometer of BETs will be 1.1 to 3.3 times lower than those of diesel vehicles by 2030. In TCO, from about 2030 onwards, BEVs are expected to be the most cost-effective option surpassing diesel for all vehicle types.

In practice, TNO warns that the actual uptake of ZEVs will likely differ from the uptake potential determined in this study (99,8% by 2035). TCO is crucial for the transport sector, but the investments needed, hesitation about the new technologies, possible delays in deliveries by manufacturers, and infrastructure build-out could make a huge difference.

Range limits are one of these ‘hesitating’ factors for transporters. Still, the TNO study says the technology is here today for pure electric ranges up to 300 km and will be extended to 500 or 800 km by 2030.

As EU regulation says, a truck driver has to rest for 45 minutes after four and a half hours of driving (±350 km); this could be done during recharging stops. The daily driving period must not exceed 9 hours, after which 11 hours of rest are mandatory. 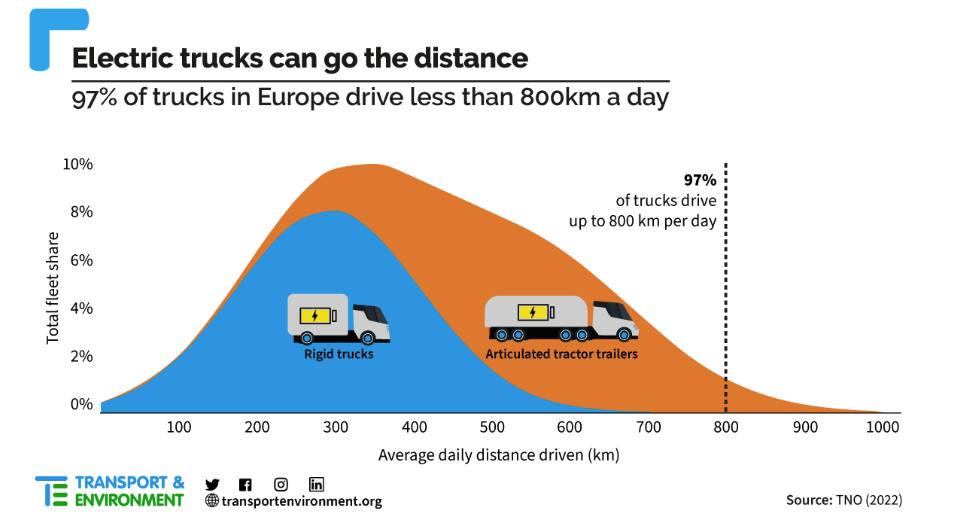 Almost all freight trucks in Europe travel less than 800 km a day, the TNO study shows, which is within the range of the newest battery electric trucks when charged during the legally required driver breaks.

Another point of discussion is the ‘loss of payload allowed’ by the heavy batteries the BET has to carry compared to the diesel truck. The PwC study mentioned before states electric trucks with 600 to 850 kWh batteries, capable of ranges from 500 to 700 km for the long haul, weigh themselves 4,3 to 5,3 tons.

Compared to 2,2 tons for a diesel truck and 2,3 tons for an FCET. TNO assumes this difference will shrink as batteries get more compact and lighter in the future and an EU regulation allowing 2 tons extra for zero-emission vehicles.