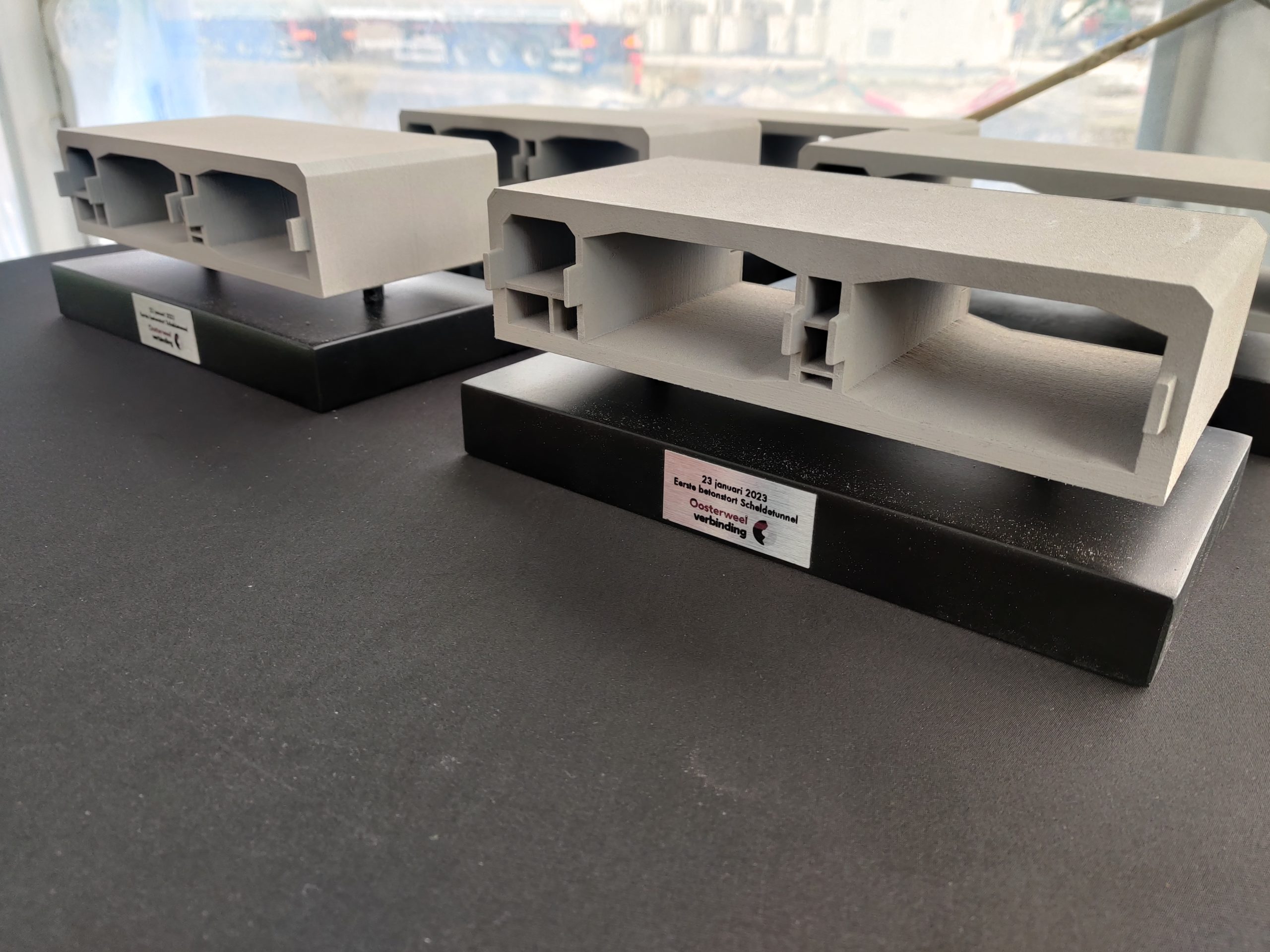 In Zeebrugge, the concrete mixers start turning so that in the next two years a total of eight tunnel elements can be built like shown here on scale models /Belga

The shipping of the separate tunnel elements from Zeebrugge via the North Sea and the western Scheldt to Antwerp will be tricky. However, transport over water is the only option for structures of this size.

The construction of the Oosterweel connection has been one of the largest construction sites in Europe for decades, and building the eight tunnel elements in itself is a daring feat.

Preparations of the Scheldt tunnel started in 2021, with the excavation of a temporary construction dock in Zeebrugge. Once the tunnel elements are transported to Antwerp, the remaining quay wall will be used for further developing the harbor’s activities. “In this way, we strengthen our port’s position and anchor local employment,” Brugge’s Mayor, Dirk De fauw (CD&V), says.

Flemish Minister for Mobility Lydia Peeters (Open Vld) would like to see more goods transported by water. “That is why we must continue to invest in our ports,” she explains. “It’s also a way to fight road congestion problems.”

The eight tunnel elements will be sunk to the bottom of the Scheldt, and together, they will form a 1,8 km long tunnel. Each tunnel element is 160 meters long and weighs 60 000 tons.

The Scheldt tunnel will have three lanes in each direction and a separate bicycle tube in the middle. The tunnel will go underground on the left bank between the Blokkersdijk nature reserve and the Saint Anna forest.

On the right bank, the tunnel will be at the top of the North Castle. The tunnel should be open to the public in 2030. The total cost of the Scheldt tunnel is 670 million euros; the investment in the construction dock alone amounts to 150 million euros.

The first portion of concrete poured on Monday in the presence of Minister Peeters and the Antwerp Alderwoman for the Port of Antwerp, Annick De Ridder (N-VA), was nothing more than a symbolic event. Both politicians again pointed out the importance of the Oosterweel connection, for mobility in Flanders and the quality of life in the wider Antwerp region.

However, not everybody is pleased with the new Scheldt tunnel. According to several protesting nature associations, constructing the Oosterweel connection and expanding the port will lead to thousands of extra trucks on the roads. Each of the protesting associations has its own arguments.

Residents and environmental activists from ALR (Actiegroep Leefmilieu Rupelstreek) fight for the preservation of their industrial heritage, better management of nature in the region, and better and livable mobility.

According to Climaxi, the treatment of the polluted water at the Scheldt tunnel site is insufficient and thus a threat to the living environment. Action group Red Onze Kleiputten, in their turn, objects to the fact that excavated soil from the Oosterweel yard is being dumped in the pits.

They plead for the sanitation of the nature reserve between Terhagen, Boom, and Reet. And finally, the citizen’s platform OnzeMobiliteit (Our Mobility) strives for better mobility and fewer traffic flows through living areas.

The four nature movements announced on Sunday they’re going to the Council for Permit Disputes (Raad Voor VergunningsBetwistingen, RVVB) against the environmental conditions for building the Scheldt tunnel for the Oosterweel connection. They’re particularly concerned about the quality of groundwater that is pumped up. According to them, the standards for discharging that water are insufficiently strict.

Both Lydia Peeters and Annick De Ridder regret the procedure against the Scheldt tunnel permit. They say they’re convinced that they’ve dealt with it sensibly. “Every effort has been made to work thoroughly and scientifically,” they say. They also hope this procedure will not cause too much delay.