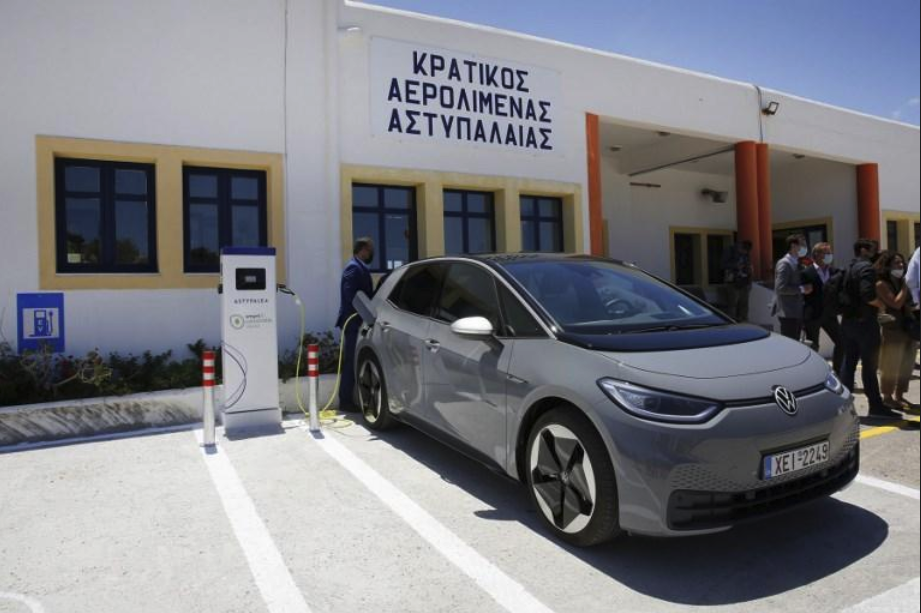 An electric Volkswagen ID.4 is charging in front of Astypalaia’s airport in Greece, the island Volkswagen helps turning into a model climate-neutral mobility island /AFP

The Greek government has finally thought its climate plans through and is joining the leading group of European countries to ban the sales of new ICE cars already in 2030, five years ahead of what is currently on the EU Commission’s table. Second-hand cars are not affected.

In 2025 Greece wants all new taxis in major cities Athens and Thessaloniki to be electric and one-third of all rental cars. These measures are part of the four key reforms in the plan Prime Minister Kyriakos Mitsotakis wants to push through to reduce CO2 emission in Greece by 55% by 2030, 80% by 2040, and 100% by 2050.

First is a climate law. Second, setting up a new framework for the production and storage of electricity from renewable energy sources. Third, a four-year plan to switch to a circular economy.

And last but not least, Greece will reform its Hellenic Hydrocarbon Resources Management, a wholly state-owned company set up in 2011, to promote Greece as an attractive oil and gas destination to international investors. A complete 180-degrees U-turn.

“At the same time, we are leading the way in investments in renewable energy sources and in electricity, but at the same time – and I want to emphasize this – we are also becoming a hub for the transfer of clean energy to the Mediterranean,” Mitsotakis said.

In March 2021, the Netherlands, Denmark, and Belgium demanded the EU authorities to fix a date for a ban on sales of new cars with an internal combustion engine (ICE).

At that time, the Netherlands was the only one suggesting an actual date: 2030 and announcing it later to be the official goal. Six other EU member states joined the action without setting a date yet: Austria, Greece, Ireland, Lithuania, Luxembourg, and Malta.

Although no direct member of the EU, Norway is the absolute forerunner in Europe, with going electric no later than 2025 and already achieving today more than 70% of new car sales being electric.

In Belgium, Flanders just set the target for banning ICE cars by 2029, a compromise two years later than proposed by the regional Minister for Mobility and at the same time dropping a proposed ban on selling ICE second-hand cars by 2030. The latter was never heard so far in the whole of Europe.

But Belgium, being a federal state with three regions, hasn’t announced its official proposed end date yet. The Belgian demand to the EU to fix an end date for ICE cars was signed by two ‘green’ federal Ministers, Tinne Van der Straeten (Energy) and Georges Gilkinet (Mobility).

There is a federal agreement to drop all tax benefits for ICE company cars by 2026, only granting it for fully electric cars. Company cars represent more than half of the yearly new registrations in Belgium. With Flanders digging in its heels on 2029, it looks Belgium too will cant over to 2030 within the EU.

Sparing PHEVs or not?

Sweden and Denmark agree on 2030 too, with Denmark leaving a loophole for the plug-in hybrid (PHEV) until 2035. UK’s Prime Minister Boris Johnson is on the same wavelength, advancing the initial ICE ban deadline by five years to 2030, leaving PHEVs undisturbed until 2035.

Iceland follows its Nordic fellow countries for 2030 but wants to allow exceptions for rural areas where it would be difficult to ban gasoline or diesel cars.

Austria announced in July only zero-emission passenger cars, two-wheelers, light commercial vehicles, and heavier commercial vehicles are to be newly registered by 2030 at the latest. This is one of the ‘Mobility Master Plan 2030’ measures presented by Infrastructure Minister Leonore Gewessler (Green party). However, the plan is not binding.

Ireland made up its mind for 2030 too, in the meantime, with an exception granted for hybrid cars until 2035. It wants to have 845 000 electric-powered passenger cars on the road by 2030, 95 000 e-vans, and 1 500 e-buses. The remaining ICE should get more access to alternative biofuels, something the European carmakers like to hear.

Germany has reached its goal of one million EVs by the end of 2021 already. It was set by the Angela Merkel government in 2009 and questioned by many, not at least by the German auto industry. The Bundesrat, the legislative body representing the sixteen Länder, voted for a ban on ICE cars in 2030.

And now Greece has finally hatched its egg on climate action, joining the leading group of countries proposing 2030 as the end of the (new sales of) combustion engines.

France following its own course

France has not yet outspoken its final ambitions, but earlier, 2040 was put forward to kill ICE sales, as did Spain. Last October, President Macron unveiled a plan for the French automotive and aerospace sectors to share a budget of four billion euros to reach specific objectives, including 2 million EVs and hybrids produced in France by 2030.

When presenting its ‘Fit for 55’ plans for the Green Deal to reduce CO2 emissions by 55% by 2030, the EU Commission suggested the 2035 end date for ICE cars, including PHEVs. Macron wants the EU to ‘spare’ PHEVs even beyond 2035. Still, the EU Parliament and all member states have to agree on the proposed deadlines.

Italy, finally, doesn’t seem prepared to accept an ICE ban anything earlier than 2035. As news broke a few weeks ago, Prime Minister Mario Draghi is in talks with the EU concerning an exception on the proposed 2035 deadline for Italian supercar makers like Ferrari or Lamborghini.

Apart from Slovenia that proposes 2031 for an ICE ban, it remains deafening silent in the rest of Eastern Europe. 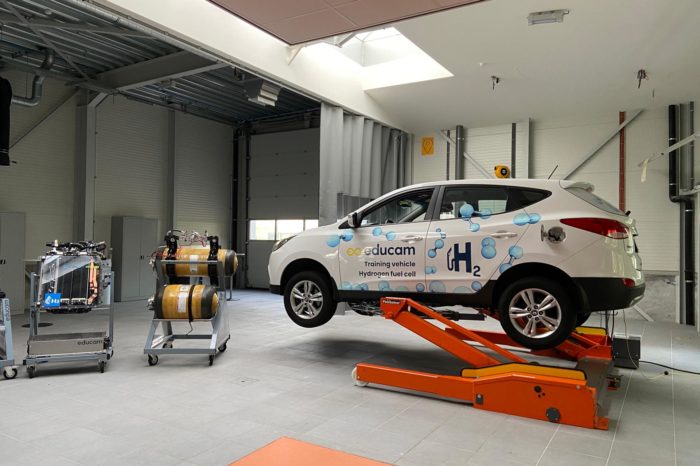 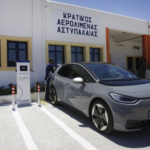