How difficult can it be? Choosing between identical twins: the Hyundai Ioniq 5 and the Kia EV6? /Hyundai-Kia

How to choose between two twins? Not identical, but both beauties in their own style. We drove the Hyundai Ioniq 5 and Kia EV6 both for a week long. Technically, it’s a close draw. So it will come to design, personal taste, and how much you want to pay for the must-have options.

What’s clear after these two weeks is that the South Koreans have come a long way in creating something very appealing to our western taste today, at a reasonable price and in no way inferior to its European competitors. Even taking the lead, we would dare to say in the emerging EV world.

Sibling rivalries are common everywhere, and Kia and Hyundai aren’t exceptions. The first is minority-owned by Hyundai Motor, which holds a 33,88% stake. But Kia is the oldest and has, in turn, a stake as a minority owner of more than twenty of the doming Hyundai group’s subsidiaries.

The number one (Hyundai) and number two (Kia) in the South Korean automotive industry have managed a great leap forward in design, quality, and technicality. Remember, both started as contract builders to build well-known ancestors like the Peugeot 604 or Fiat 132 (Kia) or the Ford Cortina (Hyundai), to name a few.

Initially, Kia entered Europe with the Pride supermini, a rebadged version of the late 1980’s Mazda 121, but really got noticed with the Sportage from 1995 on. In 2005, Kia decided to go for a more American-European design by hiring Tom Kearns as Chief Design Officer, the man previously responsible for introducing hard angles and sharp lines at Cadillac.

In 2006, the latter was joined by Peter Schreyer. He used to draw the fluent lines of the Audi TT and became the man to oversee the complete restyling of Kia’s line-up with design studios in Frankfurt, Los Angeles, Tokyo, and the Namyang Design Center in South Korea.

But the new lines of the EV6 today, we have to thank Karim Habib for. He is of Lebanese descent but grew up in Canada. He joined Kia in September of 2019 after a passage through Mercedes-Benz, BMW, and Infinity.

In 2006, Hyundai hired Thomas Bürkle as head of the company’s design center in Rüsselsheim, Germany, the man responsible for the looks of the BMW 3-series (E46) and 6-series (E63). Eight years later, we find Peter Schreyer as chief design officer (CDO) of Hyundai Motor Group, responsible for the company’s long-term design vision and differentiation.

He stood at the cradle of Genesis, a new luxury brand that was created in 2015 as Hyundai’s upscale spin-off. Belgian star designer Luc Donckerwolke originally joined the Hyundai Group in 2016, gradually overseeing design for Hyundai, Kia, and Genesis brands as the Chief Design Officer.

The man who gave us the Lamborghini Murciélago and Gallardo, among others, took over from Schreyer in 2018. After a short absence due to personal reasons, he rejoined Hyundai in 2020 as a chief creative officer (CCO) at Genesis and Ioniq, the electric subbrand of the Korean carmaker.

Both of good birth

So, you can’t deny today’s Ioniq 5 and EV6 not to be of good birth. The Hyundai is more rectangular, with sharper lines. In our opinion, the Kia is the more fluent, the more sleek-looking, sportier of the siblings. Underneath, both share the all-new, dedicated architecture called Electric-Global Modular Platform (E-GMP).

The Kia is just 6,5 cm longer than the Ioniq 5. The latter is 5,5 cm higher, which translates to a boxier, SUV-like appearance, while the other tends more to the cross-over style, that’s quite popular these days. Both have good-looking ‘flush handles’ incorporated into the body, but you might want to opt for the electric popping-up version instead of the manual.

Don’t worry about interior space. Both are royal to that extend, even for adults sitting in the second row, thanks to the specific layout of an electric car that can offer a flat floor all the way. With its higher roofline, the Ioniq might look spacier.

The Ioniq’s boxy feeling extends to the interior with the dead straight dashboard and integrated touch screen, giving it a more Spartan look than the EV6’s 12,3-inch panoramic displays, slightly curved toward the driver. But whatever is projected on the screens is remarkably similar with all connectivity options and driver information you can dream.

One particular feature on the EV6 screen we liked is the image of a rear-facing mini-camera incorporated in the side mirrors projected in a circle in the dash the moment you use the direction indicator. Although the classic blind-spot warning is available, it shows you actually what’s behind you without having to look in the mirror. 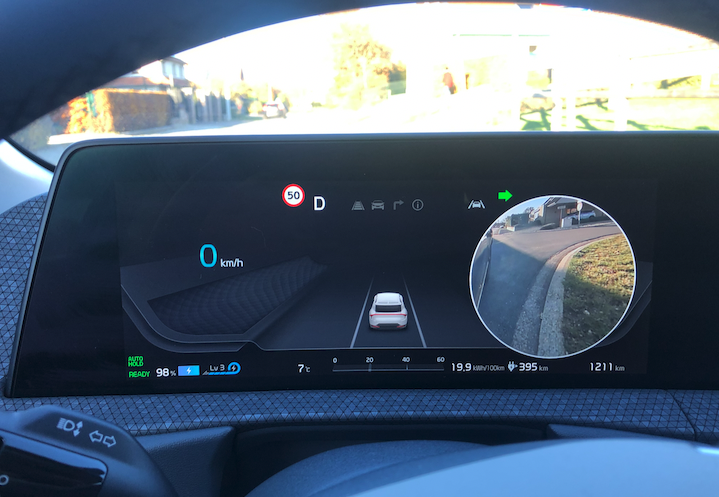 The GPS navigation and live traffic information offered in both are the same, doing the job, but couldn’t convince compared to navigation systems on smartphones offering far more customizing possibilities. Luckily, Hyundai and Kia let you choose between Apple CarPlay and Android Auto to have your favorite TomTom or Waze app as an alternative.

Eyes on the road

Both cars offer the option of a head-up display projected on the front windscreen so that you can keep your eyes on the road. Both also provide a myriad of ADAS (Advanced Driver Assistance Systems), including adaptive cruise control, lane-keeping, and Highway Driving Assist to keep the car between the lines with automatic adjusting steering.

In the Hyundai we drove, that was sometimes a little bit too enthusiastic, which can be a daunting experience for somebody not used to having the car steer itself. It’s no autopilot, though, and you have to keep your hands on the steering wheel at all times. Even when you do, the Kia tends to ‘warn’ you continuously, which can be annoying.

What also can be annoying is the ambient noise that penetrates the cockpit, especially tire noise on rough surfaces. They both suffer from that, and there are examples of competitors offering far better sound insolation to that extend, like the Lynk & Co PHEV or the Volkswagen ID.4, to name some examples.  When it is quiet in the Kia, the noise of the optional heat pump can be exasperating.

When it comes to driving, both offer all pluses you can expect of an electric car. Sharp accelerations like a sports car or ECO driving to save energy and range. The ECO modus in the EV6 can be taunting slow, but savings are impressive, with us actually achieving 16.6 kWh per 100 km, as indicated in the sales brochure.

When it comes to actual range, the Kia has a clear advantage, featuring a 77,4kWh battery in the RWD version we drove. The Ioniq 5 has a 73 kWh battery for a 481 km WLTP range. The Kia advertised a 528 km range. But in winterly circumstances, like these days now, we didn’t get more than 420 km served actually. In the Hyundai, that would rather be 385 km.

When it comes to fast-charging, both are among the champions on the road these days, thanks to the 800 Volt system and the chargers incorporated. With theoretical maximum DC charging of 221 kW DC (Ioniq) and 233 kW DC (Kia), they outperform even the Mercedes-Benz EQS flagship and come close to a Porsche Taycan.

Theoretically, you could be on your way in 18 minutes after charging from 10 to 80%, but you’ll seldom find a charger giving you that in optimal circumstances. Depending on ambient and battery temperature and the charge left in the battery, we didn’t get more than 48 kW out of a Fastned 350 kW charging station when trying. Still, the possibilities are impressive.

A nice feature they’re both offering is the 220 V plug inside where you can plug in your laptop or any other appliance like at home. Even when you are in the middle of nowhere, far from civilization and its comfort of the grid. With an adaptor, you can do that also on the outside at the charging port. That’s called V2L or ‘Vehicle to Load’. 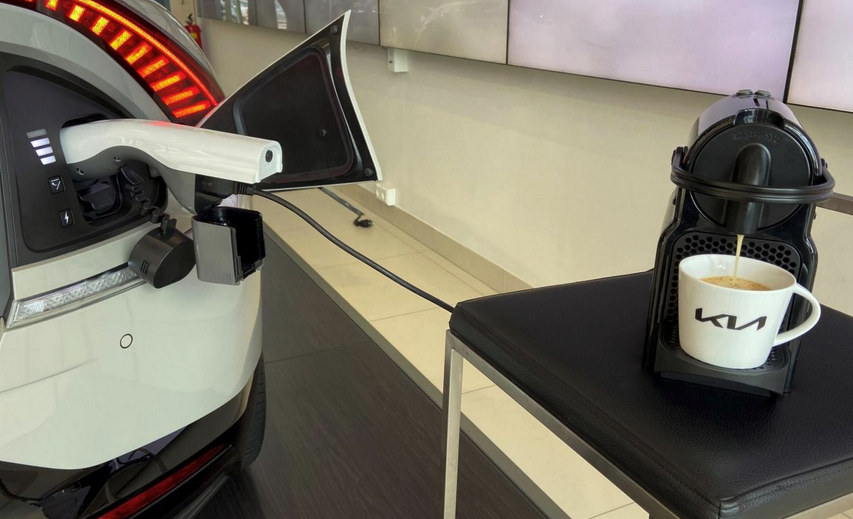 Plugging in a coffee machine on 220 Volts: Vehicle to Load (V2L)

Customizing to your taste

So if we have to choose a winner, what would be the final verdict? We would rather fall for Kia’s sleek and fluent styling, its more premium feeling in the Earth version we drove, and its less harsh suspension settings. Or even the seven-year warranty instead of five. But as we said, if we are honest, it all comes to personal taste and the price you are willing to pay to customize them to your liking. 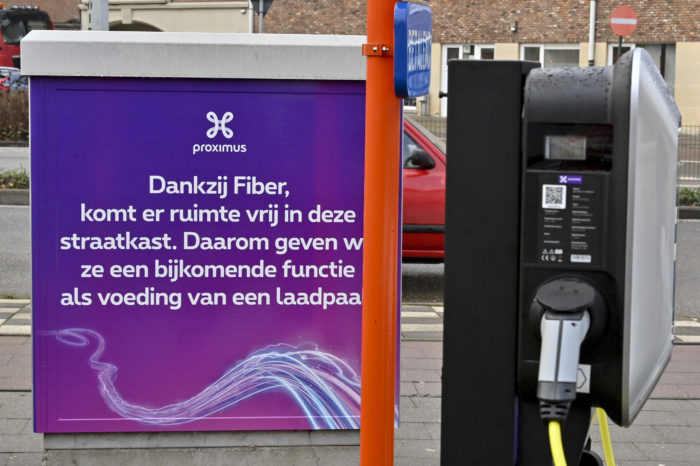 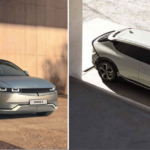