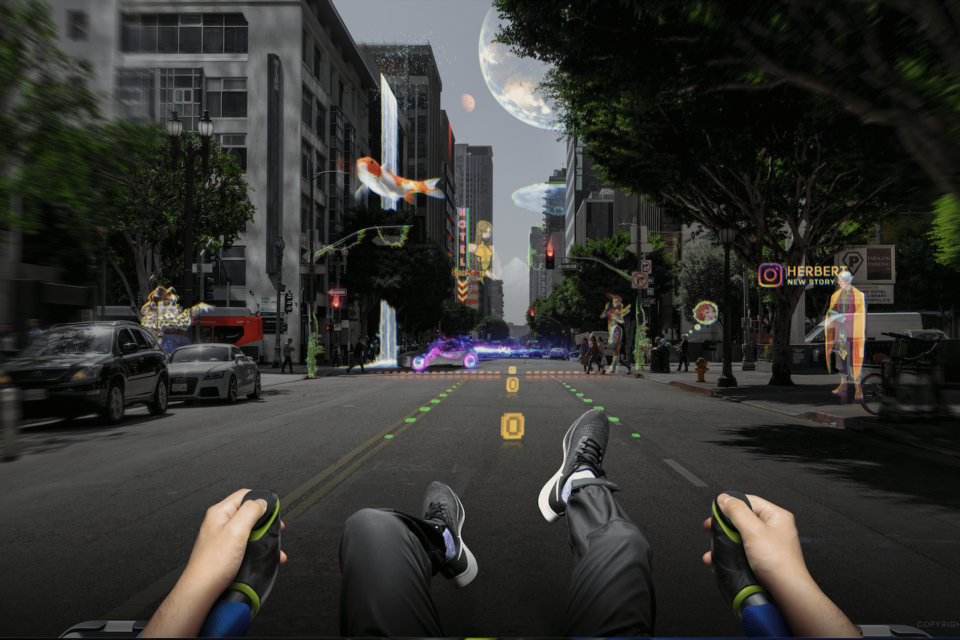 While being driven remotely by a professional Uber driver, imagine a royal augmented reality treatment in the Holograpter car /WayRay

How weird can it get? Sitting on your ‘throne’ in the back of an Uber car that’s operated over 5G by a professional driver wearing VR goggles some miles away, while the whole car and the environment you’re driving through becomes one Metaverse to play with.

Like a gigantic head-up display (HUD), holographic augmented reality (AR) images are projected on the car’s glazing, merging with what you actually see outside. It’s an idea of Russian-Swiss deep tech company WayRay that has taken shape in the Holograktor Car, the first ‘Metaverse on Wheels’ as they call it.

Technically, a metaverse is a virtual-reality space in which users can interact with a computer-generated environment and other users. Prepare for a voyage beyond imagination, in this Holograktor EV.

Head-up displays where information like speed, traffic signs, or an image of the activated adaptive cruise control is projected right in front of the driver on the windscreen are commonly available in the premium segment today. So far, it’s pretty easy to imagine.

Zurich-based high-tech company WayRay is the brainchild of Russian entrepreneur and founder Vitaly Ponomarev, a forerunner on using virtual and augmented reality for a new generation of HUDs.

WayRay creates head-up displays in cars that go far beyond today’s HUDs, being dynamic and giving depth to the system. Like a traffic sign starting as a distant spot, growing more prominent as you approach, contrary to the fixed HUD images of today.

WayRay calls it Deep Reality Display® technology, where different parts of the virtual image can appear at different distances, soliciting the driver’s attention only when becoming crucial. Hyundai and Porsche invested in the young tech company as believers but didn’t take it into a production car yet.

The technology was first showcased at the 2017 Consumer Electronics Show in Las Vegas with a holographic AR infotainment system inside the Rinspeed Oasis concept car. WayRay’s first True AR Head-Up Display system was displayed in the Pininfarina Teorema concept in July 2021.

The beauty of the system is it’s far more compact than traditional HUDs, needing only three-liter of volume in the dashboard instead of 25 to 30 liters in a premium car today, without using an extra screen. WayRay uses a specially treated layer into the dashboard’s laminate to reflect the image onto the windscreen.

The Holograktor Car on display now is of a whole different playing field. Literally, as it showcases how entertainment can become a significant factor in the cars that will be used for ride-hailing in the future, especially with the youth growing up with virtual reality and Metaverses in electronic gaming.

“The seamless connection of the virtual and real worlds will offer greater safety, comfort, services, and entertainment. The three-seat Holograktor can either be driven conventionally or by remote control,” WayRay states on its website.

Driving yourself or not

It can accommodate three people with one driving or not. The vehicle can be driven remotely over the 5G cellular network by a driver sitting in a simulator miles away, wearing VR goggles. Each of the passengers in the car has his Metaverse world projected on the windscreens in their sight and can interact with it using joysticks in the armrests of the seats.

The driver can sit miles away in a simulator, wearing VR goggles to steer the car through traffic /WayRay

The best seat in the house is the single back seat, like a throne overseeing the whole car and the huge front windscreen where the AR images are projected. Both front seats are half a meter between them to give the rear passenger a complete view forward.  “Its unusual single rear seat ‘throne’ layout was inspired by data showing that more than 80 percent of Uber trips were for one person only,” WayRay says.

And the whole idea is to give that single client a royal gaming and entertainment treatment while being driven from one end of the city to another. The obsolete steering wheel is sliding forwards, fitting it into a groove in the dashboard to be forgotten.

From your throne, you can sing out loud with the onboard karaoke, play games in different virtual worlds with your friends remotely, or do more serious things. “Decide for yourself what you do when riding with personalized True AR™ content: rest, work, play, sing, whatever you want,” WayRay proposes.

The fully electric Holograkter car is designed as a holographic AR showcase by the Russian Koenigsegg’s head designer Sasha Selipanov. By coincidence, he was already confronted with head-up display technology at a young age, as his father was a military engineer working on HUDs for fighter jets.

The car’s wing doors allow for better access in the 4,416-meter-long car, wider than a regular SUV.  The ‘bubble’ on the rear of the roof – called the shrimp internally – houses the projecting technology for the rear passenger. 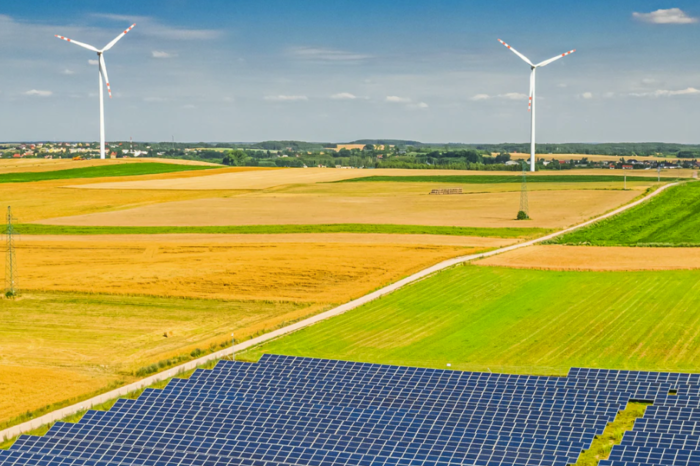 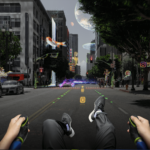