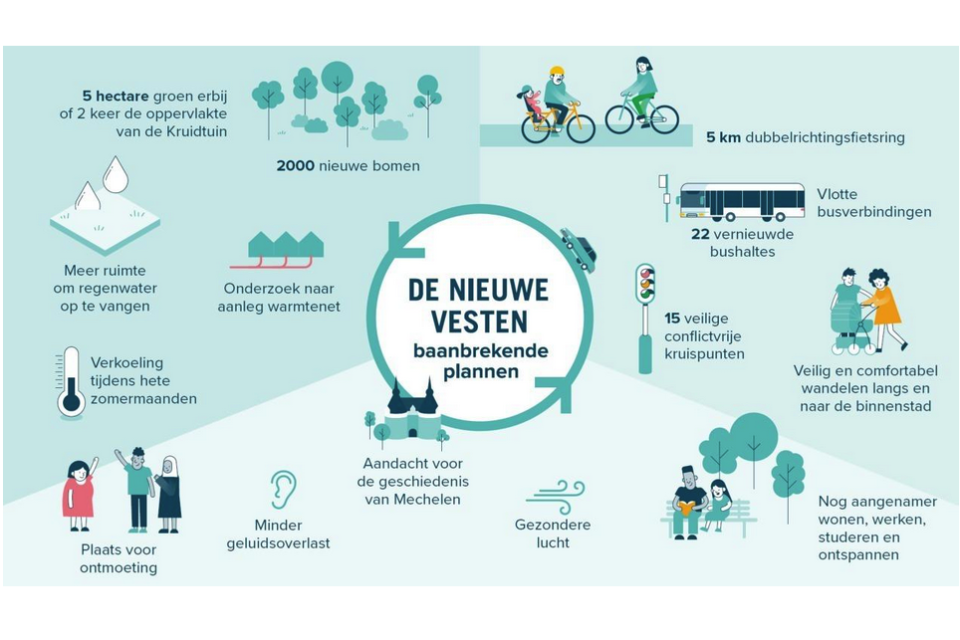 This illustration emphasizes all advantages of the Nieuwe Vesten project: conflict-free crossings, more green and free space, and a healthier atmosphere /bartsomers.be

This summer, the inner city beltway of Mechelen/Malines – the so-called ‘Mechelse Vesten’ – will become a green pedestrian and cyclist’s zone in which through traffic will be banned. The first adjustment works start by the end of August and the final result is expected to be ready by 2029. The entire project represents a €55 million investment.

On Monday the local administration in Malines decided to go ahead with the proposed plans and to gradually introduce one-way traffic with temporary road signs. Traffic on the 5 km long beltway will only be allowed to move one-way counterclockwise.

Local car traffic will be allowed, but there will be more space available for cyclists, pedestrians, public transport, and public green zones. Through traffic coming from the E19 highway heading towards Bonheiden and Putte will be led over the new so-called ‘Tangent’ with tunnels under the channel and the city’s railway station.

Local authorities, with nominal Mayor Bart Somers (Open Vld) and also Flemish Minister of Internal Affairs, Flemish Minister of Mobility Lydia Peeters (Open Vld), and the Agency for Roads and Traffic (Agentschap Wegen en Verkeer, AWV) earlier ordered a study to analyze how to improve mobility in the city. The study concluded that introducing one-way traffic on the beltway would be the best solution for a smooth traffic flow around the city.

“These trail-blazing plans will transform the Mechelse Vesten into an attractive, agreeable, and green gateway to the city,” Bart Somers told newspaper Het Laatste Nieuws. “We will provide 2 000 trees, 5 hectares of additional green zones, a smart mobility hub with 50 parking places for shared cars, and 51 000 square meters of softened soil.”

Safety is essential in a city like Mechelen, confirms Minister of Mobility, Lydia Peeters (Open Vld), in Bart Somers’ press release. “The new plans contain wide and easily accessible bicycle paths, and also pedestrians will get the safe space they deserve. Buses will get a separate lane to keep on driving unhindered. The entire project should be a stimulus for Mechelen’s citizens to move around in a more sustainable way.”

In a first reaction, many inhabitants seem to be worried about possible traffic congestion the works will create. But, according to the Chairman of Mobility, the opposite will be true. “Traffic will be more fluent because there are no conflicting situations anymore. Traffic lights will remain green as long as there are no crossing cyclists or pedestrians.

The advantages, therefore, are countless, the Chairman continues. “There will be 15 conflict-free crossings, 22 new and easy bus connections, and 5 km of bicycle beltway in both directions. Air quality will improve and there will be less noise nuisance and more room for recreation and socializing. The city will become a nice and agreeable place to live, work, study, or relax.”

In the meantime, local authorities in Malines and the AWV are organizing a large-scale information campaign to inform the public. All residents will find a flyer in their mailbox and the website denieuwevesten.be will provide a route planner, among others.

More detailed plans about the temporary organization of the Mechelse Vesten will be available as of the end of January. And in March, the city’s authorities will organize info sessions for the public. People living or working in Mechelen are free to participate in the project by sharing their ideas about the temporary or final reorganization of the Mechelse Vesten.

According to the Chairman of Climate and Public Works, Patrick Princen, the Nieuwe Vesten is also a climate project. “By freeing more public space for additional green zones, Mechelen’s inhabitants can cooler and cleaner air. The Nieuwe Vesten will – literally – give us more oxygen.” 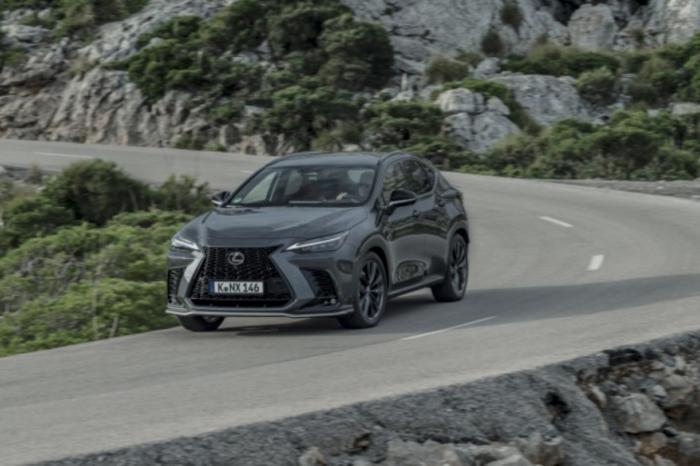 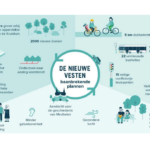