Does the Solterra EV tick all the Subaru boxes? We drove it. We were able to have a first drive with the first Subaru EV, the Solterra, on a test circuit near Aachen /Subaru

As one of the first journalists in Europe, we were able to drive the first Subaru EV, the Solterra, on a closed test circuit in Aldenhoven, near Aachen (Germany). This spring, the Solterra arrives on the market together with the Toyota bZ4x, its twin brother.

But to say that Solterra is a mere copy of its Toyota counterpart is too short-sighted. It ticks all the boxes its ‘creators’ wanted it to do. Unlike Nissan, Japanese car manufacturers were cool lovers of electric cars. Not that they weren’t interested in it, but they also looked at other possibilities and, in the case of Toyota, were the masters of hybridization.

Small and… a little wayward

Subaru is a small car manufacturer. Last year, it produced 860 000 cars. 640 000 were sold in the US, 100 000 in homeland Japan, and 120 000 in Europe. It has always been known as an independent niche manufacturer specialized in all-wheel-drive. Despite the rally heritage of former days, it is known as an SUV specialist (95% of total sales).

Who thought that this was the first-ever electric Subaru is wrong. In 2003, Subaru launched the concept of a small electric car, the R1e. But, unfortunately, the public interest was… non-existent. Ever since, the small Japanese manufacturer has been careful with its electric investments, although (mild) hybridization made its intro.

So, when it saw that electric was really becoming the topic, Subaru turned to its big brother (and co-owner) Toyota. Japan’s number one owns 20% of the Subaru stock, but Subaru is also a shareholder of Toyota. Together, they developed the first Subaru and Toyota BEV.

When the news broke out about the Toyota bz4X and its Solterra brother, the question of whom is the rebadged version of the other quickly came to the front. Subaru emphasizes that it dispatched more than 100 engineers into Toyota’s R&D territory and that they have had significant input concerning the 4×4 version. Which, by the way, is the only one available as a Subaru. Not illogical when you know that 98% of Subaru’s sales is AWD.

With a useable battery capacity of 71,4 kW and a remarkably good drag coëfficient (0,28) for an SUV, the range will be 450 km (WLTP) with the smaller 18-inch wheels and 415 km with the more prominent 20-inch wheels and more lavishly equipped.

Subaru wants its first EV to fulfill the expectations of its loyal customers. So naturally, the car has to be safe, so compared to the Forester, torsional rigidity is increased by 70%, body roll diminished by 50%, and lateral rigidity grew 200%.

When we talk about ADAS, the Solterra has the usual driving aids for this class, an improved version of Subaru’s Eyesight system, and a new warning system for when you get out of the car that warns you for oncoming bikers.

A Subaru also has to be fun, so the suspension and steering settings are somewhat different from the Toyota, and the X-Mode AWD has a new grip control function. The driver can choose between three drive modes (power/normal/eco), but there is no real e-pedal driving because the Subaru engineers preferred what they call an easy, natural brake feeling.

Finally, a Subaru has to be tough. That’s why the permanent AWD was a must-have, why the new grip control function has five speed levels, why the Solterrra has the 21-inch ground clearance and terrain-friendly approach angles front and rear.

As already said, we couldn’t drive the car on the open road yet. So instead, we were allowed (instructor aboard) to explore the different roads and difficulties of the Aldenhoven test circuit. On the speed oval, the Solterra felt safe and stable; on the handling course, it showed an alert and sporty behavior, especially when taking its height and weight (2 tons plus) into account.

The suspension wasn’t too soft or sturdy, the road noise was subdued (a must for an electric car), and on split road surfaces or in (simulated) icy circumstances, traction and stability remained good.

The car has a long wheelbase, which means that the rear passengers have ample space, while the trunk still has 452 liters of cargo volume behind the second row. The Solterra also has a good steering feel. The brake recuperation can be altered with paddles on the steering wheel, but the differences between the different stages are far too small. All in all, the energy recuperation while lifting your right foot is not convincing enough.

For a basic version (already well-equipped), Subaru will ask something of €55 000 as a starting price. The Sky Package and the Two-tone (top) versions are more expensive. Of course, that’s not cheap, but Subarus have never been that.

Subaru offers the classic 10-year/160 000 km warranty on the lithium-ion battery. The latter can be charged at 6,6 kW/hour with AC charging, up to 150 kW/hour with DC supercharging.

The Subaru people emphasized that they wanted their Solterra first to emanate the typical Subaru values to please its small but loyal clientele. Still, they don’t hide that they are aiming at other customers. And then they don’t only think of EV lovers but also fleet managers. So it might be possible that the Solterra opens the world of fleet cars for Subaru. Wait and see. 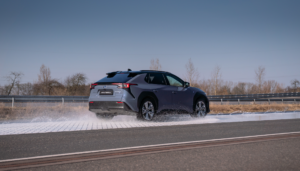 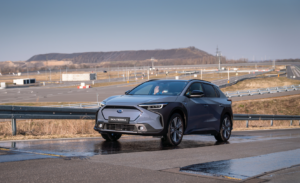 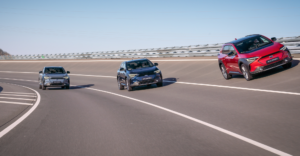 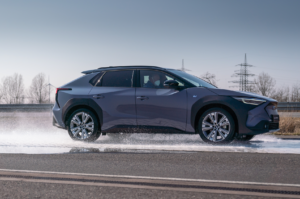