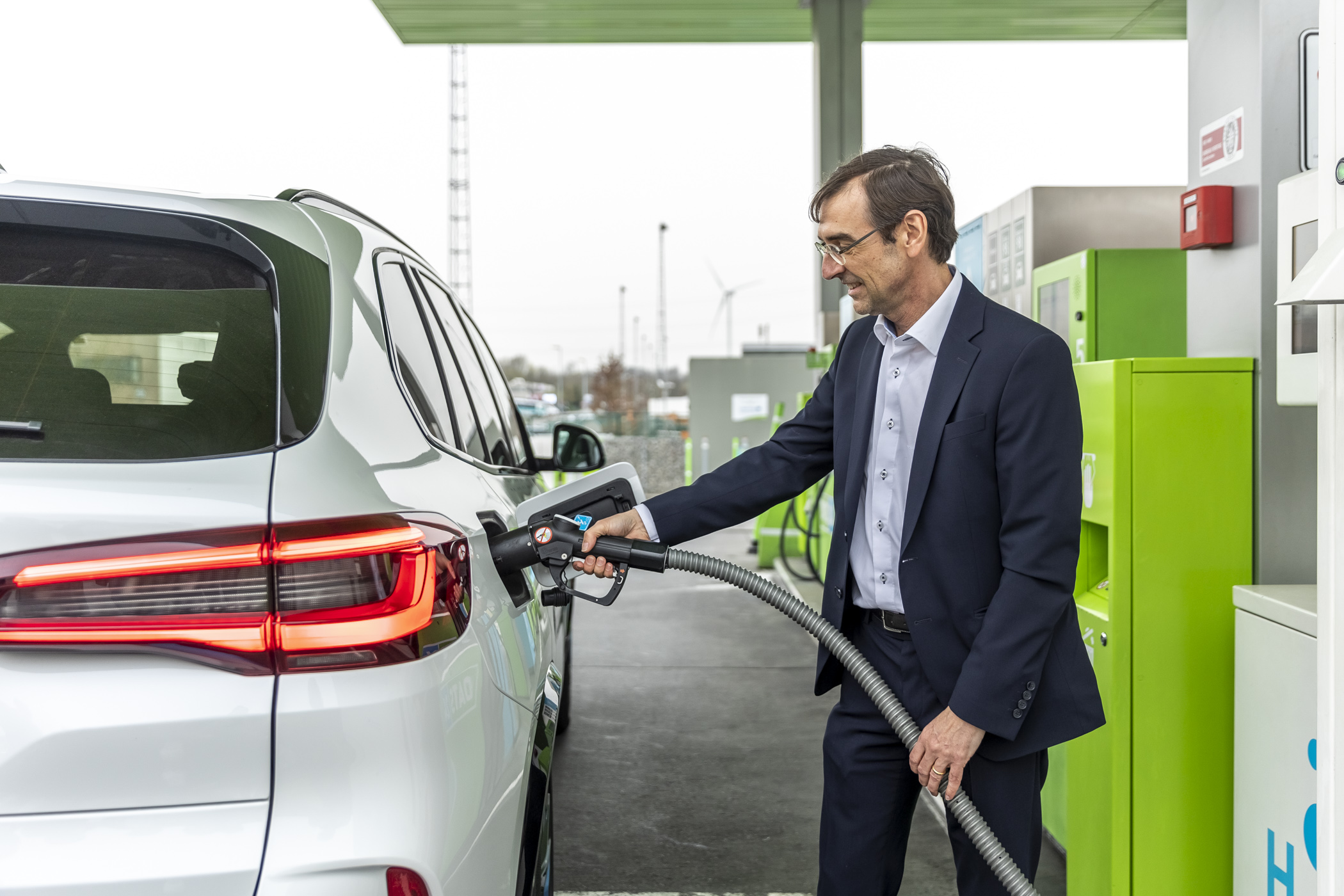 Jürgen Guldner, FCEV responsibel at BMW, is persuaded that, in a more distant future, more than one fifth of all BMWs will be hydrogen driven /BMW

Several demo cars of the BMW iX5 Hydrogen are traveling around Europe to gather support (financial and other) from all kinds of instances. BMW sees FCEVs as an exciting alternative for BEVs in the far future, and this move illustrates BMW’s belief in the technical solution.

Last week, we talked with Jürgen Guldner, Vice President Hydrogen Fuel Cell Technology at BMW Group. He presented the car to EU authorities (from Commission and Parliament) departing from the Brussels Autoworld Museum.

Afterward, we could have a short chat and drive with him before he left for Paris to demonstrate the car to the French authorities concerned. Guldner hopes to convince as many people as possible of the possibilities of his FCEV, being a better alternative in certain circumstances for a battery-electric vehicle (BEV).

BMW isn’t a newcomer in its interest in hydrogen as a fuel to drive a car. Some 15 years ago, it even had a specimen of its 7-Series prototypes running on hydrogen stationed in Brussels. It was destined to allow EU officials to test-drive a hydrogen car. This wasn’t an FCEV; it had a V12 engine burning hydrogen instead of gasoline.

At the time, we had the opportunity to drive the car for a while and discovered that it worked reasonably well but lacked the smoothness and quietness required for a limousine of this stature. If our memory isn’t fooling us, there were few other attempts for prototypes of cars that burned hydrogen to get moving.

Lately, we encountered the Mazda technical head for Europe, Joachim Kunz. He announced that the future range extender in the Mazda MX-30 BEV would be a small rotary engine that, in the future, could be able to burn hydrogen instead of other fossil fuels or gases as a support to the electric drive.

As an advocate for his FCEV technology, Jürgen Guldner sounds persuading. “Look, we at BMW are going into electrification, and in the end, we think that some 80% of our (potential) clientele will be driving battery-electric BMWs.”

“But there is that other 20% we also want to serve. They aren’t prepared to make the switch to fully electric for several reasons: reach, range anxiety, fueling time, or other more personal reasons. So we want to offer them an alternative that is also zero-emission.”

“That’s why we are touring Europe now with a few of our prototypes – which, by the way, just had a demanding winter test program behind the wheels without any major problems – and we will soon launch a limited test fleet that selected partners will drive to acquire lots more of useful information about day-to-day usage.”

An integral part of the portfolio

In the future, the aim is that FCEVs become an integral part of what BMW will be offering as personal transportation. “We’re working hard at the next generation of FCEVs that will be able to share the EV architecture of our future BEVs.”

“Therefore, we will need the fuel storage system FlatHyStor that we are developing together with other partners and where the hydrogen fuel tanks have the same shape and size as the battery pack of a BEV. For people with specific demands or personal reasons, we will surely offer one or more FCEVs in the future.”

And to make it commercially viable, these cars will have to be lighter than BEVs (for the same reach of 500+ km). The additional advantage is that one can refuel in a few minutes. The car will also be lighter than a BEV and weigh approximately the same as a PHEV of the same size.”

“More importantly, we will try to let it cost almost the same as a PHEV, and for that purpose, we have to use as many common parts as possible. Of course, it won’t be in the coming years, but the FCEV will replace the PHEV in a slightly more distant future. The (still) missing links are the obligation to use green hydrogen instead of grey and the fueling infrastructure.”

“The first problem is already partially solved,” Guldner concludes. “Just this week, I saw that green hydrogen had become cheaper than grey for the first time. This evolution will persevere in the right direction. And for the second problem, we have to talk to the authorities. That’s why we’re here.”