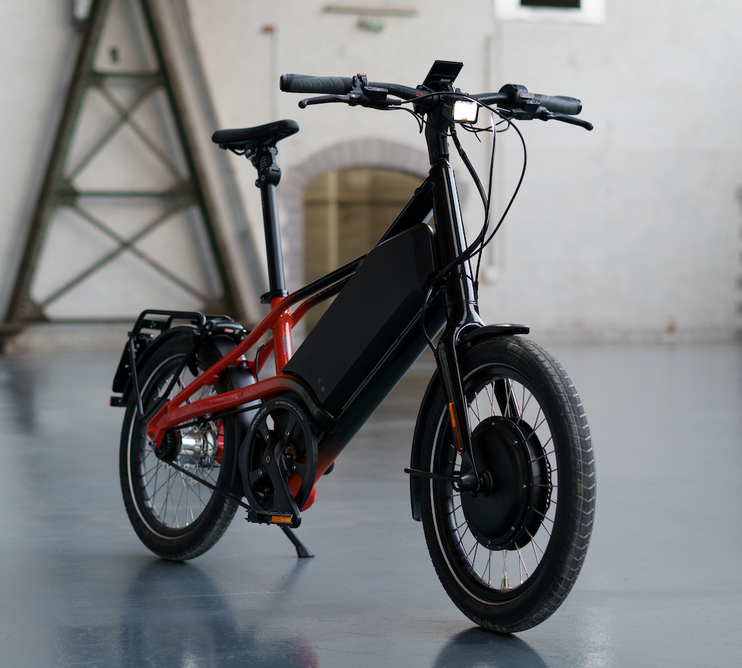 Today, they’re launching a joint project, a speed-pedelec from Ellio with the hipster design touch from Ahooga. The Ellio ‘Ahooga Edition’ sells for €6 699, which is €200 more than the standard versions.

Until now, Ellio was only selling its products in Flanders (some 600+ units), while Ahooga was selling all over the country (some 10 000+ since the start). In addition, Ahooga will soon open its first bike shop abroad in Paris.

Ahooga wants to be a worthy rival for the British king of the folding bike, Brompton. Apart from that, it offers a multifunctional city bike, and still this year, this will be joined by a less expensive model. The company wants to be a competitor for that other Belgian brand, Cowboy.

The Ellio bikes are exceptional, developed by two engineers and driven on both wheels via a planetary gear inspired by the Toyota Prius (co-founder Tomas Keppens has worked for Toyota). The primary customers targeted by Ellio are commuters who want an alternative to the car or public transport to go to the workplace.

Ahooga just got an additional financial injection of €2,4 million from the Freshmen hedge fund. It wants to accelerate development with it and expand its sales abroad. The Freshmen fund is run by Hendrik Winkelmans, the former owner of the Fiets! bike shops now sold to the Colruyt group and rebaptized ‘Bike Republic’.

Ellio got financial support of €1,5 million from the Flemish investment company (PMV) a while ago and is looking for additional financing later this year. “We want to offer our revolutionary two-wheel-drive to other, bigger bike manufacturers,” says Jorrit Heidbuchel, the other Ellio-founder.

“Ellio and Ahooga share the same vision on developing bikes as a mobility solution,” says Heidbuchel. “We see a big potential for bikes and speed pedelecs as a real alternative for cars. Being two small but complementary players in the market, we thought cooperation was necessary. So we are delighted with our Elite bike’s ‘Ahooga touch’.”

“This collaboration is very logical,” adds Tita Lambotte, Ahooga founder and CEO.” In Belgium, there is a real heart for bikes, and we have one of the highest penetration rates for e-bikes in the world. We were impressed by the quality of the all-wheel-drive technology of Ellio, called IntuEdrive. It offers better power, range, and safety than anything else we’ve seen yet.”