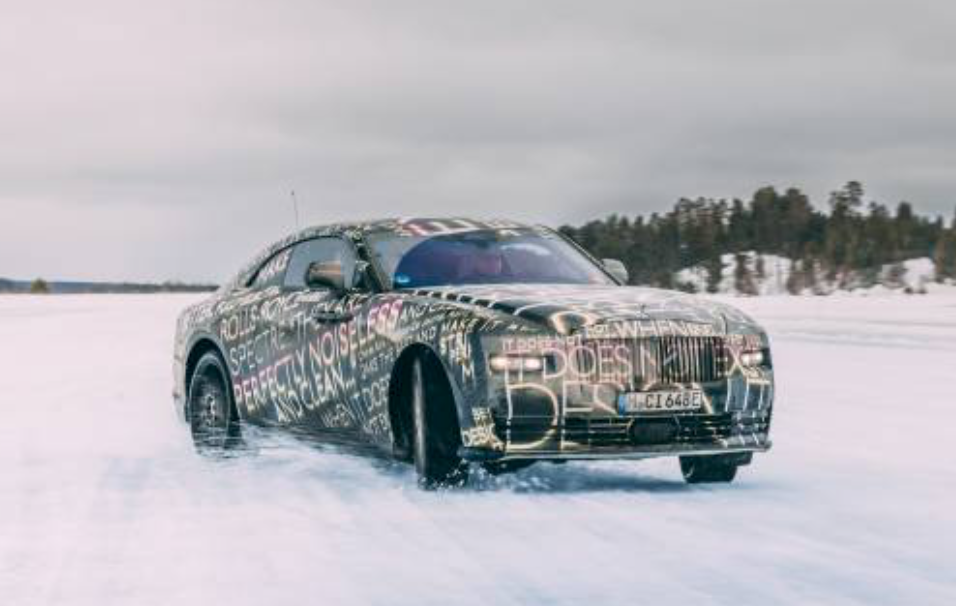 To prepare its launch at the end of next year, the all-electric Rolls-Royce Sceptre has undergone severe winter testing in the north of Sweden /Rolls-Royce

Rolls-Royce has completed its winter testing of the first electric model, the Spectre. About a quarter of the 2,5 million test kilometers planned for the battery-electric car has to be driven in (very) cold circumstances. The first rumors about the actual drive system are also popping up, like having four electromotors instead of the more usual two.

The winter testing took place in and around the BMW Group’s test center in Arjeplog, 55 kilometers from the Arctic Circle in the north of Sweden. BMW has also been testing the i7 over there, the iX5 Hydrogen, and the next generation electric Mini lately.

The more than 600 000 test kilometers for the Spectre were covered in temperatures as low as -26°C. The vehicles were also cooled down to 40 degrees below zero in climate chambers to test the battery management and durability of the systems.

By driving on low traction surfaces such as snow and ice and wilfully destabilizing Spectre, the engineers can create dynamic circumstances at low speeds that would ordinarily occur at high speeds. This can be reviewed and guided in situ and slow motion; in doing so, parametrizing and finessing cold-weather vehicle performance in areas such as handling, controllability, stability, predictability, and the ‘waft ability’ that, according to the company, defines the Rolls-Royce experience.

The accompanying press release stresses that many components are explicitly developed for Rolls-Royce. “Our task is to teach each component and system how to think, behave, and communicate like a Rolls-Royce, which sees much of the engineering pivot from workshops into the digital space,” says Mihiar Ayoubi, Director of Engineering, Rolls-Royce Motor Cars. “Here in Arjeplog, we have built a significant foundation on which we will create a true Rolls-Royce.”

“Refining the all-electric drivetrain that underpins Spectre challenges the very definition of engineering,” he continues. “The departure from internal combustion engines allows us to significantly increase the processing power of our individual components and create a Decentralised Intelligence. We refer to this unprecedented era, where we benefit from a multi-control, multi-channel, highly interconnected electronic and electric powertrain architecture, as ‘Rolls-Royce 3.0’.”

Rolls-Royce CEO Thorsten Müller-Ötvös calls the Spectre “the most anticipated product in the brand’s modern history”. “This is because it is much more than a product. It is a symbol for our bright, bold electric future, and it represents a seismic shift in our powertrain technology,” he said. The Spectre is scheduled for delivery in the fourth quarter of 2023.

That’s still one and a half years away, so BMW is not yet giving any technical details of the powertrain. However, Motor1 journalist Basem Wasef was on site at the test drives in Arjeplog. According to his report, the Spectre will have four electric motors, one for each wheel.

This is to support the revised rear-wheel steering system also aboard. To improve the cornering behavior of the electric coupé, exact control of the input on each wheel is crucial, and having a motor for each wheel is very convenient. Previously, the English car magazine Autocar had reported that Rolls-Royce would probably adopt the 455 kW electric drive of the BMW iX M60. However, the iX only has two motors.

Information about the size and the technology of the battery isn’t released either. However, in his report, Wasef talks about 1 500 pounds weight of the battery pack or more than 700 kilograms. This means that the new Spectre will definitely be a heavyweight, maybe even flirting with a gross weight of over three tons.