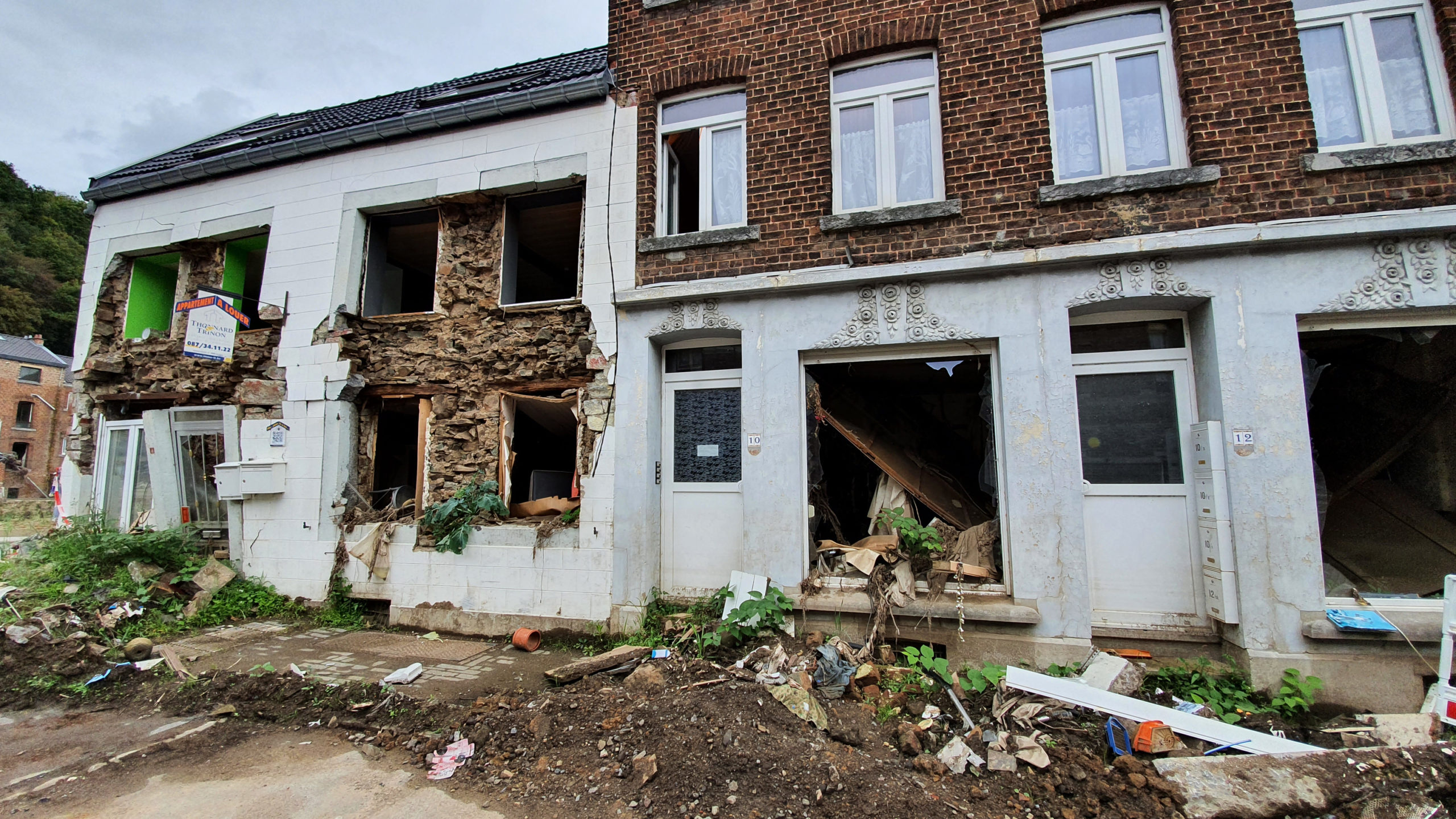 Many houses in the center of Pepinster were severely damaged after the floodings in July 2021. Extreme weather conditions and natural disasters are more and more frequent, and should be a ‘wake-up call’ /Belga

The chance that global warming remains limited to 1,5 degrees Celsius has pretty well gone by unless the world comes up with far more ambitious plans to reduce CO2 emissions. That is the devastating conclusion of the latest IPCC report.

The Intergovernmental Panel on Climate Change (IPCC) of the United Nations earlier warned that the impact of climate change is more severe than expected. Even when global warming would stop at 1,5 degrees Celsius.

Emission levels higher than ever

In 2015, the world’s leaders agreed on keeping global warming under 1,5°C compared to the pre-industrial times. Meanwhile, the temperature on earth already increased by 1,1°C on average. And this trend should be reversed: CO2 emissions should be halved by 2030. The final goal should be net-zero emissions by 2050.

According to the IPCC report, the average annual emissions of greenhouse gases between 2010 and 2019 were higher than in any other previous decade. There is still a large gap between the climate promises countries made and the policy they pursued.

In a reaction to the IPCC report, Antonio Guterres, secretary-general of the United Nations, lashed out at the political and business world, calling the report “a document of shame” and a “catalog of empty promises”, leading us to an “unlivable world”. He calls on the world population to take action and to require the introduction of renewable energy now. Rapidly and on a large scale.

However, limiting global warming to 2°C or even 1,5°C is still possible, the IPCC experts say. “But we need a far-reaching transformation, and fast, radical, and immediate CO2 emission reductions in the industry, the transport sector, and agriculture. The promises countries made until now are totally insufficient.”

Without radical actions, we’re heading for global warming of 3,2°C by 2100. An undesirable scenario, with more and more frequent natural disasters, extreme weather conditions, forest fires, melting polar caps, rising sea levels, and the extinction of numerous animal species. Phenomena that should be a wake-up call for us all, IPCC said earlier.

Nevertheless, there are several measures that can help reduce greenhouse gas emissions. According to the IPCC climate experts, we have to reduce the use of fossil fuels, accelerate the transition to renewable energy, and increase the energy efficiency in the industry. We have to go all out for electric transport and biofuels.

Forests and peatland should get better protection, emissions of methane and nitrous oxide should go down, and we shouldn’t waste so much food. The report also indicates the possibilities of renewable resources like bio textile or the use of wood for construction.

Focusing on the reduction of CO2 emissions in all scenarios will be crucial to reaching the net zero-emission level. The IPCC experts also point out the importance of global cooperation to achieve a successful climate policy.

However, scientists of the IPCC notice an increased readiness for climate action in policymakers and citizens. In the meantime, the good news is the spectacular price drop of sustainable energy sources like solar and wind energy, thanks to innovation and large-scale use. And politicians focus on energy savings in all sectors.

For Belgium, the situation is not too rosy. The annual CO2 emissions rise year after year while they should increase by more than 8% every year to limit global warming to 1,5°C. Emissions should go down rapidly, in all sectors, and all over the world. Belgium seems to lack ambition.

WWF Belgium calls Belgian authorities “to scale up existing solutions” and refers to an initiative of the business world, the Belgian Alliance for Climate Action (BACA), in which 96 companies participate. With the alliance, the companies confirm they, too, have a mission, and a part to play to achieve the targets of the Paris Climate Agreement.