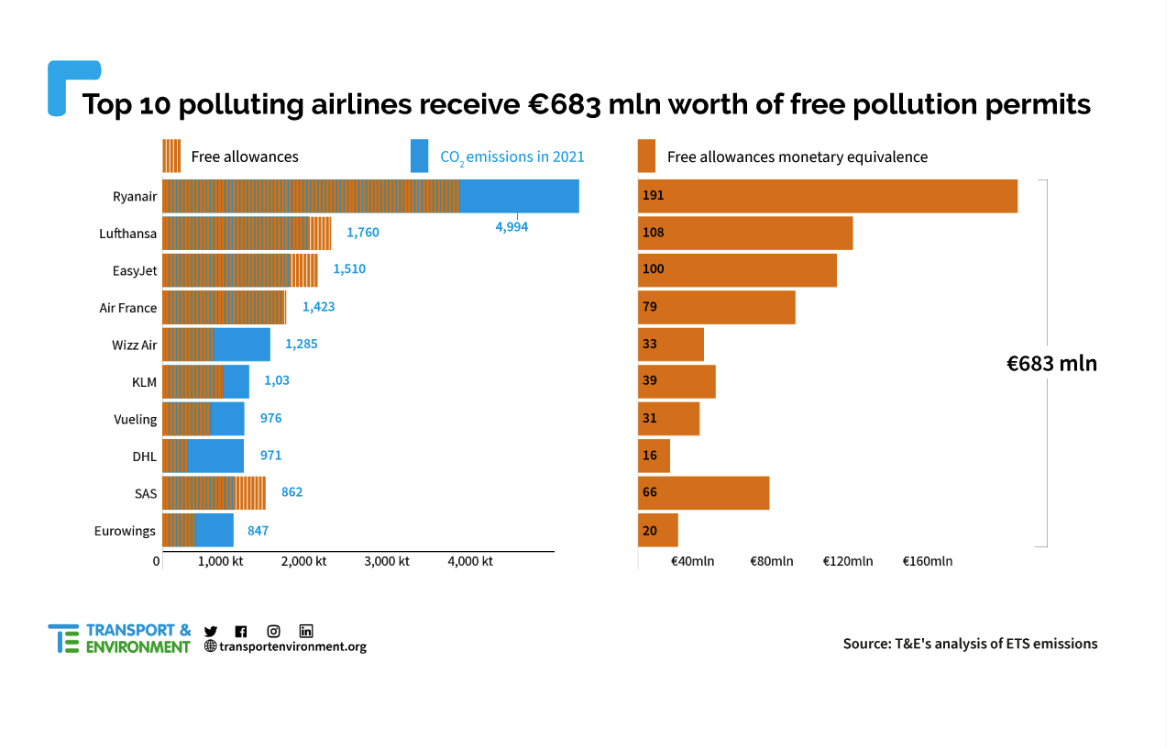 Up until corona times, aviation was the fastest-growing carbon polluter in the European Union. Still, it is one of the top receivers of free pollution permits relative to their emissions under the European Union Emissions Trading System (EU ETS in short). The EU ETS is a cornerstone of the EU’s policy to combat climate change and its essential tool for reducing greenhouse gas emissions cost-effectively.

According to new data analyzed by Transport & Environment (T&E), in 2021, the ten most polluting airlines operating in Europe received €683 million worth of free CO2 permits. Ryanair and Lufthansa received €191 and €108 million in free pollution permits, respectively; Easy-Jet sits in third place with €100 million in 2021, and Air France received €79 million.

Only flights within Europe

Airlines have to report their emissions from the previous year. However, for air transport, only emissions for flights within Europe must be registered. This leaves the bulk of emissions – more than 60% – for flights outside of Europe unaccounted for.

Airlines also have to communicate the number of allowances they receive for free. According to the EU ETS rules, they’re granted free carbon permits, which are gradually reduced over time. The European Commission claims this prevents carbon leakage, where European companies relocate to countries with less stringent climate standards.

Andrew Murphy, aviation director at T&E: “The EU claims to be a global leader in carbon markets, but for too long has left the bulk of its aviation emissions underpriced and oversubsidized.

As a result, the aviation industry has avoided paying its climate costs. These free allowances are a legacy that has no place, given the climate crisis we are facing. The EU needs to put an end to the get out of jail free cards for aviation.”

T&E’s analysis also shows that four of the ten most polluting airlines – Lufthansa, Easy-Jet, Air France, and SAS – received more polluting permits than the amount of CO2 they emitted last year. So they can keep hold of these permits and use them in the coming years. T&E calls to put an end to this practice.

‘Once in a lifetime opportunity’

Estimations indicate that the aviation sector in the 27 countries of the European Union emitted 28 million tons of CO2 in 2021. In comparison, last year’s emissions from all other means of transport totaled 1,34 billion tons of CO2.

“Although the industry has not fully recuperated from the pandemic slump, airline emissions figures are still way above where they should be. The EU’s climate packages for aviation are not stringent enough. The pandemic offered a once-in-a-lifetime opportunity to reduce the growth of the aviation sector and an incentive to build back green. But none of this has happened,” concluded Andrew Murphy.

T&E earlier called for binding measures to bring Europeʼs aviation industry in line with our climate goals. “Flying less will be critical,” the organization said.

“There is no justification for why airlines should be allowed to buy fossil jet fuel tax-free and why most of Europeʼs aviation emissions should be exempt from the EUʼs increasingly effective carbon pricing mechanism. Europe needs to end aviation’s outrageous tax exemptions and force the industry to pay the actual cost of its climate impact.”