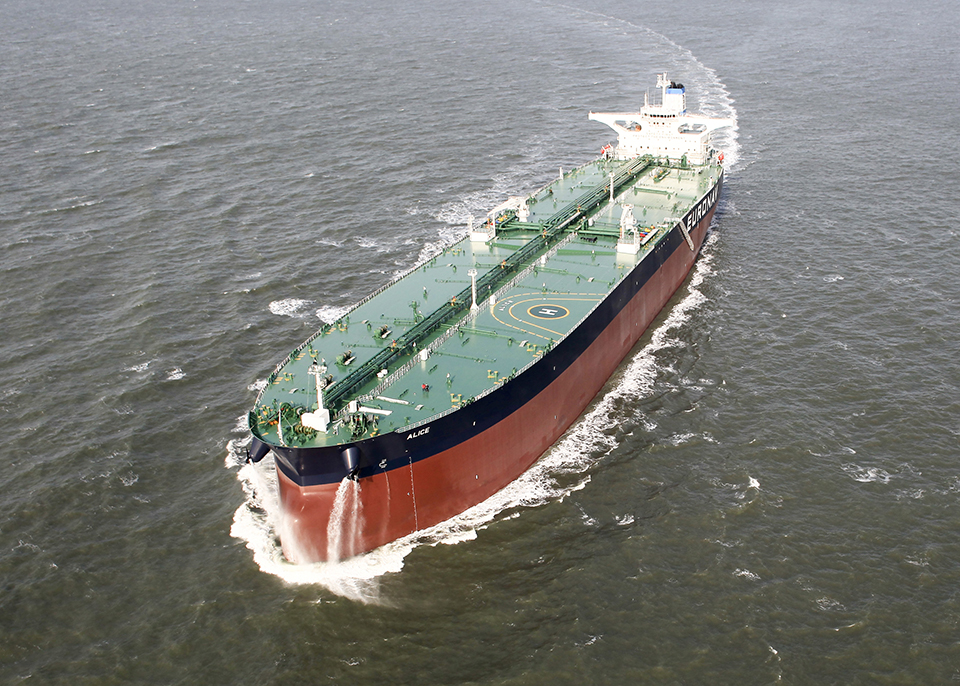 Alice, a 333-meter-long Very Large Crude Carrier with a deadweight of 299 320 DWT is just one of the 115 tankers of the combined fleet /Euronav

But after the news of negotiations starting broke last week, it suddenly became clear there’s a hitch with Euronav’s biggest shareholder, CMB, and the Saverys family. They question whether merging into a company focused entirely on oil transport is a good idea. They prefer a merger with CMB-Tech and a radically different course toward sustainable energy.

In the merger plan with the Norwegians, the name ‘Euronav’ would be disappearing as all ships will sail under the Frontline flag, but at the rudder of the new group, the Belgian CEO of Euronav, Hugo De Stoop, would be in charge from its Antwerp base. The fusion into a €3,85 billion company would be done entirely by exchanging shares.

A hitch with Saverys family

Both parties announced on Thursday negotiations are starting for the merger. Broadly speaking, they say there is a consensus Euronav shareholders will hold 51% of the new entity, those of Frontline the other 49%.

But that’s without reckoning with the Belgian Saverys family who has 13,22% of shares, the biggest package of shares in Euronav through CMB, and sees the Belgian tanker company as its own ‘baby’. In a press release, CMB questions the current strategy of Euronav’s management only focusing on the transport of crude oil in a world that needs a fast reduction of greenhouse gases.

A choice between new or old world

In interviews with De Tijd and De Standaard, Alexander Savereys, CEO of CMB says ‘selling out’ the company to the Norwegians is a bad idea. He wants Euronav to remain anchored in Belgium and to become a forerunner in greening the maritime sector by focussing on fuels of the future like ammonia and hydrogen.

The Saverys family thinks a fusion between CMB-Tech and Euronav to realize that, would be a clear choice for a green future instead of the ‘old world’ of oil. They want to convince a major part of the other shareholders at the general assembly in May to follow this ‘green course’. For the merger to become reality, 75% of the shareholders have to agree.

Today, both Euronav and Frontline have a ‘family background’, with the Saverys family in Belgium controlling Euronav’s ‘parent’ company CMB and John Fredriksen (78), who built up Norwegian Frontline from the ground up and now owns 40%.

Frederiksen is a self-made man, although he married a daughter of the wealthy Norwegian Astrup family. Earlier, he had already bought himself a stake of 9,8 percent in Euronav, his main competitor in Europe. He has two daughters who aren’t active in the business.

The Belgian Saverys family has a long history in shipping going back to shipbuilding with the (collapsed) Boel wharf in Temse, bulk shipping with CMB (Compagnie Maritime Belge), and gas tankers with Exmar, and oil tankers with Euronav. The latter slipped out of the family’s control when the Saveryes decided to sell their stake, but recently they came back via CMB, buying a share of 13,22%.

Although the oil tanker business doesn’t seem the most sustainable activity one can imagine, the Saverys family showed already lively interest in sustainable energy sources of the future.

Hydrogen instead of natural gas

Exmar, with Nicolas Saverys, who was CEO until 2020 and now the Executive Chairman, is a leading player in the transportation of liquefied gas products like LPG, butane, propane, and ammonia. Exmar is one of the pillars of the Belgian Hydrogen Import Coalition (HIC).

In a preliminary study, that coalition showed how shipping wind and solar energy from other sunny and windy parts of the world to Belgian ports is ‘feasible and cost-effective’. The idea is to use hydrogen carriers that are relatively easy to adapt to transport, like ammonia, methanol, and synthetic methane that is made with green hydrogen on location.

A vivid advocate of sustainable fuels

CMB (Companie Maritime Belge) was founded in 1895 as a shipping line linking Belgium and the then Belgian colony, Congo. It became a world player with more than 90 ships for dry bulk, container, and chemical shipping.

Through its CMB Tech branch, it is active in developing hydrogen combustion engines. CMB’s CEO, Alexander Savereys, is a vivid advocate of hydrogen as the fuel of the future in shipping.

In February 2020, CMB revealed its plans to have a first large container ship operational on hydrogen. In 2017 already, it launched the ‘Hydroville’, a hydrogen-driven ferry to transport CMB staff to and from the Antwerp harbor and avoid traffic jams this way. For Japan, CMB developed a ferry on hydrogen for 80 passengers.

Running on diesel and hydrogen

CMB presented a new engine developed together with Anglo Belgian Corporation (ABC) that can run on hydrogen and diesel simultaneously. A world’s first and ready to replace classic diesel engines in ships, trains, or UPS systems (Uninterruptible Power Supply) for hospitals or data centers.

Near the Port House on the Antwerp Eilandje, the CMB Tech daughter opened in June 2021 a multimodal hydrogen filling station on the border of the city and the port that can service both maritime and road transport.

The new top guy of the merged tanker fleet will be current Euronav CEO Hugo De Stoop (49), who told Gazet van Antwerpen he used to be a Greenpeace and WWF member in his student days and dreamed when graduating to do something in the sustainable energy sector…

According to the newspaper the then CEO of Exmar, Marc Saverys told him during a job interview that if he wanted to do something against this ‘polluting sector’ as a Greenpeace activist, he’d better do this from the inside. That was 18 years ago. Now it looks, according to the Saverys family in a reaction on the intended merger, he’s heading the other way.