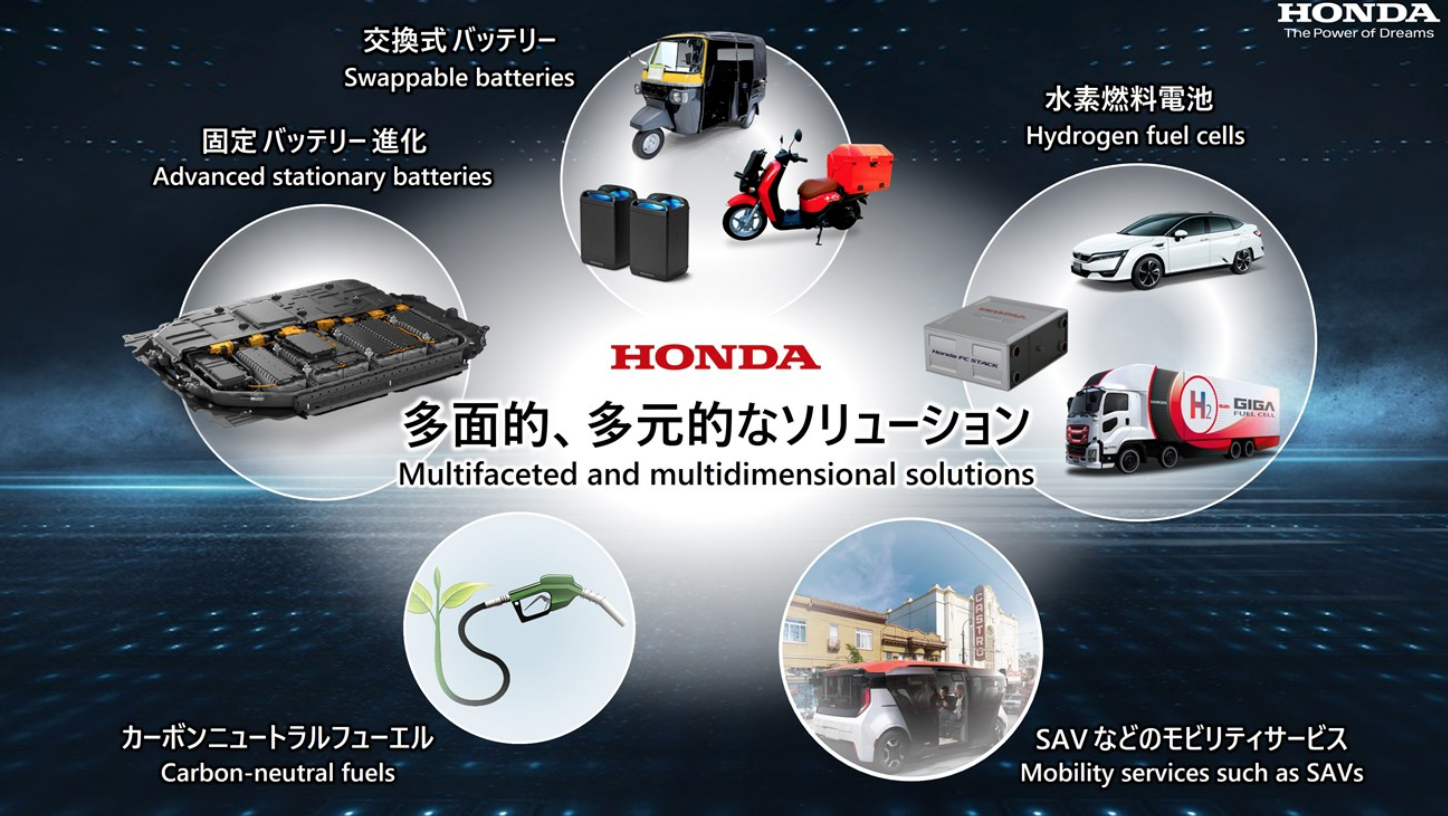 Honda will invest €37 billion in EVs before 2030, but is also open to all solutions helping to become carbon neutral in 2050 /Honda

Japanese car manufacturer Honda is investing €37 billion in developing and producing EVs. By 2030, it wants to have 30 EVs on offer, representing a total annual production of two million vehicles per year. Last year, the manufacturer announced that it would not sell ICE cars anymore as of 2040.

“Honda is striving to be a company, which serves as a source of ‘power’ that supports people worldwide who are trying to do things based on their own initiative and that helps people expand their own potential. To this end, Honda strives to realize ‘the joy and freedom of mobility’ by seeking a ‘zero environmental footprint’, says the press release.

“As the world’s largest power unit manufacturer with annual sales of approximately 30 million units of mobility products including motorcycles, automobiles, power products, outboard motors, and aircraft, we aim to realize carbon neutrality for all products and corporate activities Honda is involved in by 2050.”

“We will be striving to eliminate carbon emissions from power sources of various products. To this end, Honda believes that a multifaceted and multidimensional approach is needed, not a mere replacing of engines with batteries,” the announcement continues.

Including the utilization of swappable batteries and hydrogen and electrification of automobiles, Honda wants to offer various solutions for all of its mobility products according to how its customers use the products in various countries and regions.

Furthermore, with the connected platform, which connects all these elements, Honda will try to enhance the convenience and efficiency of society as a whole.

In the past, Honda divided its organization by products, namely motorcycles, automobiles, and power products. However, starting this fiscal year, technology areas that will become the core of the future competitiveness of Honda have been moved from their respective product-based organizations and combined under the newly created Business Development Operations.

Honda will ensure stable procurement of liquid lithium-ion batteries in each region by strengthening the external partnership. For example, in North America, it will work with GM, in China with CATL, and in Japan with Envision AESC.

From the second half of the 2020s, Honda will further accelerate its independent research and development of next-generation batteries. For the all-solid-state batteries it currently has under development, Honda decided to build a demonstration line to be operational in Spring 2024. Furthermore, Honda aims to adopt its next-generation batteries to models introduced to the market in the second half of the 2020s.

From now to 2025, Honda will introduce products tailored to the market characteristics of each region.

In 2026, Honda will begin adopting Honda e: Architecture, an EV platform that combines hardware and software. Through the alliance with GM, Honda plans to introduce affordable EVs in 2027, with a cost and range as competitive as gasoline-powered vehicles, starting from North America. 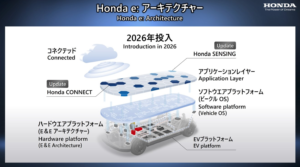 Through these initiatives, Honda plans to launch 30 EV models globally by 2030, with a full line-up from commercial-use mini-EVs to flagship-class models. Honda plans for a production volume of more than two million units annually.

In the next ten years, Honda will budget some €60 billion for its research and development expenses. Of all R&D areas, Honda is planning to invest approximately €37 billion in electrification and software. In addition, for the preparation for new growth, including new technology areas and resource circulation, Honda will invest approximately €8 billion over the next ten years.

Nevertheless, Honda still has a noticeable parenthesis: “While taking on challenges toward carbon neutrality and electrification, Honda always has a passion for offering FUN to its customers. The ‘joy of driving’ will be passed on to our models even in electrification, and Honda will globally introduce two sports models, a specialty and a flagship model, which will embody Honda’s universal sports mindset and distinctive characteristics.”