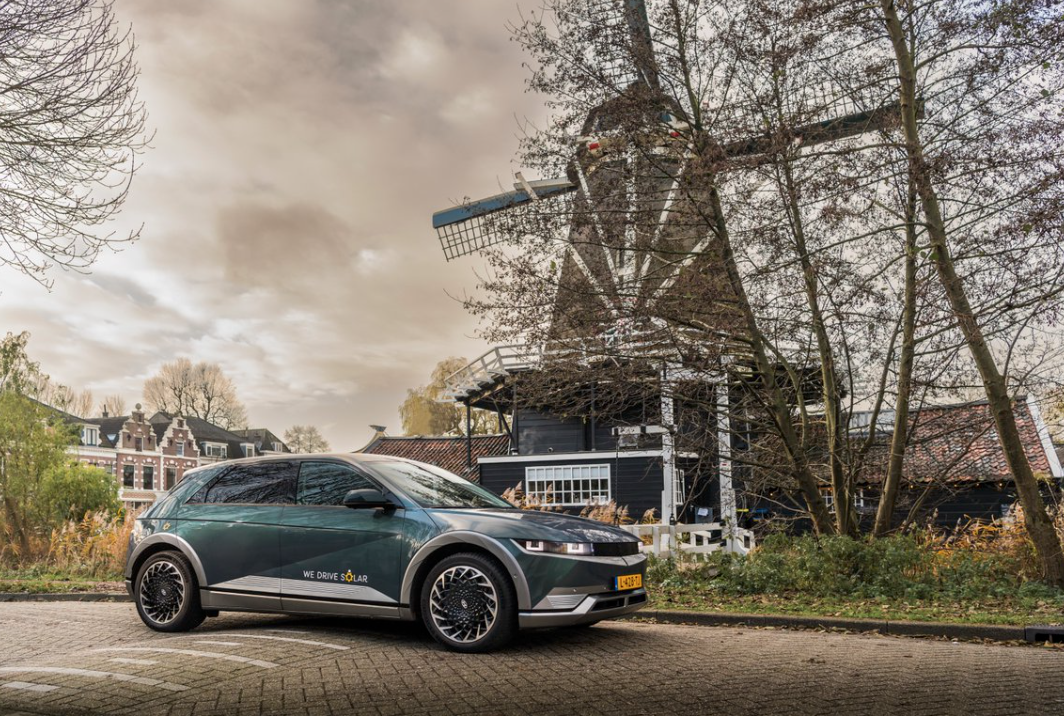 25 Hyundai Ioniq 5 cars are used for car-sharing in Utrecht by ‘We Drive Solar’. The plan is to integrate them in a V2G system soon /We Drive Solar

Hyundai plans to make the onboard charger from the Ioniq 5 suitable for bidirectional charging, enabling V2G (Vehicle-to-Grid) technology. In addition, Hyundai will soon introduce a new electric model equipped with V2G technology from the beginning.

The new vehicle is probably the Ioniq 6, which will be presented soon. The electric sedan will be the second Hyundai model based on the company’s own E-GMP platform, following the Ioniq 5 crossover.

Hyundai’s onboard charger for this platform is V2X-capable, which stands for ‘Vehicle-to-Everything’. So far, Hyundai has only used this technology for a ‘vehicle-to-Load’ (V2L) function. Electrical devices up to 3,6 kW can be operated via a special adapter as if they were plugged into a socket.

Expanding the possibilities of V2X

Hyundai is now expanding its V2X possibilities. Right now, they are still limited within the framework of pilot projects. Hyundai is currently using modified Ioniq 5 cars for this purpose. In Germany, for example, Hyundai is part of the ‘Vehicle-to-Home’ (V2H) project CRADLE (Center for Robotic-Augmented Design in Living Experiences) in Berlin.

The latter tests the possibility of sharing electricity within a closed energy system with the home. Here, several Ioniq 5 cars are in use, and they have the same onboard charger as the series models in terms of hardware. For the project, however, specific software was installed.

In Utrecht, the Netherlands, 25 Ioniq 5s are on the road as car-sharing cars for the mobility provider ‘We Drive Solar‘. The vehicles are offered to the residents of a recently built housing estate as an alternative to owning a car. Currently, the vehicles are still charged conventionally. Later, the Ioniq 5 modified for the V2G test will be charged via a public charging point developed by We Drive Solar.

Hyundai says that the familiar ‘vehicle-to-load’ function and the new V2G are technically related but work with different software solutions. “For the exchange of energy with the power grid in V2G, a communication protocol must first be defined between the BEV and the grid,” the Koreans write. However, since this is software, vehicles that have already been delivered can also be made usable for V2G technology using an update.

The benefits of V2G

V2G benefits BEV owners, the grid, and the environment as a convenient and cost-efficient way to store and share energy locally. When V2G technology balances the grid, everyone benefits. During high-peak times when large amounts of energy are drawn from the grid, BEVs can return power to the local infrastructure and help to even out the demand. Owners can then recharge their BEVs at a lower cost during off-peak hours.

According to business models currently under review, users can provide energy from their BEVs into the grid. Because grid services are used more efficiently, V2G saves operating electricity systems, which are then passed on to the user.

The implementation of V2G technology also accelerates the decarbonization of the power system. Electricity generated from renewable energy sources, such as solar or wind, can be stored in BEVs. Overall, this will reduce carbon dioxide emissions from the power system to lessen the dependence on fossil fuels.

Other applications of V2X

However, BEVs are not limited to pushing energy to the grid; they can also power homes and buildings. Therefore, V2X is the umbrella term used to describe the additional value of BEVs during times of non-use, including V2G and other use cases.

In a closed electric ecosystem, separate from the grid, a BEV can power the home (V2H) to reduce the local grid’s household energy bill and demand. In ‘Vehicle-to-Building’ (V2B), energy stored in BEVs can be used to power an entire building, for example, an office building.