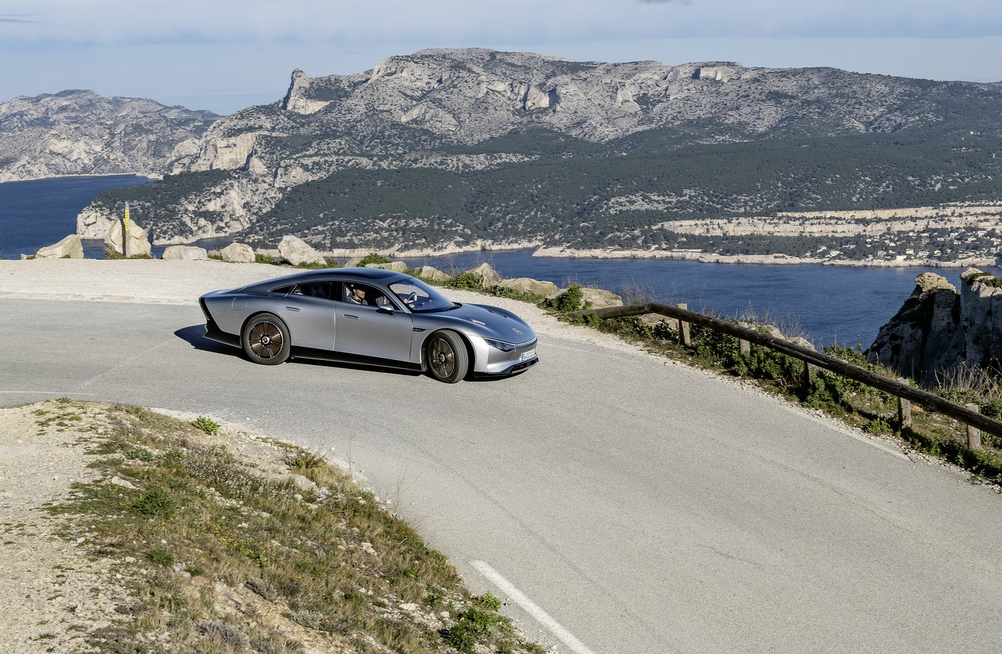 During a trip from Stuttgart to the Cote d’Azur, the Mercedes Vision EQXX drove more than 1 000 km on one battery charge at an average of 8,7 kWh per 100 km /Mercedes-Benz

The Mercedes Vision EQXX prototype for the electric sedan of the future has recently proven its 1 000 km + range in real driving conditions. After a 1 008 km long drive from the research center in Sindelfingen (Stuttgart) to Cassis (French riviera), the car had some 140 km range left.

Driving from Germany to the Mediterranean made the prototype encounter different route profiles, temperatures, and gradients. The Swiss Alps, among other denivelations, had to be crossed. Nevertheless, the super-efficient EV  has consumed 8,7 kWh/100 km on average, proving “that consumption of around 10 kWh/100 km in day to day driving is realistic for a series EV in the near future,” Mercedes proudly announces.

The journey started in cold and rainy conditions. It was undertaken at regular road speeds, including prolonged fast-lane cruising at up to 140 kph on the German autobahn and near the speed limit elsewhere. On arrival, the battery’s state of charge was around 15 %, amounting to a remaining range of about 140 kilometers. The whole trip was covered in less than 12 hours of driving at an average speed of 87,4 kph.

The Vision EQXX has thus taken electric vehicle efficiency to a new level, in real-life conditions, and with independent proof. The long-distance drive was completed with the charging socket sealed and accompanied by an independent expert from the German certification body TÜV Süd.

“We did it! Powering through more than 1 000 kilometers with ease on a single battery charge and consumption of only 8,7 kWh/100 km in real-world traffic conditions. The Vision EQXX is the most efficient Mercedes ever built. The technology program behind it marks a milestone in developing electric vehicles. It underpins our strategic aim to ‘Lead in Electric’,” says Ola Källenius, Chairman of the Board of Management of Mercedes-Benz Group AG.

What makes this prototype unique? Its combination of talents to go for the lowest energy consumption possible. The Vision EQXX is very aerodynamic (Cx = 0,17), it recuperates a lot of energy, it has a compact battery with higher density and lower weight (495 kg in total), there are solar panels on board, it has a light structure (1 755 kg for a 5-meter car, batteries included) and a very efficient transmission system (95% average efficiency), and it is equipped with tires with an extremely low rolling resistance fitted on lightweight magnesium wheels.

According to the Mercedes engineers, the same car equipped with a most frugal internal combustion engine would have consumed 3 to 4 liter petrol per 100 km. “The electricity consumed is the equivalent of approximately 1 liter of petrol consumption,” a Mercedes technician adds.

The car’s remarkable efficiency is due to different factors, says Mercedes. Although a roomy sedan, the car has been developed to weigh as little as possible, have very low drag, and be very efficient. That goes for the energy transmission but also the new type of batteries.

Mercedes is not very communicative about the type of battery used; it only says it uses the chemistry of the next generation, foreseen to feature in production cars as of 2024. The battery and drivetrain also have ‘passive cooling’, via an innovative cooling plate in the underbody that makes a genuine cooling system redundant. The battery has a high energy density of 400 Wh/l and an operating voltage of more than 900 volts.

Road to the future

Actual EV production cars having the same size as the Vision EQXX are, for example, the Tesla Model S  and Mercedes’ own recently launched EQS. The latter has a WLTP consumption of 16-17 kWh/100 km electricity, providing a theoretical range of 780 km in ideal conditions. However, actual day-to-day driving proves that a realistic range lies between 500 and 600 km.

The Tesla Model S has a WLTP electricity consumption figure of around 15 kWh/100 km and boasts a range of 650 km. In realistic everyday driving, one also has to count on a good 500 km, depending on weather and driving conditions.

For sure, the next generation of EVs will be lighter, roomier, and more fuel-efficient. The Vision EQXX prototype of Mercedes-Benz is one of the first to show what can be possible in real life. We’re anxious to see what will be coming to us as real production cars. And at what financial expense…