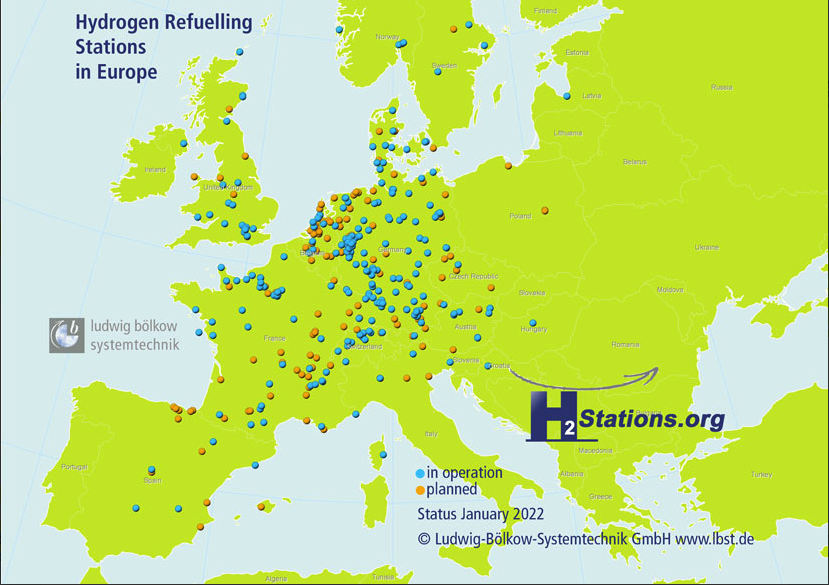 H2stations.org keeps track of the hydrogen filling infrastructure developing over the whole of Europe. Spain is trying to catch up now /H2stations.org

Spain is gearing up its efforts in hydrogen as a sustainable alternative to oil in the northern part of the country, spanning from the Basque Country over Navarra and Aragon to Catalonia. Beginning of this month, it announced the creation of the ‘Ebro Hydrogen Corridor’, with a network of 20 hydrogen filling stations by 2025 to be expanded to 100 by 2030.

The Ebro Hydrogen Corridor is a project that builds further onto the regional initiatives already underway in northeastern Spain. The driver behind the creation of this consortium is SHYNE (Spanish Hydrogen Network), the largest multisectoral renewable hydrogen consortium in Spain, launched last January.

In this project, the lead is taken by Spain’s most prominent energy (oil and gas) and petrochemical company based in Madrid, employing some 24 000 people worldwide. Repsol’s Hydrogen Director, Tomás Malango, is also Chairman of SHYNE.

According to the agreement, SHYNE will deploy projects in ten autonomous communities in Spain and have a total investment of €3,23 billion to develop more competitive technologies and evolve the Spanish industry and its infrastructures toward decarbonization, generating some 13 000 jobs.

Europe had 228 hydrogen stations at the end of last year, 101 of which are in Germany, according to H2stations.org. The latter is an information service by the German system technic bureau LBST. It keeps an online map and database of the growing hydrogen infrastructure.

France is second in Europe with 41 operating stations, followed by the UK with 19, Switzerland with 12, and the Netherlands with 11 stations. Spain only has six operational for the time being.

Worldwide filling up with hydrogen is possible in 33 countries, with 685 hydrogen refueling stations operational. In addition, there are concrete plans for 252 additional refueling station locations, of which a number were announced in Spain for specific areas for the first time.