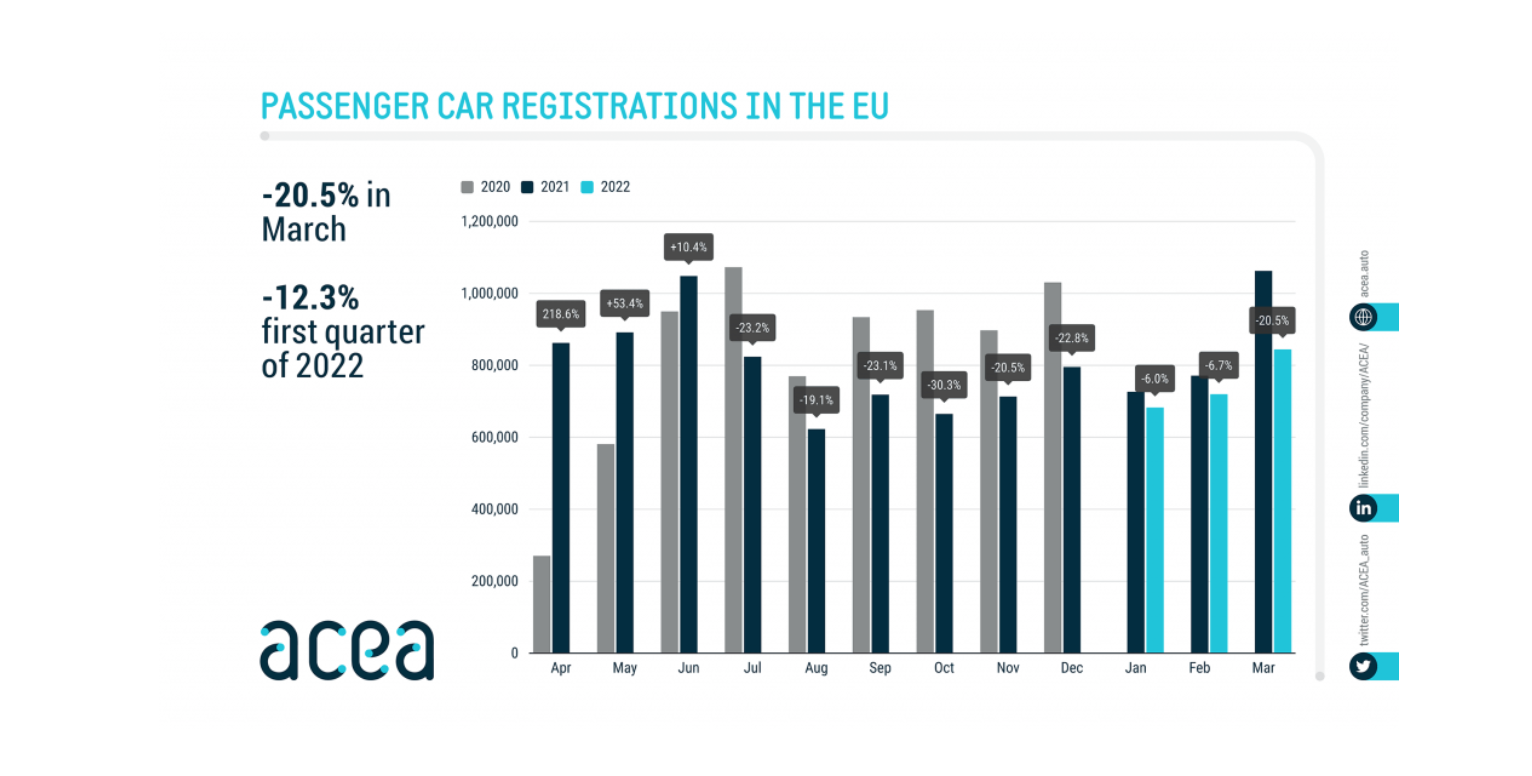 Sales figures are declining all over Europe, ACEA’s statistics confirm. The record low sales are due to the war in Ukraine and the persisting shortage of semiconductors /ACEA

During the first quarter of 2022, 103 146 new cars were registered in Belgium, 13,5% less than in 2021. The same pattern can be seen all over Europe, confirmed by the new figures we received from ACEA.

Everybody is still pointing at the delivery problems worldwide, mostly due to the persisting problems with the production of semiconductors worldwide. And, of course, the Ukrainian war is not doing any good either.

According to the statistics of the European car manufacturers association ACEA, passenger car registrations in March 22 in the European Union continued to decline (-20.5%), with 844 187 units sold. The ongoing supply chain disruptions, further exacerbated by Russia’s invasion of Ukraine, negatively affected car production.

As a result, most countries in the region recorded double-digit drops in sales, including the four key markets: Spain (-30,2%), Italy (-29,7%), France (-19,5%), and Germany (-17,5%). According to the French car association Plate-forme Automobile, this is one of the lowest figures in recent history.

The month of March was even worse than the first quarter (with 36 998 vehicles) because there were 17,7% fewer registrations than last year. The car and two-wheeler federation Febiac finds the causes for this drawback in the continuing shortage of semiconductors and the uncertainty about the Russian-Ukrainian conflict.

Febiac points out that the orders for new cars are a lot healthier, but delivery problems remain. Secondly, the federation sees a clear difference between the individual buyer and the professional market. The market of individual buyers shrunk by 26,6 in Q1 of 2022, and the fleet market (company cars, etc.) was almost on par (-1,9%) with Q1 in 2021.

Other categories of vehicles

In the top 5, BMW is still the brand to beat. Although it also regressed by 20,6% in March and 23,2% for the first quarter, it stays number one, followed by Peugeot, Volkswagen, Mercedes, and Audi (the sole climber in this top 5). Figures that are again stressing the ever-growing importance of the premium brands in a Belgian market dominated by sales to companies and independents.

When we consider the energy source, we see that fossil fuels are losing terrain. Already 42,4% of the newly registered cars are electrified. This figure can be divided into 17,9% HEVs (all sorts of hybrid cars, mid hybrids included), 15,4% PHEVs (plug-in hybrids), and 9,1% full electrical vehicles (BEVs mostly).

Considering the total car market in Belgium, we now see that petrol-fueled cars are seriously in the lead, representing 52,1% of all cars registered in the country. The share of diesel cars has further declined to 40,7%, while alternative drives are gaining terrain.

The German market follows the same pattern. After a slightly positive start, March has registered 241 330 new cars, a 17,5% decline compared to last year. For the first quarter, this means a decrease of 4,6% compared to Q1 in 2021.

As a consequence of the war in Ukraine and the persisting production problems regarding semiconductors, the German federation of car manufacturers (VDA) has reviewed its production forecasts for 2022. After a regress of domestic production by 29% in March, VDA now settles for 3,3 million units produced.

This is still 7% more than in the disastrous year 2021, but the earlier forecast previewed 13%. In their factories abroad, the German manufacturers plan to produce 2% more cars than last year, a forecast that has also been revised from 5% previously.

The same tendencies are to be seen all over Europe. For sure, the Ukrainian conflict has an influence here and the enduring problem of semiconductors shortage, as already said. However, we also note that individual car buyers are more prudent and eventually postpone their purchase if they are not waiting for a car that fails to be delivered.