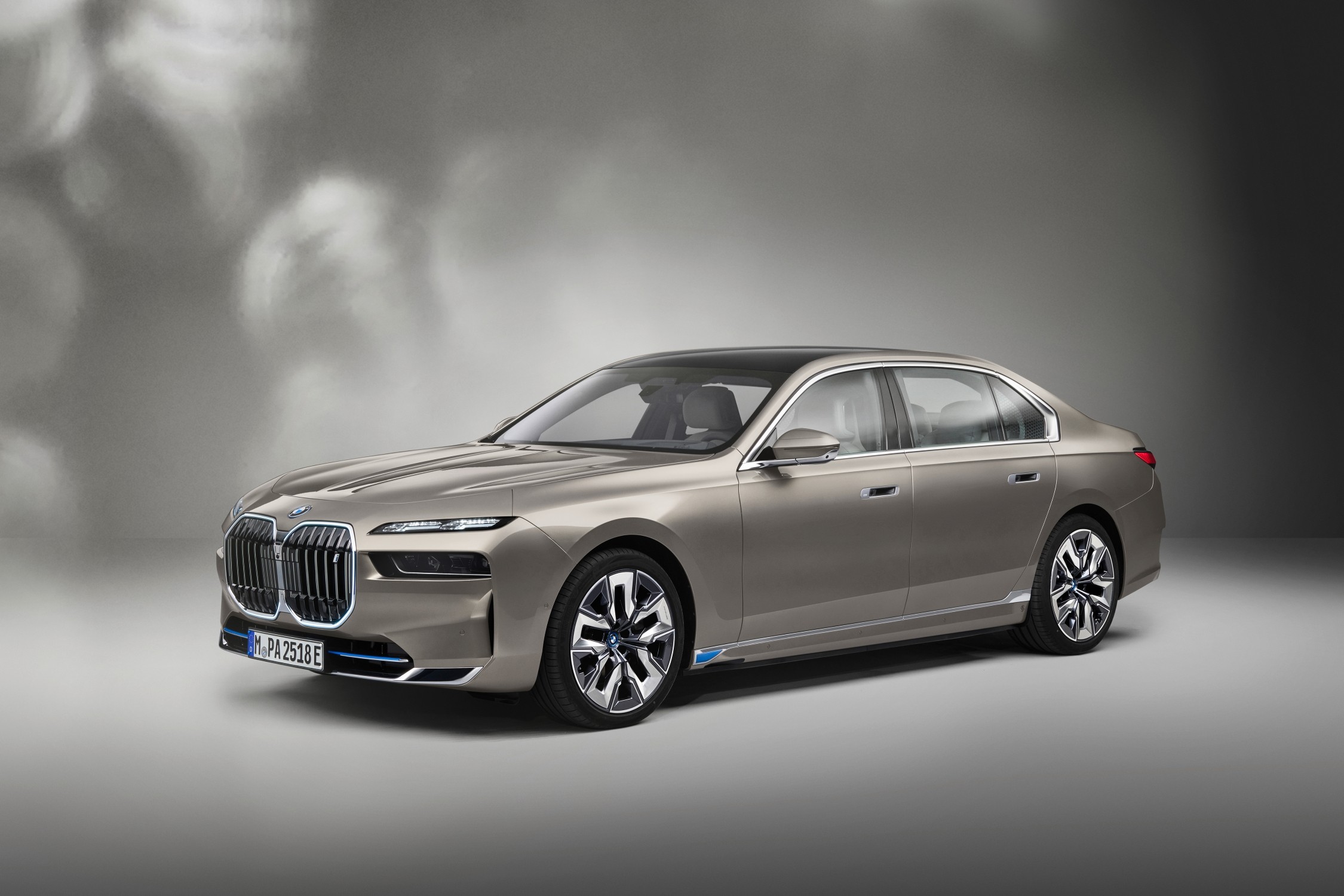 Initially, the basic fully electric version of the new BMW 7 Series will be the only available in Europe. Later comes a stronger top version and a PHEV variant /BMW

BMW has presented the new generation of the 7 Series, for the first time also in a fully electric version i7. BMW sees this generation change as a “redefinition of luxury”. When one looks at the technical information, the i7 seems to be the top model of the entire series. For Europe, only electrified models seem to be going on sale.

For its new flagship, BMW has followed a different strategy compared to its big competitor from Stuttgart.  Mercedes-Benz separated the S-Class and EQS to build the electric sedan on an uncompromising electric platform. BMW remains truly focused on a flexible platform, even in the luxury segment. So, the i7 is part of the all-new 7 Series. They share not only a platform but also many design and tech elements.

A new definition of luxury

“The all-electric luxury sedan i7 is a fully integrated member of the model family and clearly demonstrates how an exclusive driving experience and the ultimate feeling of onboard wellbeing can be combined with an unwavering commitment to sustainability,” BMW says in its press release.

“The generation change at the pinnacle of BMW’s model range is wrapped up in a new definition of luxury that focuses on the individual’s personal attitudes, needs, and emotions.”

In BMW’s philosophy, the new BMW platform must also be able to accommodate petrol, diesel, and a plug-in hybrid drive. BMW always says that the customer should decide. Designwise, it ensures that the i7 has classic saloon proportions: a long front bonnet with enough room for internal combustion engines and not only more compact electric motors.

Like the other recent BEVs from BMW, the i7 uses the electric drive system of the fifth generation. This means using current-excited synchronous motors that can be combined in different positions (front and rear or both) with varying formats of battery.

The battery pack capacity in this big sedan is 101,7 kWh. The system delivers a torque of 745 Nm, together with the 400 kW of total power output; a sprint from 0 to 100 kph is possible in less than 5 seconds (4,7, to be precise). There’s an electronically controlled top speed of 240 kph.

But pure acceleration, rarely a problem in fully electric cars, wasn’t the main focus of the BMW engineers. Instead, they were more interested in excellent traction and driving stability. The fully variable all-wheel drive, electronically monitored, ensures safe driving behavior in all conditions, even the worst, says BMW.

With a WLTP consumption of between 18,4 and 19,6 kWh/100km (depending on equipment), a range of  590 to 625 kilometers is possible in the i7 xDrive60. The adaptive recuperation system has been further developed to also contribute to this. In the i7,  the system reacts not only to bends and other vehicles but also to traffic lights, for example.

Next year, the absolute top model will be introduced, the i7 M70 xDrive. It will have an output of 485 kW, a maximum torque of more than 1,000 Nm, and can accelerate to 100 km/h in 4.0 seconds, according to provisional figures based on the current state of development. The current WLTP consumption lies between 21,2 to 26,4 kWh/100 km.

In the USA, China, and ‘other selected sales regions’, two 6-cylinder petrol engines and 48-volt hybrids will be offered alongside the i7 at the start of sales, the 735i and 740i. The first has 272 hp, the latter 380 hp. Later, there will also be a 760i xDrive with a 4,4 liter V8 developing 544 hp. This one won’t be coming to Europe either, having performance figures very similar to the PHEV-variant at a much higher fuel consumption (if the PHEV is properly used, of course).

Since both i7 derivatives use the same battery with 101,7 kWh net capacity, the charging behavior is the same for both models: AC is charged with a maximum of 11 kW, and DC is up to 195 kW. The high-voltage storage system has its own 5,5 kW flow heater to bring the battery into the optimal temperature window before fast charging, which can also be activated manually.

Cooling rather than heating is usually required during the fast charging process itself. Here, the operating strategy has been optimized to prevent ‘overcooling’. Too low temperatures should be prevented, especially during high charging states – which results in better charging performance and reduced aging of the cells.

The i7 being on a ‘multi-purpose’ platform, the car has less the stance of a fully electric car with a dedicated platform. In other respects, the opposite is true, like retractable door handles, which are also available for the combustion engine.

An extended version with a stretched wheelbase, which used to be common for luxury sedans of this kind, is also history at BMW. In the i7, the large battery requires a lot of installation length between the axles, so the new 7 always has a long wheelbase of 3,22 meters.

This long wheelbase and a slightly wider track also contribute to comfort. Also, BMW has fitted rear-wheel steering for maneuverability, which should reduce the turning circle by 0.8 meters. An adaptive two-axle air suspension with electronically controlled dampers is standard. On the i7, the bi-directional hydraulic bearings on the rear axle are said to increase ride comfort.

With a total length of 5,39 meters, the new seven has not only increased in length by 13 centimeters, but it has also become 5.1 centimeters taller. The result is a limousine where the proportions remain intact, as is the general look. The future will tell us if this was a good move to convince a wealthy and sometimes rather conservative clientele.

The luggage compartment volume of the i7 is 500 liters, around 40 liters less than that of the ICE cars. The maximum towing capacity for the 7-series has been generally stated by BMW as up to 2,1 tonnes, without mentioning any drive variant.

The rear view is characterized by horizontal lines; the LED lights extend far into the side sections – as is familiar from other BMW vehicles. At the front, BMW has opted for two-part front lights: daytime running lights and turn signals are forming one unit, and the main headlights sit below.

Also, in the interior, the i7 looks somewhat more conventional than, for example, a  Mercedes EQS with the Hyperscreen dashboard. Of course, BMW also relies on digitalization and installs large touchscreens. The highlight is undoubtedly the 31-inch 8K monitor ‘BMW Theatre Screen’, which can swivel out of the roof and is intended to create a cinema atmosphere in the rear seat.

In the front, despite the touchscreen with BMW.OS8 operating system, there is still the familiar BMW rotary-push control (iDrive) and also conventional steering wheel buttons, whereas others rely on touch-sensitive surfaces. From our own experience, we know that a touch more conservatism can give excellent results here. 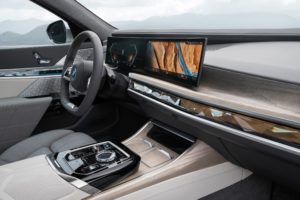 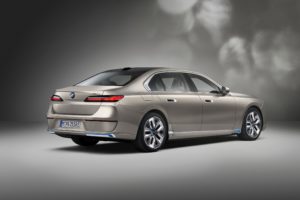 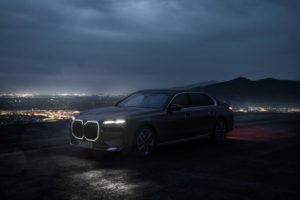 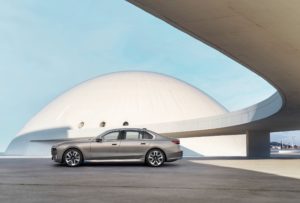 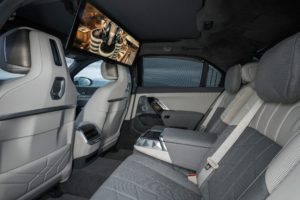