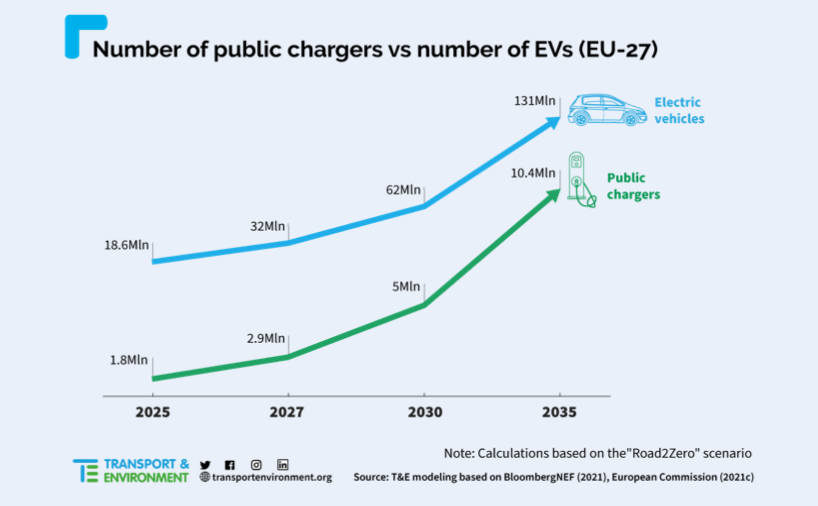 According to T&E’s calculations some 10,4 million public chargers will be needed for 131 million EVs in Europe by 2035. /T&E

Brussels-based NGO Transport & Environment states in a new analysis report that the charging infrastructure in Europe will keep pace with the uptake of electric vehicles by 2035, when the combustion engine would be banned.

T&E forecasts 10,4 million public chargers for 131 million EVs in Europe by 2035. It counters the persistent warnings by the manufacturers that there will not be sufficient public charging capacity to ‘feed’ the expected fleet of EVs. It even warns that too many chargers would jeopardize the providers’ business model, as most of the charging will be done at home or work.

The T&E analysis shows that between 3,6 and 5,1 million chargers will need to be deployed across Europe by 2030. That’s the year several EU countries would like to see sales of new ICE cars banned, including PHEVs. Others would prefer to postpone to 2040 or leave a loophole for plug-in hybrids after 2035.

So far, the EU Commission has put forward 2035 as the optional end date. The draft law, says T&E, “obliges member states always to ensure there is a public charging network that is sufficient to fulfill the charging needs of their respective EV fleets.”

To calculate how many chargers that means, the EU uses a ʻfleet based targetʼ – requiring at least 1 kW of public charging power to be available per BEV – that increases in line with EVs registered in a country.

Further are taken into account the share of public chargers versus private charging at the home or work, the average time spent at a charger by an EV driver, and the power consumption of future EVs.

Only 30% of public charging

T&E says public charging will only be around 30%, as charging at home or work will be the most convenient and the cheapest. The ‘utilization rate’ of the public charging network should be between 8,6 and 12,5% daily to have a livable business case for the suppliers of the chargers. Too many chargers would mean less utilization per charger and undermine that business model.

And then there is the average consumption of the electric car, which still is around 20 kWh/100 km today with powerful premium cars, but should go down with technical improvement. T&E points at Mercedes-Benz’s Vision EQXX concept car with a consumption of around 10 kWh/100 km.

For its analysis, T&E assumes “a moderately conservative efficiency of 14.8 kWh/100km” in its analysis. It says that’s moderate as today VW claims that the ID.3 – representative of an average electric car, along with the Tesla Model 3 – consumes only 13.7 kWh/100 km under ideal test driving conditions (WLTP).

“The very regulatory design (or the fleet-based kW targets) ensures that the deployment of chargers in each member state will always follow the uptake of EVs,” T&E claims. It points to the figures from 2018 to date to show charging infrastructure (340 000 chargers) is ramping up already with the uptake of EVs (3,8 million) in 2021. 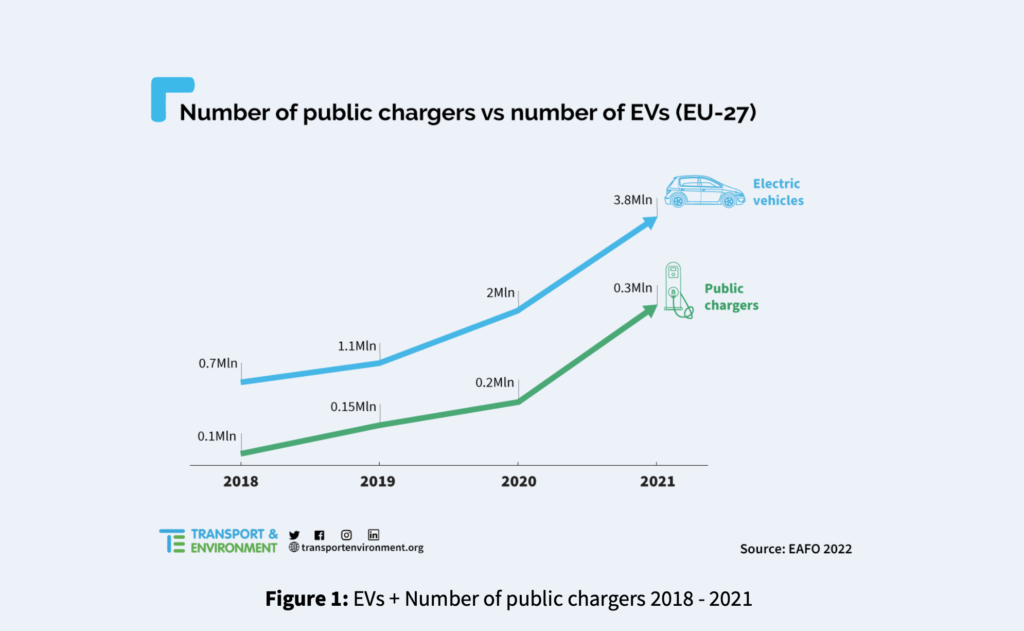 The actual number of chargers depends mainly on the ratio between ‘normal’ chargers under 22 kW and ‘fast chargers’ from 22 kW to 350 kW today. EV drivers spend far less time at a fast charger so that they can serve more EVs daily. For its calculations, T&E used a 50/50 ratio between normal and fast.

The car manufacturers themselves use a much stricter scenario to calculate the estimated charging network infrastructure needed. That would mean between 9,8 and 14,4 million chargers by 2030, increasing to between 24,6 and 31 million chargers in 2035.

To many chargers means subsidizing

According to T&E, ACEA starts with the assumption that 3 kW per BEV will be needed until 2030, three times more than the EU uses as a base. That would lower to 1 kW per BEV once the share of EVs in the European car fleet reaches 7,5%. And it takes an efficiency of 20 kWh/100 km until 2030 into account as a base, “which seems quite implausible and questionable,” adds T&E.

“While more public chargers might be appealing at first glance, the concerns with these high numbers are manifold. It would result in low utilization rates – below 5% – meaning the public charging infrastructure would need to be continuously subsidized,” T&E concludes.