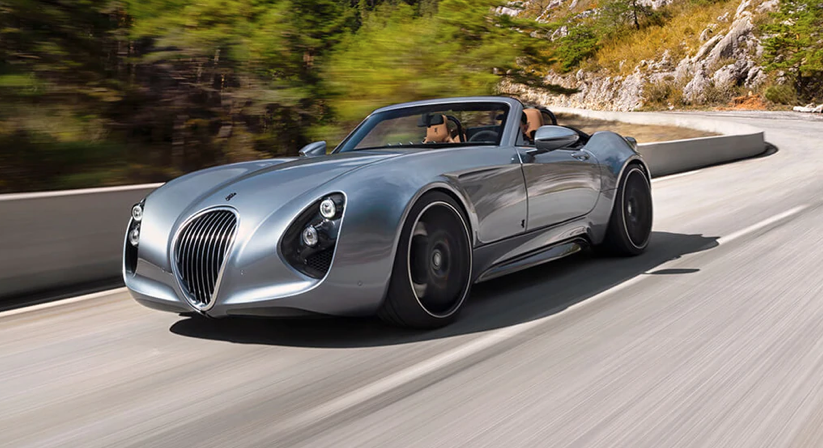 After a break, Wiesmann is back with this 100% electric roadster, the Thunderball /Wiesmann

Wiesmann is a small and eccentric German manufacturer that builds refined and British-looking roadsters and relies on proven BMW engines for its drive. However, the manufacturer is switching to an electric Thunderball model that combines classic looks with a super-modern electric drive.

The German manufacturer disappeared from the market for a while but seemed to have found a second breath with a new electric-powered version of the classic roadster paradigm.

The Thunderball cuts the link with BMW because there is no longer a six-in-line or an even bigger V8 gasoline engine under the hood. In its stead is a frunk (125 liters) so that the Wiesmann can finally carry luggage.

The additional trunk takes up another 180 liters of cargo space at the back. The classic powertrain in the front is replaced by two electric motors that directly drive the rear axle.

Two e-motors on the rear axle

Both electric motors draw their energy from a battery (mounted centrally underneath) with a voltage of 800 Volts and a storage capacity of 92 kW, of which 90% can be used net.

The drive system offers 500 kW (680 hp) and an impressive 1 100 Nm of torque. All this is combined with classic rear-wheel drive, which makes it evident that this roadster will require a skilled touch from its driver, but it will also be provided with the necessary driving aids.

Wiesmann also kept an eye on the weight by making as many components as possible from lightweight materials (aluminum and carbon). However, the ample battery means the roadster still weighs 1 775 kg.

The announced performance doesn’t seem to suffer from the mass and leaves little to the imagination. For example, a sprint from 0 to 100 km/hour would be possible in less than three seconds, and with a regular driving style, an autonomy of 500 km would be achievable.