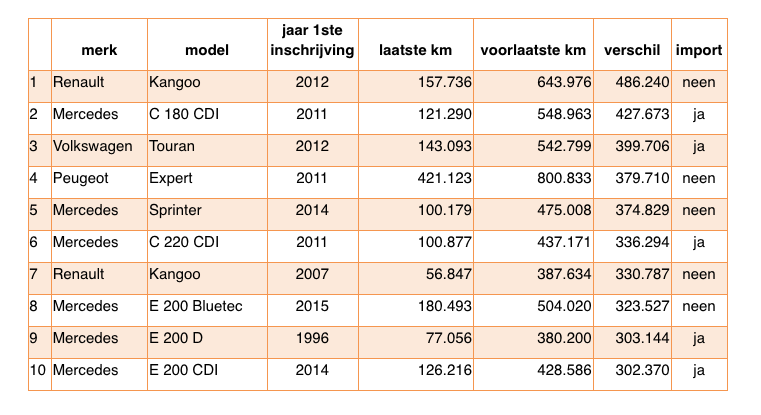 Car Pass harvests spectacular figures from relatively old (and cheap) vehicles, although the fraud, expressed in euros, is much more significant for young vehicles /Car Pass

The annual report of Car Pass, the organization that has been charting odometer fraud for 15 years, reveals that in the past year 1 578 cases of odometer fraud were detected in Belgium. The biggest problem is still with vehicles that come from abroad, there is even a 2% increase in the number of fraud cases compared to 2019.

Of the 1 578 cases where the odometer was manipulated, 906 (0,13%) involved Belgian vehicles and 672 (1,2%) involved foreign vehicles. Car Pass also states that the odometer deviation was greater (average 75 000 km) for vehicles from abroad than for Belgian fraud gavels (average 50 000 km).

It could just as well be that a dashboard was replaced because that was the only economically viable repair, given the market value of the vehicle. The rest of the ‘Car Pass Top 10’ is also mainly about vehicles of ten years old and more, with an extreme of a 1996 Mercedes.

Odometer readings are reversed to optimize the market value of a vehicle and this is much more profitable with (very) young second-hand cars than with older ones with a much lower market value. That is why Car Pass’ list is almost irrelevant. It is now much more complex to ‘harvest’ kilometer readings from young vehicles.

For one thing, they do not have to go to the technical inspection (where the odometer reading is recorded) during the first few years, and they also come to the workshop much less often for service or repairs. Therefore, for such vehicles, it is much easier to (digitally) manipulate the odometer.

Since January 2020, car manufacturers are also obliged to communicate the odometer readings of their connected vehicles four times a year. Despite the obligation, not all brands do this systematically.

They indicate that they are unable to do so because of privacy legislation. On the other hand, there is also a growing number of consumers who experience more disadvantages than advantages from the connected services and who, by extension, deactivate these functions.

Import second-hand cars on the rise

The most recent figures from mobility federation Traxio show that both sales of new (-28,3% compared to 2021) and used vehicles (-17,9% compared to 2021) continue to decline. It should be noted that 2021 was also a disaster year compared with the situation in 2019 (pre-corona).

The supply of used vehicles is stagnating because hardly any new vehicles are being delivered, which means that the used car market is drying up. Private consumers prefer used cars with gasoline engines but they are scarce, which makes the import market grow. For sellers, it is also a lucrative business because second-hand prices have risen by more than 10% in recent months.