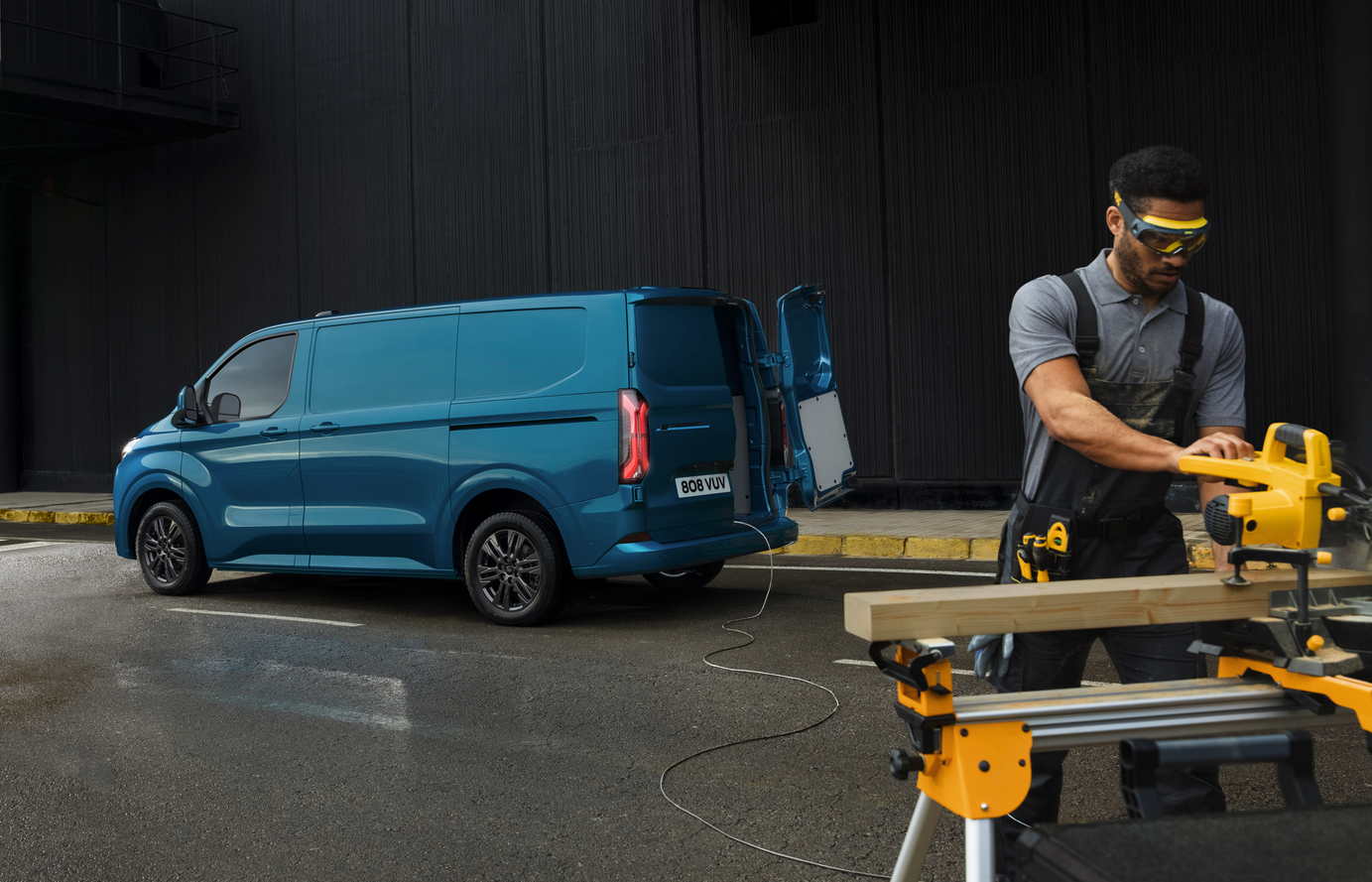 As promised, Ford has unveiled the first details of the new all-electric E-Transit Custom that like its big brother comes with Pro Power Onboard function to plug in power tools /Ford Pro

We were allowed a sneak preview in a black box in Barcelona last week, but now it’s here for the whole world to see: Ford’s second all-electric van, the one-ton E-Transit Custom. Besides the exterior looks, there is still little specific information, except for the 380 km range of the EV and the ability to plug in power tools on 240V AC power.

One thing not mentioned in the official press release is the van’s new dimensions. Without giving any specific figures, Ford Pro boss Ted Cannis said at the sneak preview the new Custom would be less high than its predecessor (under two meters) to enable access in garages in the city and somewhat wider to compensate for load volume.

Interesting is the integrated eco-system of fleet software and services Ford Pro offers, even integrating the competition’s vans. But it is obvious it will inherit a lot from its flagship big brother, the E-Transit, which is packed with all modern driver aid systems. Euro NCAP even awarded it gold for that.

The smaller Transit Custom, with a load capacity of one ton, is Europe’s most sold van today, according to S&P Global New Registrations data for 2021. There was a plug-in version already, but a fully electric one is a first for Ford. Like the ‘full size’ Transit with a gross weight ranging from 3,5 to 4,25 tons and a load capacity of 1 758 kg.

We’ll have to wait for September for Ford to unveil more technical details of the E-Transit Custom. Still, with the hints the carmaker already gave about the range, the availability of the Pro Power Onboard- function (to connect tools and appliances), and DC charging, we can imagine what to expect more seeping through from the flagship.

The Ford ProPower Onboard function you’ll also find in the F150 Lightning can provide up to 2,3 kW of power in the cockpit or the loading space of the van to power up tools. That comes in handy on remote sites where no grid power is available.

The E-Transit comes with a 68 kWh (usable) battery that should give you a range of 317 km (WLTP). We’ll likely find the same battery configuration in the Custom, extending the range of the lighter vehicle to 380 km (WLTP), as mentioned in the press release. It’s expected to get a powerful electromotor like the E-Transit for a vivid road experience, like the bigger E-Transit we drove.

Another feature that it is likely to inherit is the charging capacity. The E-Transit can be charged at 11 kW with the onboard AC charger from 0 to 100% in around eight hours. DC Fast-charging is available up to 115 kW, suitable for going from 15% to 80% in approximately 34 minutes.

And without doubt, Ford will be offering the connectivity of the bigger brother. Each van comes standard with the FordPass Connect modem enabling it to keep track of the vehicle in the brand’s telematics software platform.  Expect all the whistles and bells of a modern car regarding driver aid systems.

While the bigger E-Transit is now constantly rolling off the production lines in Ford’s Otosan factory in Kocaeli (Turkey), production of the E-Transit Custom will start in the second half of 2023. Ford invested more than 2 billion in that factory to convert it to build the new generations of electric vans designed as an EV from the ground up.

The next-generation 1-ton commercial vehicle from Volkswagen to succeed the Transporter will also be built at the same factory as part of the Ford-Volkswagen Alliance.