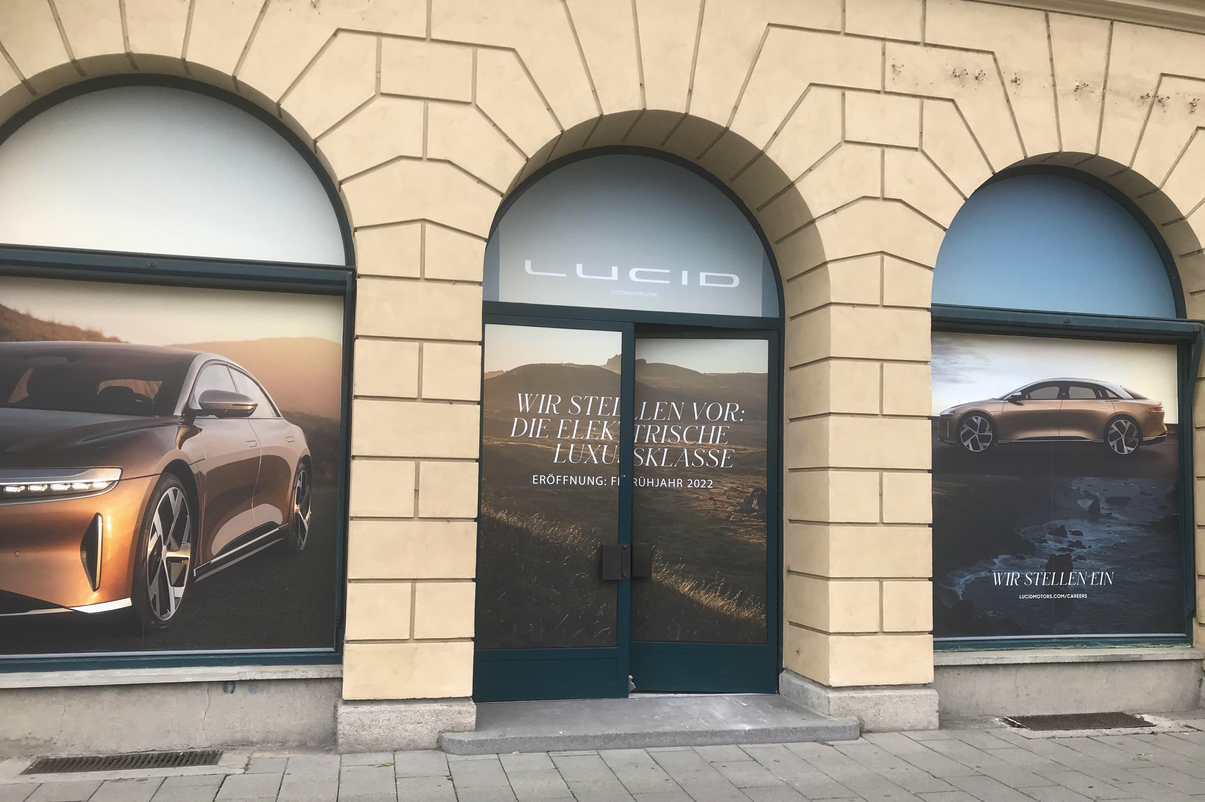 Californian EV maker Lucid Motors is opening its first Studio outside the American continent in Europe, at the Odeonsplatz in Munich on Friday May 13th /Lucid

Californian premium EV maker Lucid Motors is landing in Europe on Friday, May 13th, with the opening of its first Studio outside the American continent in Munich, Germany. In an introduction video, the company announces that it will start delivering in Europe in June or July. Lucid also mentions a plan to set up its EU headquarters in Germany, as it is the home of many premium brands.

The American EV start-up faced production delays in its brand new factory in Casa Grande, Arizona, due to chip shortages like many other carmakers. But for Lucid, it was also challenging to get the ‘class canopy and carpet components’ for its cars, which hurt production. That forced Lucid to lower its production expectations for 2022 from 20 000 units to 12 or 14 000 units.

The first Lucid electric sedans were rolling off the assembly line end of September 2021. Lucid Motors started to deliver the first of the 520 special Lucid Air Dream Edition vehicles in the US by the end of October and the Air Grand Touring in April 2021. But these deliveries got delayed by the shortages, and production is ramping up now, the company says.

Dream Edition only for the US

The Dream Edition is the ‘nec plus ultra’ in the model line-up at $169 000 without the €7 500 US tax bonus and was sold out in no time and delivered exclusively in the US. The Lucid Air can cover a distance of 520 miles – or roughly 837 kilometers – in its Range version on a single charge.

In the US, customers can expect deliveries of the latest version of the Lucid Air the company announced, the Grand Touring Performance, in June. In Canada, that will be August. This luxury sedan features dual motors with 1050 hp power and an EPA range of 446 miles (717 km).

For Europe, the first step is opening the Munich Studio at the Odeonsplatz 2 on Friday. It is Lucid’s 19th Studio opening, with two in Canada and 16 in the US already. The Studio will be open to the general public during working hours or by personal appointment.

Lucid Motors, the brainchild of ex-Tesla S Chief Engineer Peter Rawlinson, has been warming up Europe for the brand crossing the Atlantic in 2022 with a direct approach to potential clients for a few months.

People who have shown interest get a ‘personal advisor’ assigned who helps them online in a 3D-car configurator called Lucid Studio Live with answers to – most but not all – their questions. Two of the most asked questions remain unanswered: when and at what price in Europe? In the video, Lucid now confirms it will be June or July, but no European prices yet.

Registered in the Netherlands

Lucid Motors Europe has been registered in the Netherlands (Schiphol) since 2021. Still, in the video, it’s mentioned Germany will be rather the company’s preferred location for its headquarters on the Old Continent.

Through its website, people in 17 countries beyond the United States can ‘reserve’ their Lucid Air with a downpayment of €300 for the basic Pure and €900 for the Touring or Grand Touring models.

These countries include Austria, Belgium, Denmark, Finland, France, Iceland, Italy, Monaco, the Netherlands, Norway, Spain, Sweden, the UK, and Switzerland in Europe, plus Canada, Saudi Arabia, and the United Arab Emirates. In addition, there is a ‘waiting list’ for other countries you can subscribe to.

Saudi Arabia is quite keen on the Lucid, as the Ministery of Finance of the kingdom signed an order for 15 000 Lucid cars to be delivered from 2023, with an option of 50 000 units more of different models, within the next ten years.