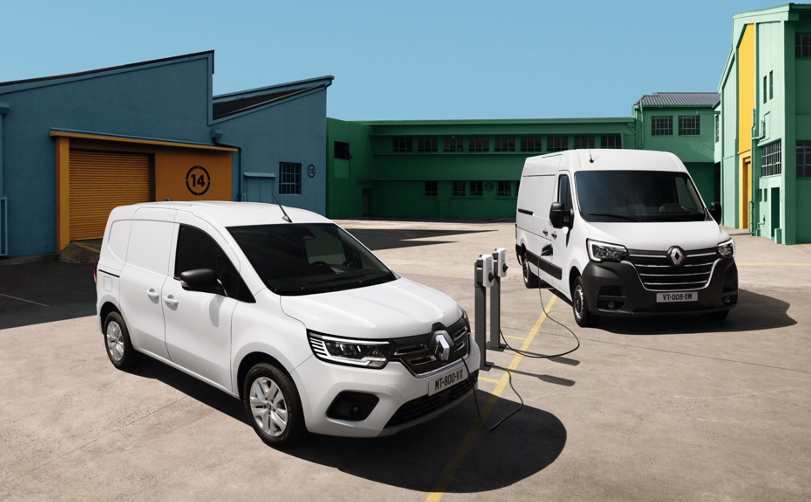 Renault is widening the range of electric vans and offering an almost modular choice of charging modes, making the vehicles much more user-friendly / Renault

Renault is extending its range of electrically powered vans with an EV version of the latest Kangoo, the Rapid E-Tech Electric. The arrival of an electric version of the newest generation Kangoo is a logical step. After all, the manufacturer also has a Master E-Tech Electric on offer in the larger van segment.

This Kangoo Rapid E-Tech Electric will cost € 29 925 euros (excluding VAT). It will be marketed in France in the first phase; the Belgian market launch is planned for the end of 2022, but it can be ordered from June onwards.

The van version of the electric Kangoo will be launched in the classic body length with a load capacity of 3,9 m3 and can carry a weight of up to 600 kg. There will also be an extended version that offers 1 m3 extra space and 200 kg extra load capacity ( max. 800 kg).

Interestingly, these compact vans can tow a trailer of up to 1 500 kg, which is more than the traditional internal combustion engine versions. There will also be a passenger car variant with an electric drive. Mercedes and Nissan, which market the Kangoo under an alternative model name (T-Class and Kubistar), will also be entitled to this electric variant in due course.

The second-generation electric Kangoo is entitled to a more powerful drive. The electric motor, produced by Renault itself, delivers 90 kW and a respectable torque of 245 Nm. The French manufacturer is planning a battery with a capacity of 45 kWh, which should make a WLTP driving range of 300 km possible.

The standard version gets an 11 kW three-phase AC charger that can charge the battery to 80% in 2 hours and 40 minutes. Optionally, Renault offers a more powerful 22 kW AC charger (as in the first generation Zoe). Moreover, as faster chargers generate more temperature, the same 45 kWh battery is cooled with water instead of air.

This version is also entitled to a heat pump, which is an option on the regular version. A third option (in combination with the 22 kW AC charger) is a DC fast charger where the car accepts a DC charge of up to 80 kW, good for 170 km of driving range in 30 minutes. As with the electric Mégane, Renault offers a wide range of charging options, allowing consumers to choose the solution that meets their needs and capabilities.

Along with the launch of the E-Kangoo, Renault is optimizing the Master E-Tech. With a 57 kW engine and a 52 kWh battery, it now has a WLTP driving range of over 200 km. The standard version has a 7,4 kW single-phase AC charger, while the optional 22 kW DC charger gives a range of 50 km in 45 minutes.

Renault will offer the updated Master E-Tech Electric in 15 versions – with a choice of three lengths and three heights and gross vehicle weights of 3,1 and 3,5 tonnes at launch. A variant up to 3,8 tonnes will be added later. The four panel-van variants offer a load volume of eight to 15 m3.