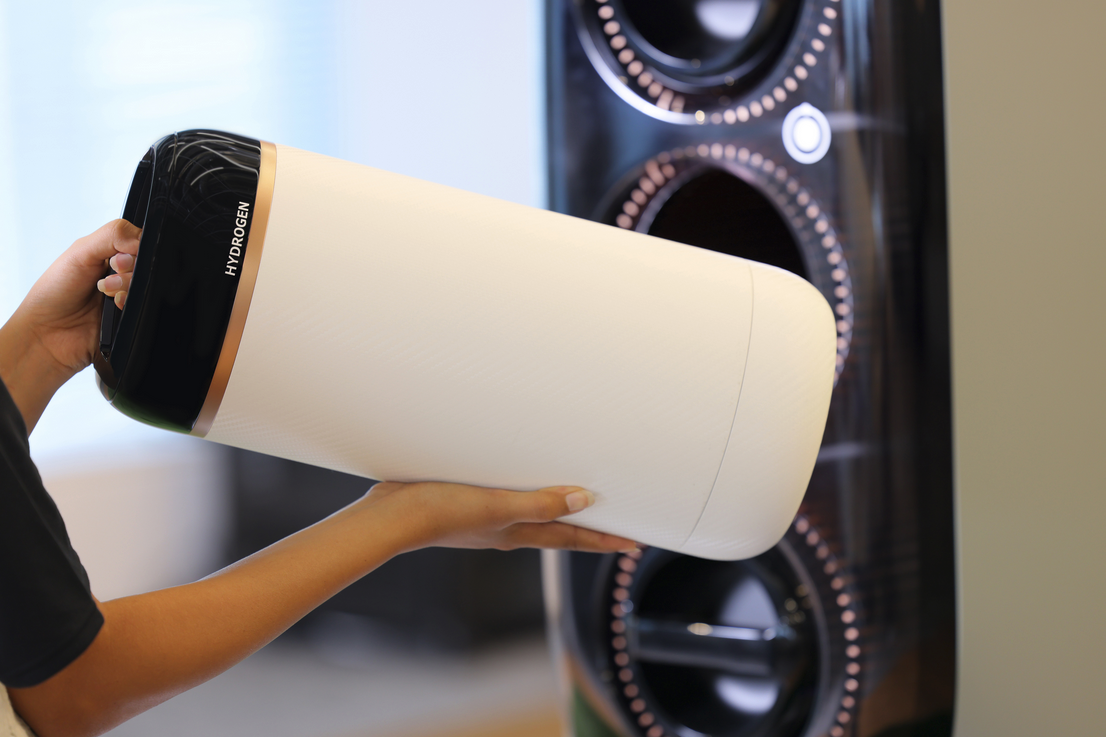 The prototype hydrogen cartridge with a target weight of 5 kg, should be easily swappable in all kinds of applications /Toyota

Toyota and its subsidiary Woven Planet Group have developed a prototype of a portable hydrogen cartridge of 5 kg with 3.3 kWh output. This could become an easily swappable alternative for batteries in all kinds of applications in and around the home, from powering household appliances and heating houses to fuel cell bikes and cars or drones.

The development is part of Toyota’s ambitious plan to build a completely sustainable city based on hydrogen energy to house its researchers and their families. Woven City, at the foot of Mount Fuji, is pioneering a profound evolution in how societies of the future live, work, play, and move, Toyota says.

Lab for all future technologies

It has become a giant laboratory for all future technologies like autonomous driving, robotics, and artificial intelligence (AI). The portable hydrogen cartridge is one of the first new developments coming out of that insight. Toyota and Woven Planet will conduct Proof of Concept (POC) trials with the cartridges in various places, including Woven City.

The prototype’s dimensions are 400 mm in length and 180 mm in diameter, with a target weight of five kilograms when filled with hydrogen. According to Toyota, this will, for instance, allow a microwave oven to run for 3 to 4 hours on one cartridge, generating electricity by a typical fuel cell system.

But you can imagine a myriad of other possible applications, including fuel cell cars with swappable cartridges, as Toyota’s Mirai recently proved to be able to run 100 km on only 0,55 kg hydrogen in ecological conditions or roughly 1 kg for 100 kg in all-day circumstances.

“Together with inventors and those living within and around Woven City, we will continue to advance mobility over time by constantly developing more practical applications for hydrogen cartridges. In future Woven City demonstrations, we will continue to improve the hydrogen cartridge itself, making it increasingly easy to use and improving the energy density,” Toyota says.

The ultimate goal of this project is to realize a carbon-neutral society where everyone can access clean energy, first in Japan and then throughout the world, the Japanese say. And Woven City is at the frontline of this.

Woven City is currently being built at the foot of Mount Fuji (central Japan). The purpose is to test innovative products in the real world. Initially, there will be 360 inhabitants; later on, some 2 000. Inventors and employees of Toyota will be the guinea pigs of the program.

The city’s layout is designed by Danish architect Bjarke Ingels, known for the Two World Trade Center in New York, the new Google headquarters in California, and several skyscrapers in San Francisco and Vancouver.

The building structures are mostly made of sustainable wood and integrated as much as possible into the surrounding nature with lots of green and streets explicitly designed for fast transport, slower mobility, and pedestrians.

Only electric and fully autonomous cars will be driving around the city. Inside the houses, robots are to assist the residents in all-day life, and artificial intelligence is used to monitor the health of the inhabitants constantly.